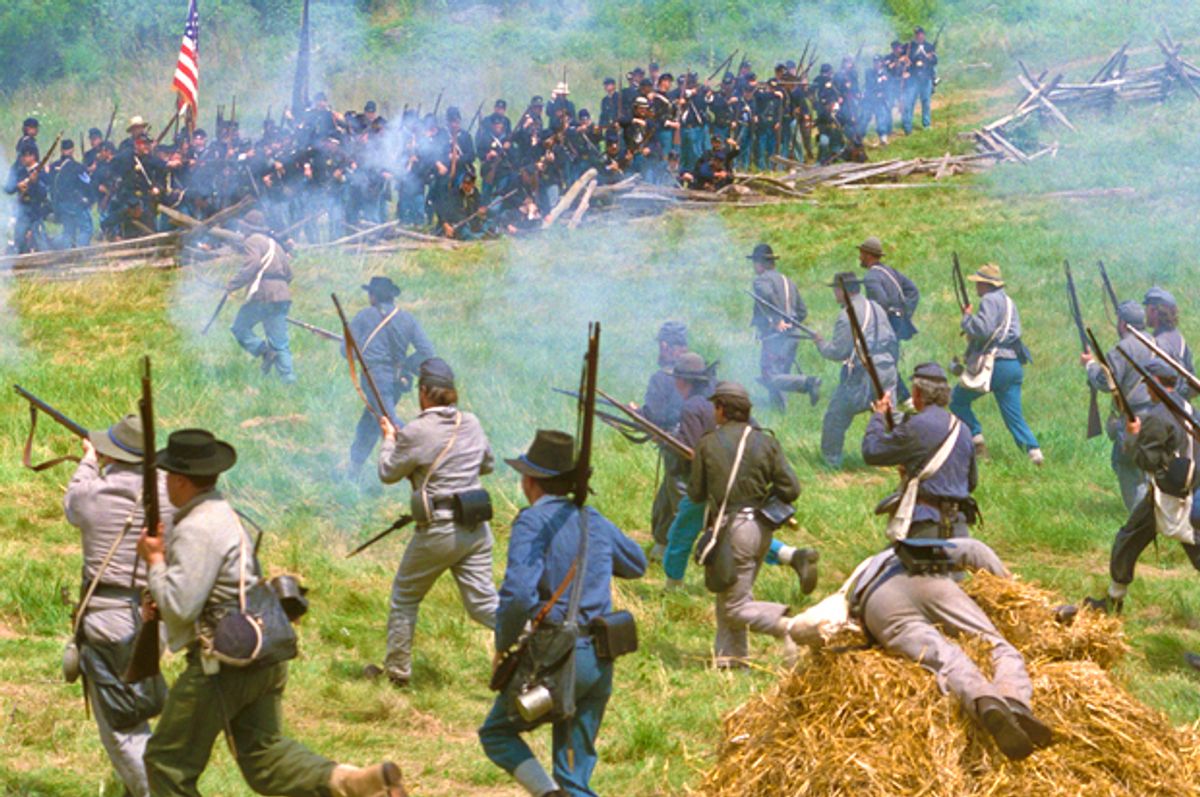 As the debate over taking down Confederate monuments continues to rage on, a question inevitably emerges from the intense debate:

Is the Civil War really over?

To find answers, Salon spoke with Peter S. Carmichael, director of the Civil War Institute at Gettysburg College. In the course of that conversation, Carmichael observed that not only have the core elements of the Civil War continued to divide our society in the 152 years since the war supposedly ended, but that even well-intentioned people on the left aren't doing their part to effectively address those issues.

"Racial attitudes have always been there and they take on different forms and different expressions, so we can't ever speak of a single expression of white supremacy," Carmichael pointed out. After observing that Trump's presidency has led to a heightened awareness among the left about various types of racial discrimination, he noted that they have been blinded by their rage against Trump and the alt-right into missing larger and more important issues.

"Being able to identify and address the origins of inequality across racial and class lines. specifically what happened in Charlottesville — there are a few hundred Klansmen from across the country, including Nazis and other members of the alt-right -- despicable people who used a Confederate monument as a stage," Carmichael said. "That message needs to be rebutted and refuted at every point."

He added, "What unfortunately happened was that the press unwittingly, with elements of the left, brought attention to this group and conflated their agenda, their objectives, with Confederate history. So what we have now is a failure now to understand and recognize the source of discrimination in housing, the denial of black political rights, the inhumane treatment of young black American men in our prison system.

"Those issues should be front and center. Those issues, though, have been pushed aside while people feel this great rage toward Trump. But in their rage, in their hate, they have been blinded to the sources of inequality in our capitalist society."

Carmichael's point here is arguably essential to any meaningful discussion about how and why the Civil War is relevant today. Even though the Confederacy collapsed and surrendered in the spring of 1865, that didn't mean African-Americans were suddenly granted equal rights. For a century they remained legally inferior to white citizens throughout much the country, and subject to informal discrimination and segregation policies virtually everywhere. Even after Jim Crow policies were formally outlawed during the 1960s, many other institutions that perpetuated racism remained in place.

These included, as Carmichael pointed out, persistent discrimination in housing, policies intended to limit minorities' voting rights, and the rise of a militarized police force and prison-industrial complex that is specially designed to target and incarcerate people of color.

If we are going to talk about how the Civil War persists today, then we must begin that conversation by acknowledging that while slavery was abolished by President Abraham Lincoln with the passage of the 13th Amendment, systemic racism that can be traced back to that system remains very much in place.

And what about the Confederate monuments themselves?

"It is absolutely true ... that the Confederate cause was inextricably linked to slavery. As I ask you and others who want to remove those monuments, how can I as a public historian go to a historic site and say, 'This is what the war for emancipation and union was against.' You have now taken that away from me. And you have made a false assumption and you have underestimated people in how they view the past. You have underestimated people's ability to take a look at those monuments and to judge for themselves that they were historical figures who were flawed but who were products of their time."

I respectfully disagree with Carmichael's position here — at least when it comes to the notion that the Confederate monuments aren't fundamentally celebrations of white supremacy — but he raises a valid point about how figures like Robert E. Lee and Stonewall Jackson need to be viewed as products of their time.

That's not about excusing their behavior. Rather it's because viewing the men and women who fought for evil causes in the past as themselves monstrous, we make it easier to ignore the evils which we may tolerate or perpetuate in the present.

If we are to make progress in eliminating the inequality and injustices that came to such a violent head during the Civil War, and which have persisted ever since, then we need to remember that much of what we take for granted in our own era will be justifiably condemned by future generations. To fight those injustices now, we need to approach them not from a perspective of self-righteousness, but one of humility.

Unlike Carmichael, I believe the Confederate monuments should be taken down. But I agree we should that we regard the figures that they memorialize not with sanctimony but humility, by thinking about how many people today — not just the Lees and Jacksons of our era, but our friends and family and perhaps even ourselves — hold beliefs comparable to theirs. Whether we want to admit it or not, the war that they fought is not over. Pulling down a few statues won't be enough to end it.