Diamonds in the sky: Uranus isn't the only planet in the universe raining treasures

A primer on how valuable things end up in remote parts of space, and why Earth isn’t like the rest of the universe 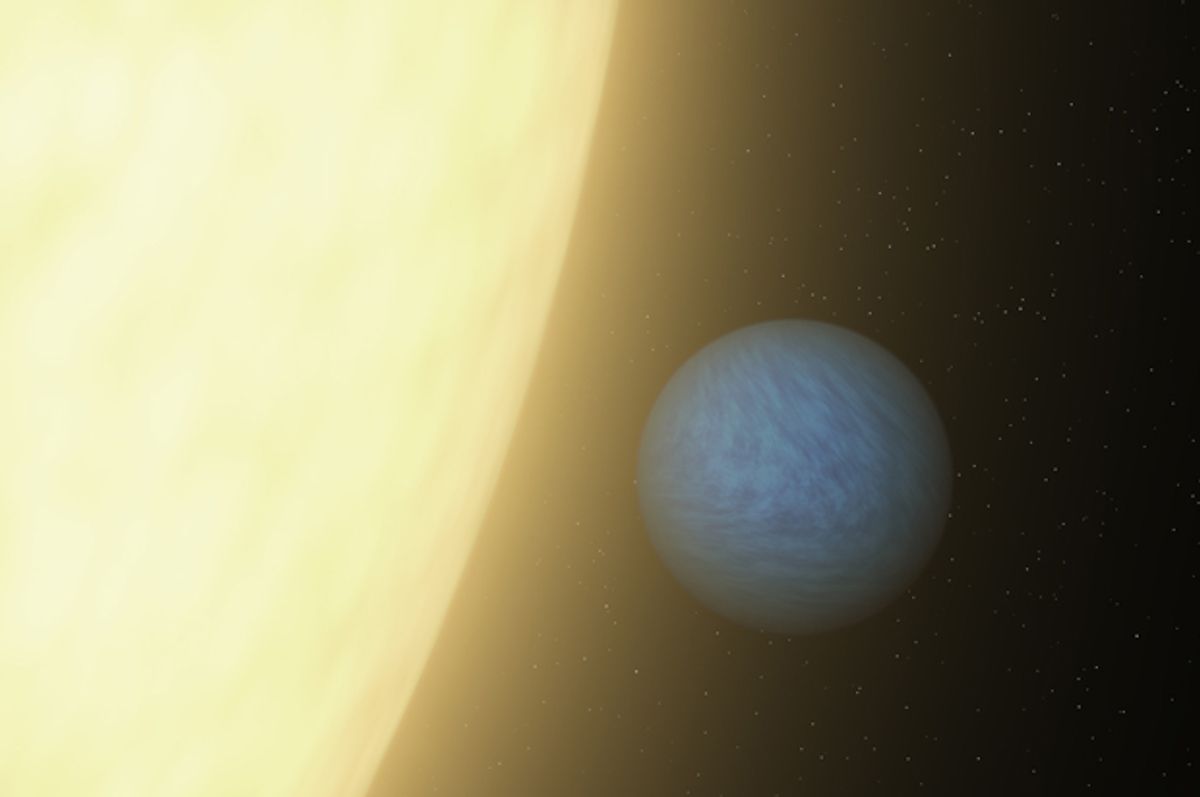 If you happen to find yourself suspended in the thick atmosphere of Uranus or Neptune, you’ll want to opt for a shield rather than an umbrella. A study this week from scientists at the Stanford Linear Accelerator Center (SLAC) simulated the conditions within the so-called ice giants — the cerulean planets Neptune and Uranus, whose atmosphere consists of hydrogen and helium but also hydrocarbons like methane. By blasting a powerful laser through a polymer — simulating the conditions within the ice giants’ dense atmospheres — scientists witnessed their simulated conditions explode into tiny diamonds, suggesting that Neptune and Uranus’ atmospheres may create the wedding band-worthy carbon allotrope in their everyday weather patterns.

This science is bizarre enough on its own, and the suggestion that Uranus might rain diamonds makes for great headlines. Yet given that there are many similar ice giants scattered all over the galaxy, this suggests that diamond-raining is quite common in the universe, even though it’s unheard of on Earth. Indeed, because of our Earthly perspectives, many things that are quite normal in the universe seem anomalous, particularly when mined for their sensational aspects in a brief news dispatch.

What is normal in the universe and strange on Earth? Take helium, for example: it’s almost nonexistent on Earth, as it is so light it escapes our atmosphere easily — and yet 25 percent of the elemental matter in the universe is helium. The opposite is true, too: There are many anomalous things about Earth compared to the rest of the solar system. Life, for one, but also plate tectonics and our unusually large moon for a rocky planet. Perhaps two planets in the solar system have diamond rain, but only one has humans. Which is weirder?

Diamonds floating in ice giants make for good headlines because diamonds are something humans tend to treasure. And yet there are many pretty weird, seemingly valuable (to us) things floating around in space. Still, many news dispatches about strange planetary conditions focus on those worlds individually, as though they exist in a vacuum — which they do, technically. But that ignores how these kinds of strange discoveries tie into a larger story of how solar systems and galaxies evolve over time. I’ve compiled some of the strangest astronomy discoveries that involve the rare things that we treasure here on Earth, while telling the story of how said oddities come to be.

Gem precipitation sounds nice, but what about a world made of diamond? 55 Cancri E is a literal gem of a planet. The planet orbits a neutron star — a collapsed sun with so much mass that its protons and electrons merged into neutrons. Neutron stars are kind of like giant atoms, with their neutrons bound in similar close quarters as the particles in atomic nuclei. Hence, neutron stars are so dense that a teaspoon of neutron star material would weigh 10 million tons, the equivalent mass of 130 million humans or so.

55 Cancri E’s neutron star, known as PSR J1719-1438, is only 12 miles in diameter, yet possesses a mass 140 percent of our sun’s. Neutron stars’ surfaces are generally hundreds of thousands of degrees Celsius, hot enough to radiate X-rays. They are not pleasant stars to orbit.

The peculiar planet orbiting PSR J1719-1438 has a mantle that may be mostly diamond. That’s because the planet’s composition contains high levels of carbons, which, at the pressures and temperatures that it is exposed to, would suggest that its carbon has crystallized and compacted at the appropriate temperatures to render it into diamond.

But there are two epilogues to 55 Cancri E’s story. First, some later observations called into question whether the diamond hypothesis theory was correct, as one study suggested the star had more oxygen than accounted for — which does not turn into diamond, or anything like it, under high pressures.

But the star also became peculiarly politicized when one of 55 Cancri E’s celebrated co-discoverers, Matthew Bailes of Swinburne University of Technology, wrote an op-ed decrying out the double standard in public discourse faced by climate scientists as opposed to astronomers.

It may come as a big surprise to many, but there is actually no difference between how science works in astronomy and climate change -- or any other scientific discipline for that matter. We make observations, run simulations, test and propose hypotheses, and undergo peer review of our findings. [...] Sadly, the same media commentators who celebrate diamond planets without question are all too quick to dismiss the latest peer-reviewed evidence that suggests man-made activities are responsible for changes in concentrations of CO2 in our atmosphere. The scientific method is universal. If we selectively ignore it in certain disciplines, we do so at our peril.

The longest stretch of alcohol on Earth is probably the two-mile beer pipeline that runs under Bruges, Belgium. In space, astronomers have observed multiple giant clouds of alcohol — methanol, the toxic stuff, and ethanol, the drinkable stuff — including one  that is about “a thousand times the diameter of the solar system,” according to a New York Times report from 1995.

In 2006, astronomers at Jodrell Bank Observatory found a 288-billion-mile-long cloud of methanol around a nebula. Drinking it might make you go blind, but then again, opening one’s helmet to get a taste would yield other problems.

Finding alcohol molecules in space is strange, given that it’s an organic molecule, but these alcoholic clouds are not formed by distant life forms distilling gin. Rather, alcohols like methanol and ethanol are relatively simple compounds of carbon, oxygen and hydrogen, which are rather abundant elements in heavy stars; hence, scientists believe that they formed naturally — on the surface of nebular dust grains that stuck to the stray hydrogen, oxygen and carbon molecules, and served as a catalyst for the reactions that would bind these molecules to create alcohols.

Our solar system was once a nebula — a giant cloud of gas and dust left over from the wake of an exploding star. Slowly, this stellar nebula coalesced into the sparse solar system we know today, with rocky planets, gas giants and a single central star. We know now that this process happens all over the universe, and there are many solar systems like ours with similar planet distribution and composition.

Yet because of the way that our solar system formed, the distribution of resources on Earth differs from the overall distribution of resources in the universe. As I mentioned earlier, there’s a lot of helium in the universe, and almost none on Earth. Similarly, many metals like neodymium, gold and platinum — exotic on Earth — are much more common in the asteroid belt, which consists of many giant rocks whose metallic surfaces never conjoined with any planets. Many of these asteroids have a mining value that is far greater than the wealth of our entire world. One enthusiast website, Asterank, is devoted to cataloguing asteroids, and includes a means of sorting them by how much their metals are worth. Many are in the trillions.

Asteroid mining isn’t something that humans have done yet, and it still seems prohibitively expensive. Also, ethical questions abound: Would said mining be done by private corporations? If mining companies drag asteroids closer to Earth, how do we mitigate the risk of them careening into our planet and killing everyone? Does it make sense for a single asteroid-mining corporation to amass more private wealth than exists on Earth? These are theoretical questions for now, but they speak to the issues raised by such a prospect.