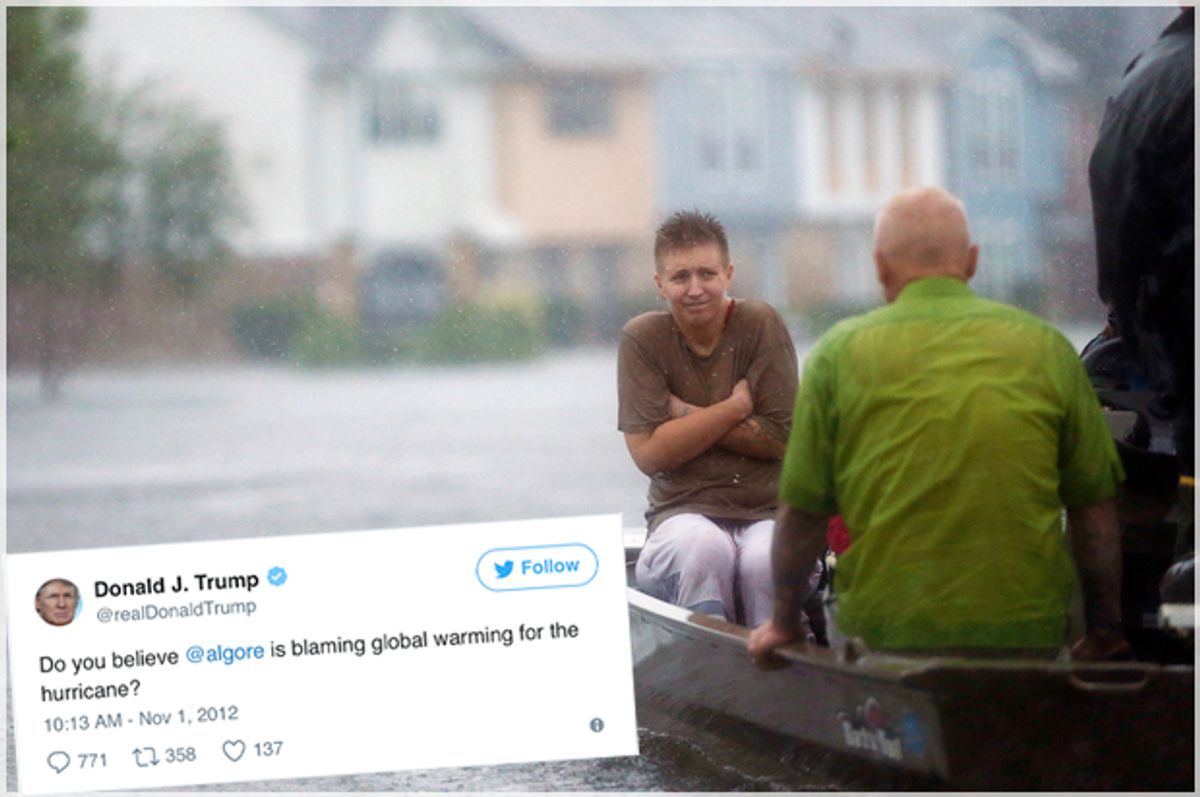 As of June, President Donald Trump had tweeted his skeptical views about climate change 115 times. If he had any capacity for introspection (which he almost certainly doesn't), he would be reevaluating his denialism in the aftermath of Harvey, the tropical storm that has brought flooding and devastation to the Texas Gulf Coast.

In March of last year, ProPublica published an article that seems downright ominous in light of the devastation wrought by Harvey on Houston and neighboring areas of Texas. "Houston is the fourth-largest city in the country," the piece warned. "It's home to the nation's largest refining and petrochemical complex, where billions of gallons of oil and dangerous chemicals are stored. And it's a sitting duck for the next big hurricane."

As it turns out, one major factor that could also have also contributed to this storm has received surprisingly little attention — man-made climate change.

"Harvey is an example of precisely the sort of thing we’ve been warning about: more intense storms with bigger storm surge, more moisture because of a warmer atmosphere, leading to much greater rainfall and flooding," climatologist Michael E. Mann told Salon via email.

Mann also said it's possible that climate change made the storm linger in place longer and made its effects more severe, although that remains a contentious area of research. "There are some tentative connections between climate change and stalled weather systems suggesting that climate change could have played a role in the way the storm got stuck in place," he wrote. "But, as I said, that is much more tenuous and at the cutting edge of what we can currently say from the science."

Climatologist Kevin Trenberth made similar observations. "Sea surface temperatures are higher because of climate change and that contributes to the intensity and amount of precipitation with regard to Harvey," Trenberth told Salon.

Andrew Dessler, professor of atmospheric sciences at Texas A&M University, said that more government regulation on the development of wetlands and prairies could help coastal communities deal with the inevitability of strong storms, but he was pessimistic that any action would be taken because of Harvey.

"I'm afraid that we're doomed to just repeat these disasters, one after the other, because we just won't tolerate the government doing anything to save us from ourselves," Dessler said. "That's in some sense why nothing ever happens on this because people are so opposed to government regulation. The government needs to come in and say, 'Look, you cannot develop this area that we know is going to flood.'"

Climate scientists knew this storm was coming -- and also know that more and bigger storms are on the way. We can only hope that Harvey will force this president (or the next one) to listen to them.