I stuff my mouth to cope with Donald Trump

The politics of protest food 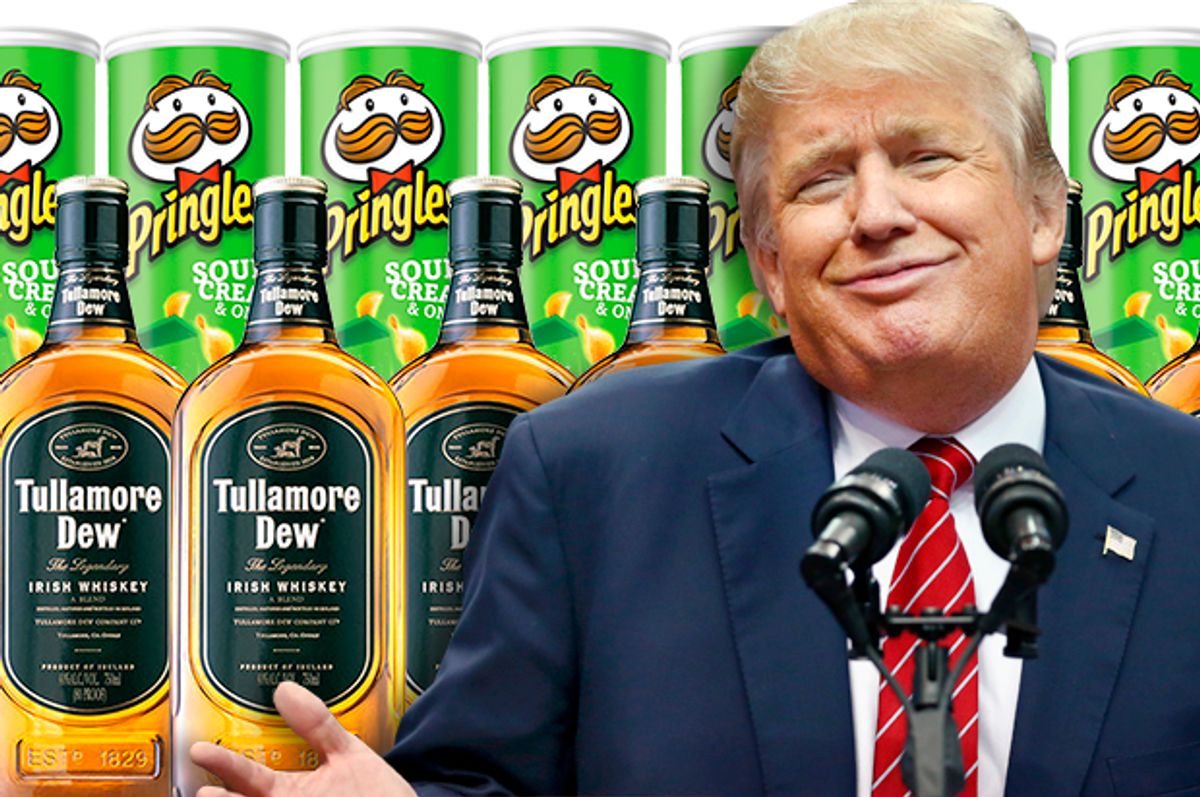 When Tina Fey introduced "sheet-caking" to the world, she spoke a truth that many of us have been reluctant to admit. In her most recent "Saturday Night Live" skit, Fey gorges on sheet cake while discussing the malevolent resurgence of Nazism in America, President Donald Trump's own disturbing attitude toward right-wing extremism and the cowardice exhibited by Republicans like House Speaker Paul Ryan. By the time "Weekend Update" co-host Michael Che decides to join her in shoveling cake into his own mouth, anyone with a soul can understand why.

The political news has only become more panic-inducing since then and many of us have found ourselves unconsciously wolfing down a doughnut or two to cope. But are we self-medicating to survive the Trump regime, or simply blaming Trump for our overeating?

While the over indulgence of junk food is hardly a new phenomenon it has proven to provide more comfort than usual in the Trump era. Though I lack Fey's now-iconic sweet tooth, I never tire of potato chips. Lay's Salt-and-Vinegar chips are my all-time favorite, followed by Pringle's Sour Cream and Onion. When Sophia and I posed this question to our Salon colleagues, we got a number of creative replies, including cookies,"anything ever made by Entenmann's," hot wings, peanut M & M's, chocolate Cheerios with chocolate, and bourbon. One colleague mentioned "Triscuits and hummus" and asked for reassurance that hummus is healthy, which I'll just go on record saying that it is. (I haven't looked up the science and am not going to, because it is, damn it!) Another joked that he eats "human flesh" — well, I hope that was a joke, at least.

Quite a few people also felt the need to mention alcohol. Wine appeared thrice (red wine "and dark chocolate immoderately," pinot noir and rosé), bourbon twice and vodka once. ("My standards about the vodka bottle in the freezer have dropped considerably, although not all the way to Mr. Boston.") Personally, I love to wash away the Orange Man blues with swigs of Tullamore Dew Irish whiskey.

So why do we turn to our comfort foods, be they sheet cake and chocolate or various delicious libations?

Susan Weiner, a registered dietitian and nutritionist, told Healthline that Trump-related stress eating "is a real thing in that the news cycle is so constant and so overwhelming and so stressful." Feeling worried about the past or future can result in mindless or stress eating.

"I think the so-called Trump 10 could indeed be real," Ohio State University health professor Janice Kiecolt-Glaser told NPR. when people are stressed, they typically do reach for the higher-calorie, higher-sugar foods that are more likely to put on pounds."

While some of us stuff our mouths to cope with Trump, stress has manifested in a lack of appetite for others. According to a recent NIH study, approximately 40 percent of people gain weight when stressed, while 40 percent decrease their caloric intake.

And stress eating can be a bipartisan phenomenon. Elissa Epel of the University of California, San Francisco, who studies the physiological effects of stress, explained that "regardless of whether people are pro-Trump or anti-Trump, most people do not like what they're seeing on the news." She pointed to a recent American Psychological Association survey that found more than half of all respondents said the current political climate is a significant source of stress.

Nervous eating. Mindless eating. Comfort eating and, okay, stress drinking. We are doing our bit to deal with hopelessness and despair, one bite, or swig, at a time.