Must-see comedies, dramas and docs about the workplace that you can't believe you've never seen or forgot you loved 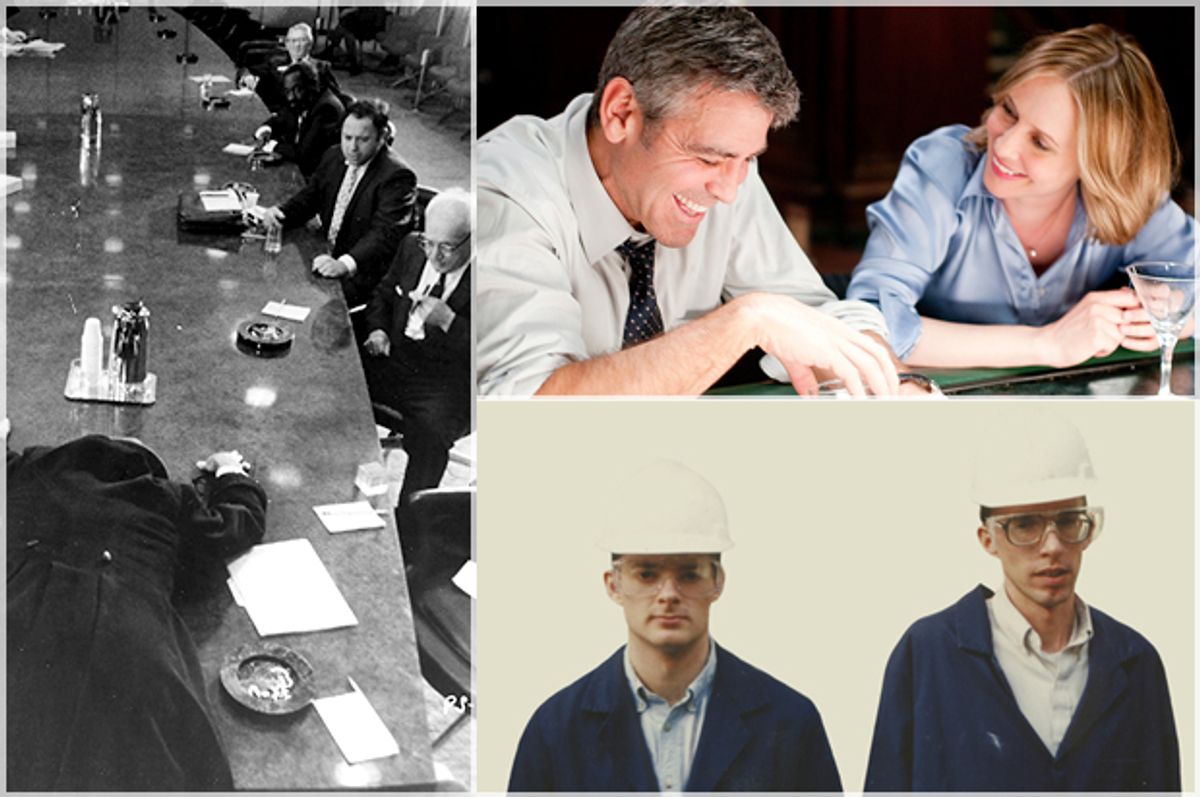 For most folks, Labor Day is a day off of work. And while most folks who go to the movies often don’t want to be reminded of their jobs, there are some great features and documentaries that depict working environments.

Charlie Chaplin’s “Modern Times” may be the most classic film about work, but in contemporary times, “Office Space” rivals “Clerks” for the best comedy about the daily grind. In the category of “bad boss” movies, “The Devil Wears Prada,” “Swimming with Sharks,” “Working Girl” and “9 to 5” all feature employees getting the best of their superiors.

So here are ten lesser-known films about work and workplace environments that deserve the extra effort to be seen. From quirky comedies to fascinating documentaries, these films are entertaining and informative.

“American Job” Chris Smith’s terrific deadpan film (that plays like a documentary) has Randy Scott (Randy Russell) taking a lousy minimum-wage job in a plastics factory (Recall that line from “The Graduate”?). However, after he gets fired, he takes a series of jobs including a dishwasher at a fast food restaurant to motel housekeeper and telemarketer. Each employment opportunity provides mind numbing repetitive but skilled work for low pay, as well as a series of restless co-workers that are both amusing and irritating. “American Job” was made years before Barbara Ehrenreich’s landmark book, “Nickel and Dimed,” and Mike Rowe’s TV show “Dirty Jobs,” but like those far more famous works, it shows the incredible efforts required to do menial tasks and the mindset of the people who do them.

“Bartleby” Adapted from Herman Melville’s story, “Bartleby the Scrivener,” this offbeat comedy has the title character (a terrific Crispin Glover) answering, “I would prefer not to” when the Boss (David Paymer) asks him for help with something. Bartleby further explains that he has given up working. I could tell you more about this film, which is very good, and darkly comic, but I would prefer not to.

“The Boss of It All” Danish filmmaker Lars von Trier’s corporate comedy has vain Danish actor Kristoffer (Jens Albinus) posing as Svend, a non-existent IT company president, just so the business can be sold to Finnur (Fridrik Thor Fridriksson), a frosty Icelander. However, a series of reversals delay the deal, allowing the staff to finally meet and interact with their “boss,” who has been unseen until now. Many of these encounters are funny; one employee punches Svend, others have sex with him, some have miscommunications. Nevertheless, when Kristoffer’s ex-wife (Sofie Grabol) is introduced as Finnur’s lawyer, this enjoyable film takes off with some fun twists involving who exactly is conning whom.

“Canned Dreams” This remarkable documentary takes viewers around the world to show ordinary people doing various jobs that ultimately produce a single product. There are Brazilian miners, Romanian men who work in a slaughterhouse, French workers on an assembly line, Italians and Portuguese working in fields, and more. What emerges is a shrewd commentary on globalization and how each country contributes to the product’s end result. But more importantly, it is why these workers do these often-unpleasant jobs (the worst involve animal slaughter): it is usually so their children can have a better life. As they recount their hopes and dreams, viewers will be empathetic. As the final shot reveals what everyone is working to create, viewers will reevaluate their thoughts about what is contained in that particular can.

“Fast, Cheap & Out of Control” Errol Morris’ documentary is about four men who all love what they do. Dave Hoover is a wild animal trainer; George Mendonça is a topiary gardener; Ray Mendez is a mole rat specialist; and Rodney Brooks is a robot scientist. These men talk passionately about their work, the challenges of it, how they problem solve, and what they discover and have learned about human and animal natures, behaviors and rules. They have all found the best way to do what they do, but more importantly, they each find themselves in another social animal. Viewers can’t help but identify with one of the men, which is what makes “Fast, Cheap & Out of Control” so universal.

“Equity” This juicy little indie is for anyone who wants to see that glass ceiling shattered. Female investment banker Naomi Bishop (Anna Gunn) loves money and taking companies public. While she has had setbacks before, working on a new IPO, she becomes a target not just of competitors who want to see her fail, but also finds herself under investigation by her former friend Samantha (Alysia Reiner). As a security breach scandal broadens, a series of betrayals and reversals of fortunes keep Anna, and viewers, on tenterhooks. And if the male condescension isn’t horrific, just delight in Naomi’s rant about the lack of enough chips in a chocolate chip cookie.

“In the Company of Men” Talk about a toxic work environment! Neil LaBute’s cynical, blistering comedy-drama about emotional abuse is still chilling more than two decades later. Chad (Aaron Eckhart) is a junior executive who coaxes his colleague Howard (Matt Malloy) to play catch-and-release with the vulnerable Christine (Stacy Edwards), a deaf colleague. Their scheme is designed to make themselves feel better; these straight white men certainly aren’t welcoming to women or minorities — just watch how Chad humiliates a young black trainee. Eckhart is infuriatingly amoral in a performance that established his career.

“In the Pit” the dignity of Mexico City construction workers is chronicled in Juan Carlos Rulfo’s fascinating documentary about the building of an urban freeway. Rulfo takes viewers “In the Pit” to reveal the everyday dangers of this tough work, from avoiding oncoming traffic to scaling dizzying heights. The filmmaker takes time to meet the men (and one woman) who work on the site, discussing their fears (not eating), dreams and accidents. Rulfo also distinguishes “In the Pit” with dazzling camerawork, from time-lapse sequences and pans, as well as the jaw-dropping finale, a nearly 8-minute long tracking shot of the construction project. You’ll never look at construction workers the same way again.

“Putney Swope” The opening sequence of Robert Downey, Sr.’s (dubbed “a prince” in the credits) irreverent 1969 satire has all the white, male board members of an advertising agency electing the sole African-American, Putney Swope (Arnold Johnson) to chairman. (They all voted for him because they thought no one else would). “You don’t have to accept the job . . . it’s a terrible job,” Swope is told. But he takes over. Swope doesn’t rock the boat — he sinks it, creating “Truth and Soul, Inc.” with naughty ads that are wildly successful. As Swope takes care of business, running the company in ways that reflect the era’s Black Panther movement, the white characters are treated like slaves, and Swope fires more folks than Trump did in a season of “Celebrity Apprentice.” “Putney Swope” may be a bit dated, but it is still wickedly funny.

“Up in the Air” Jason Reitman’s loose adaptation of Walter Kirn’s novel is a smart, laugh-out-loud film about downsizing. Ryan Bingham (George Clooney) is a suave transition specialist, a man who gives pep talks to downsized employees. As he explains in the film, “We take people at their most fragile and set them adrift.” While he is very good at his job, he’s rather patronizing to most of the folks he meets when he’s not working — his estranged family in particular. Clooney is slick, but not oily; he sells it all without being smug. He meets his match in Alex (Vera Farmiga, at her most delectable) and is troubled by the presence of Natalie (Anna Kendrick), a young go-getter at his company who gets him temporarily grounded in more ways than one. “Up in the Air” is terrific as it captures Ryan’s “compact living” where everything, including his emotions, is compartmentalized. Reitman never allows things to get too sentimental or sticky, and his film is graced with a trio of excellent performances.