As Americans brace for the premiere of "It," the question must be asked — Are we going to tire of evil clowns? 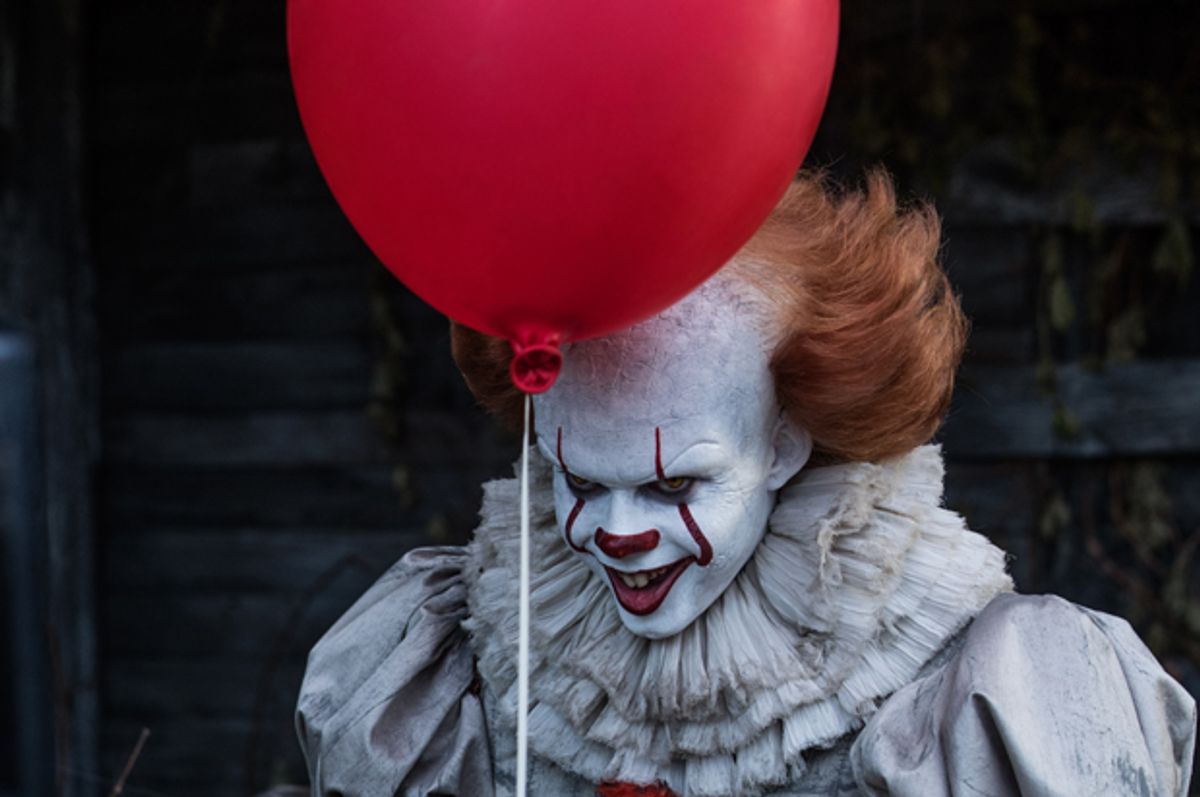 Bill Skarsgård as Pennywise in "It" (Warner Bros. Pictures/Brooke Palmer)
--

Are we ever going to get tired of scary clowns?

It certainly doesn't seem that way. With the upcoming adaptation of Stephen King's "It" on pace to clean up at the box office and real life creepy clown sightings making headlines since 2016, it would seem that American culture has reached peak coulrophobia. Yet could that ever reach the oversaturation point?

"Has the prevailing ethos that encourages a fear of clowns become oversaturated? No, definitely not," said New Zealand sociologist Robert Bartholomew in an email interview with Salon. Even though clowns were widely regarded as harmless in the 17th and 18th centuries, Bartholomew points out that "near the end of the 19th century they started to take on a more sinister veneer, and this began to slowly filter into popular culture and influence sentiments about clowns." By the Great Depression "a new type of freakish circus sideshow emerged — 'the dark carnival' featuring clowns as evil, morally perverted figures who were untrustworthy and devious." The sinister association with clowns has remained strong since then, despite the success of popular children's clowns like Bozo and Clarabel, thanks to everything from '80s killer clown movies to the infamous serial killer John Wayne Gacy.

These thoughts were echoed by psychology professor Frank T. McAndrew.

"I believe that the fear of clowns is BOTH a psychological and a cultural phenomenon," McAndrew said in his email to Salon. "We are psychologically programmed to get creeped out by things that pose uncertainty or threat to us. Clowns are mischievous and unpredictable, so they press the 'uncertainty' buttons in our brain no matter where we are from."

He added, "Having said this, our response to clowns can be magnified or suppressed by the role that they play in our own culture. In Western countries, particularly in the U.S., clowns have come to be culturally associated with serial killers in pop culture ('It,' 'Killer Klowns from Outer Space,' Zombie Clowns, etc.) as well as in real life (John Wayne Gacy). This lowers the bar for what it might take for us to perceive them as threatening."

"I do think that we have reached the limit as to how scary clowns can be perceived to be, and I expect it to die down for a while after the release of 'It' has come and gone," McAndrew wrote. "However, I also predict that the scary clowns will be back again in the future . . . "

I suspect McAndrew is right. Clowns trigger fear in a primordial part of the human psyche (see: the uncanny valley effect). When that instinctive reaction is supplemented by more than a century of cultural training telling us that clowns are not to be trusted, it makes sense that coulrophobia will continue to be a powerful force in our culture.

At the same time, it's hard to imagine the present popularity of anti-clown sentiment continuing to be this strong. Even the most tenacious pop-culture monsters find that their popularity ebbs and flows over time — from slasher killers and werewolves to vampires and zombies — and it's hard to imagine that any one trope will be able to indefinitely maintain its potency.

The best we can hope for is that the evil clown characters we get during this craze wind up being good ones. From Pennywise in the original TV film "It" to Heath Ledger's Joker in "The Dark Knight," some of our most iconic villains have donned white face paint. It would be nice if future entries into this sub-genre can live up to their standard.

And, of course, we should keep the evil clowns strictly in the realm of fiction.