The 15 scariest on-screen clowns, from worst to best

Which scary clowns worked? Which ones didn't? Let's take a look! 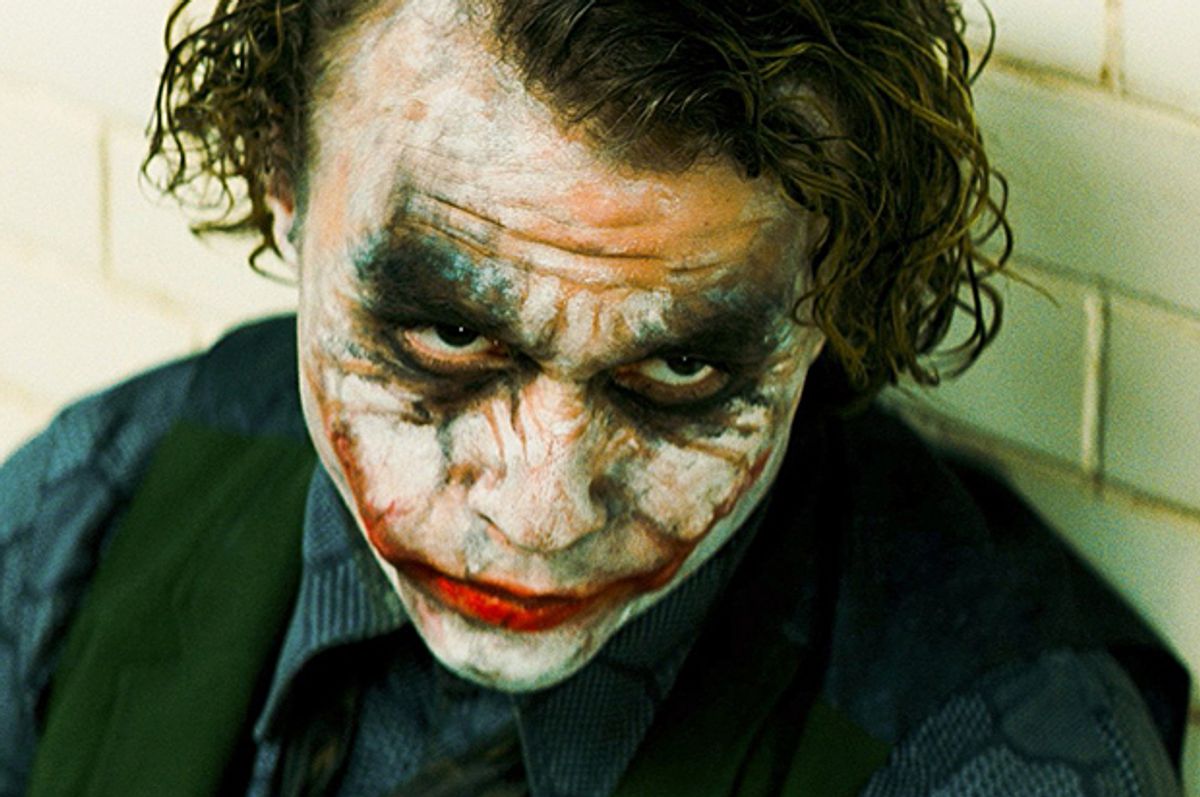 Clowns: They can delight, and they can terrify. And it's not just that sweet, innocent clowns can be creepy while simply going about their clowning business. Oh no. Filmmakers have long taken the already frightening, already dicey image of the clown and exploited it by making intentionally scary harlequins and bozos in films both dramatic and horrific. To those already fearful of grimacing performers sporting white foundation and red noses, it's almost unfair.

With the creepiest of the creepy clowns — Pennywise — now heading back to theaters in a reboot of Stephen King's "It" in theaters, it's worthwhile to delve briefly into the most notable scary clowns from film and TV from mildly amusing to darkly disturbing. Coulrophobics, you've been warned.

He isn't scary. He isn't funny. Despite the furor over having his screen time significantly reduced in "Suicide Squad," the reality is that this movie (which I liked) is at its best when he is absent. Obnoxiousness is not the same thing as humor or creepiness, a point Leto amply demonstrated.

12. The Clown Doll from "Poltergeist"

I know this is another that is likely to be unpopular, but I had to include it because I constantly hear about how terrifying it is. Personally, I always saw the clown's attack on Robbie coming from a mile away, and because it was obviously intended as a distraction from the movie's actual threat, it seems more like a plot device than a genuine menace.

11. The Killer Klowns from Outer Space

I suspect this entry will lead to backlash, since "Killer Klowns From Outer Space" is a cult classic that was met with critical acclaim. While the special effects and set design are impressive, the evil clowns themselves aren't quite campy enough to be funny or scary enough to be horrifying. It isn't a terrible movie, but it hasn't aged as well as a lot of people would like to believe.

Is he evil? No, but he lives in a world that is relentlessly cruel. While I wouldn't dare spoil the plot of the film, "Vulgar" offers brilliant social commentary about the degree to which society will degrade individuals who try to make a living off their passions rather than joining the rat race. It starts out as a Kevin Smith-y comedy but quickly takes a dark and unexpected turn that ultimately pays off.

Here's the thing about Crazy Joe Davola — he's actually scary! It's a "Seinfeld" episode, of course, so things never get too out of hand. But there is one scene in particular during which he menaces Elaine Benes that is genuinely unsettling. Of all the evil clowns on this list, he is the one who most closely resembles real-life creeps.

8. Billy the Puppet from the "Saw" series

Although Billy the Puppet isn't the actual villain in the "Saw" franchise, he has become the face of the series, and rightly so. In addition to having a look that is downright demonic, the puppet is also a link between the Jigsaw Killer's former life as a successful civil engineer and his latter mission to commit grotesque murders in the name of a Nietzschean worldview.

Make no mistake about it: "Spawn" is a terrible movie. Leguizamo's gleeful teeth-gnashing and scenery-chewing performance, however, makes it almost worth the watch. It's never easy to make a character simultaneously funny and creepy, but it must have been doubly hard to do that in a movie that unabashedly sucks as much as "Spawn."

This one belongs on the list because of the makeup work alone, which sears itself into your brain. The character himself is also plenty terrifying thanks to his grotesque obliviousness to the consequences of his actions (particularly on children). He also has a tragic backstory that helps you feel for him even as you root for his demise.

The fact that Noble has actually been a clown comes through in this film, which shows the audience the more annoying aspects of clowning life (i.e., bratty kids) before turning him into a memorable horror villain. While the movie itself aims for a somewhat campy tone, Stitches himself is plenty frightening.

I'm done concealing my admiration for Rob Zombie under the guise of guilty pleasure. The man is one of the best horror filmmakers out there today. Nowhere is this more evident than in his masterful writing of the depraved, perverted serial killer "Captain Spaulding." Try watching either of his films without being horrified, or at least appalled, by Haig's character.

A gem of a horror film that seems to languish in undeserved obscurity, "Clown" tells the story of a well-meaning suburban father who dresses up as a birthday clown after the entertainer booked for his son's party fails to show up. Considering that the suit slowly transforms him into a hideous monster, his family has grounds for a helluva lawsuit against the flaky jester!

2. Pennywise the Dancing Clown in "It" (Tim Curry)

When it comes to capturing the horror of Pennywise, Bill Skarsgard certainly has his work cut out for him. Curry's performance as Pennywise the Dancing Clown (in fact just one of many manifestations of an unnamed and malevolent alien) remains terrifying after nearly three decades.

1. The Joker in "The Dark Knight" (Heath Ledger)

He may not be a supernatural evil clown, but that doesn't make him any less terrifying. Indeed, part of what makes this iteration of The Joker such an effective baddie is the ideology he promotes. Beneath the decaying makeup and murderous schemes, there is a man with a profoundly nihilistic and anarchic social philosophy that's simply terrifying.