Blasts from the GOP past: Right-wingers dream of replacing Paul Ryan with Gingrich or Santorum

Wouldn't it be fun to drag these '90s dinosaurs out of storage? Could they lead conservatives back to glory? Um, no 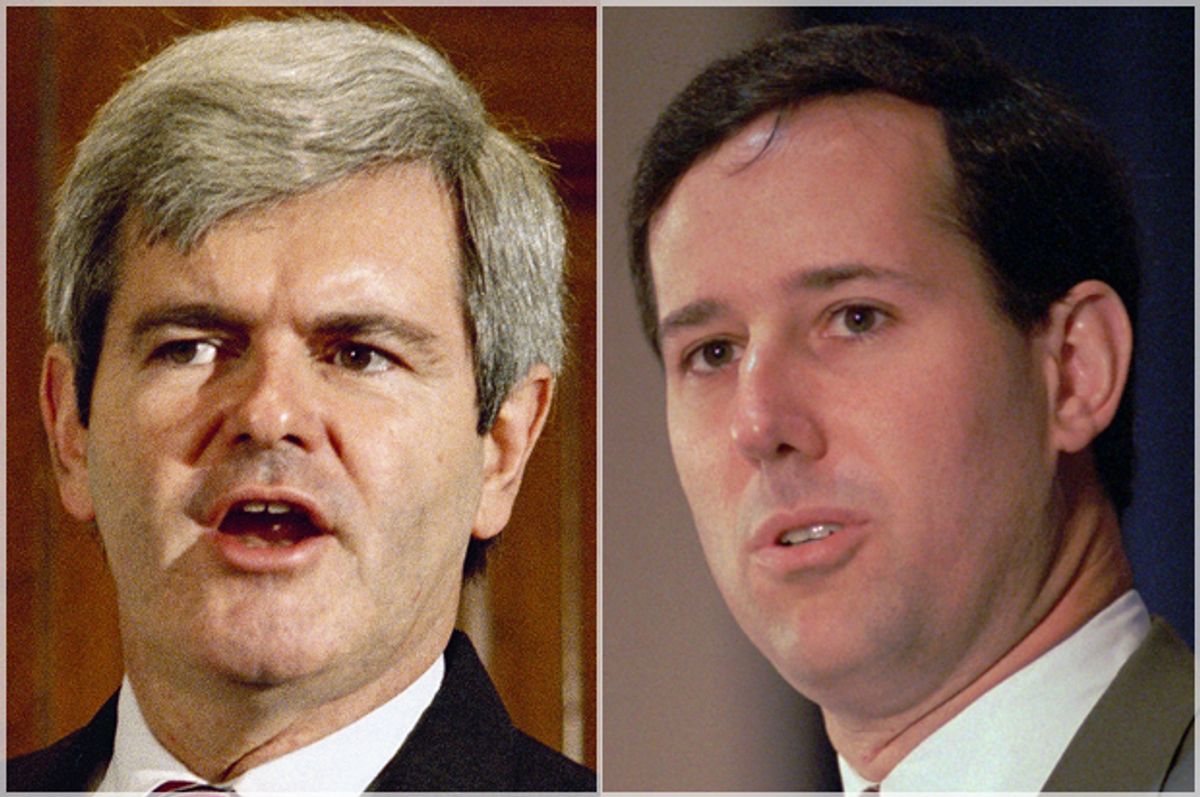 It's not enough that there's a historic Category 5 hurricane bearing down on Florida just a week after one hit Texas and brought biblical-level flooding. Apparently Congress and the White House have decided to stir up a maelstrom in Washington too, leaving every political observer in the country feeling even more disoriented than usual, and that's saying something. Donald Trump actually did some governing this week.

In the face of an unprecedented legislative pileup, with emergency disaster funding and the debt ceiling becoming political footballs, Trump made a deal with the Democrats to pass the funding and extend the debt ceiling for three months to get both some essential items off the table and create some breathing room for the rest of the agenda. Republican leaders meekly went along, even though they had just been humiliated by the president, because they knew the crazier members of their caucus were about to turn the Congress upside down with their usual nonsense and there just isn't room for that at the moment.

The only thing that ever matters to Trump is that he gets a "win" and that it produces good "coverage" and he got his wish. In fact he was so thrilled at what he saw on his TV on Thursday morning that he called up Nancy Pelosi and Chuck Schumer to bask in their shared glow and they got him to say that the debt ceiling hike should be permanent and tweet that DACA recipients are safe for the next six months. (That's actually not true; some of them will have to trust this government again and reapply by October or they will lose their status.) There was all kinds of talk about the new bipartisan "Kumbaya" throughout the media all day, apparently under the assumption that Paul Ryan and Mitch McConnell are now permanently out of service.

The one group that is disappointed about this cross-party love fest is the House Freedom Caucus, which was hoping to use the debt ceiling and disaster aid to stick it to some poor people. But those guys will get their chance soon enough. There's still a budget to pass, so maybe they'll get to do one of their favorite activities: a government shutdown. And Rep. Dave Brat, R-Va., the kingslayer who took down former GOP Young Gun Eric Cantor, pointed out that as upsetting as this was, everyone would be soothed by the passage of the holy grail: tax cuts.

What the right-wingers all agree upon is that Donald Trump is not at fault for any of it. The GOP leadership under Ryan and McConnell and a handful of RINOs failed him by not passing the Obamacare repeal and so he had no choice but to turn to the Democrats. Conservative talk show host Laura Ingraham said:

Time after time after time, Donald Trump trusted what was going on at Capitol Hill. They could not deliver a piece of legislation to his desk that actually could be signed. It wasn’t possible. So what does someone who’s a conservative populist do? When he wants to move the ball down the field? He’s gonna find, "OK, what other player can I throw to?" And the only one who’s on the field for him was gonna be Nancy Pelosi and Chuck Schumer.

Fox Business host Lou Dobbs admires Trump for putting Ryan and McConnell in their places and suggests that the big man has finally knocked some sense into them.

Yes, the right wing is applauding the president for cutting a deal with the hated Pelosi and Schumer because they hate the GOP leaders Ryan and McConnell even more than they hate Democrats. Did I mention that everything is getting even more disorienting than it already was?

Well get ready for this. The Freedom Caucus is now so upset with Ryan that they are openly suggesting overthrowing him as House speaker. Rep. Mark Meadows, the North Carolina Republican who heads the caucus, has some experience with this. He was involved in a failed attempt to dethrone former Speaker John Boehner, who ended up stepping down less than a year later. Meadows has apparently been strategizing with former Trump consigliere Steve Bannon in private meetings at the "Breitbart embassy" in Washington. You'll never guess who they are talking about installing in Ryan's place.

Robert Costa of the Washington Post had the scoop. Right-wingers are actually floating the idea of recruiting former House Speaker Newt Gingrich or former Pennsylvania Sen. Rick Santorum. (Fun fact: Anyone can be speaker of the House! The Constitution does not require that it be an elected member of Congress.) Costa writes that "the idea underscores [the Freedom Caucus'] desire to create trouble for GOP leaders if they believe their demands are not being addressed."

It also underscores how depleted the GOP bench is. Both Gingrich and Santorum are throwbacks to the halcyon days when the conservative movement was on the rise and the whole country was bathed in the golden glow of Saint Reagan. Gingrich, of course, originally sat on the same back bench the Freedom Caucus occupies today, where he helped remake the Republican Party into the aggressively destructive party we now have to deal with.

But why anyone would want him to repeat his tenure as speaker is a mystery. It was an unalloyed disaster. He arrogantly strode into the chamber and picked up the gavel in 1995, announcing a new era of conservative leadership, and was deposed four years later after having led Republicans into an ill-fated impeachment crusade against Bill Clinton and a nearly catastrophic loss in the 1998 midterms. If they are looking for someone to fail miserably at being speaker, Gingrich certainly has the experience required for the job.

Rick Santorum represents a different faction of the old guard conservative movement: the hardcore Christian right. During their heyday, this group was extremely important and Santorum was one of their warriors. He had an undistinguished career serving for four years in the House and two terms as a Pennsylvania senator until he was turned out of office in the Democratic wave election of 2006. Since then he seems to have made a career of unsuccessfully running for president. Unfortunately for him, Santorum is best known for being against birth control because it allows people to have sex for pleasure  and having his name turned into an obscene neologism. Again, if he is the best they can come up with to lead the House of Representatives, it says a lot about the poor state of the GOP.

It's unlikely that these far right hardliners will be any more successful at enacting their agenda than they ever have been, even with Trump in the White House eager for any "win" he can get. But according to Costa, Bannon's decision to join forces with them is largely about seeking to cast the blame for all these failures among the faithful on Paul Ryan and Mitch McConnell and away from the president.

It's early days, but if this week is any example, Bannon's latest scheme actually has a chance of success.