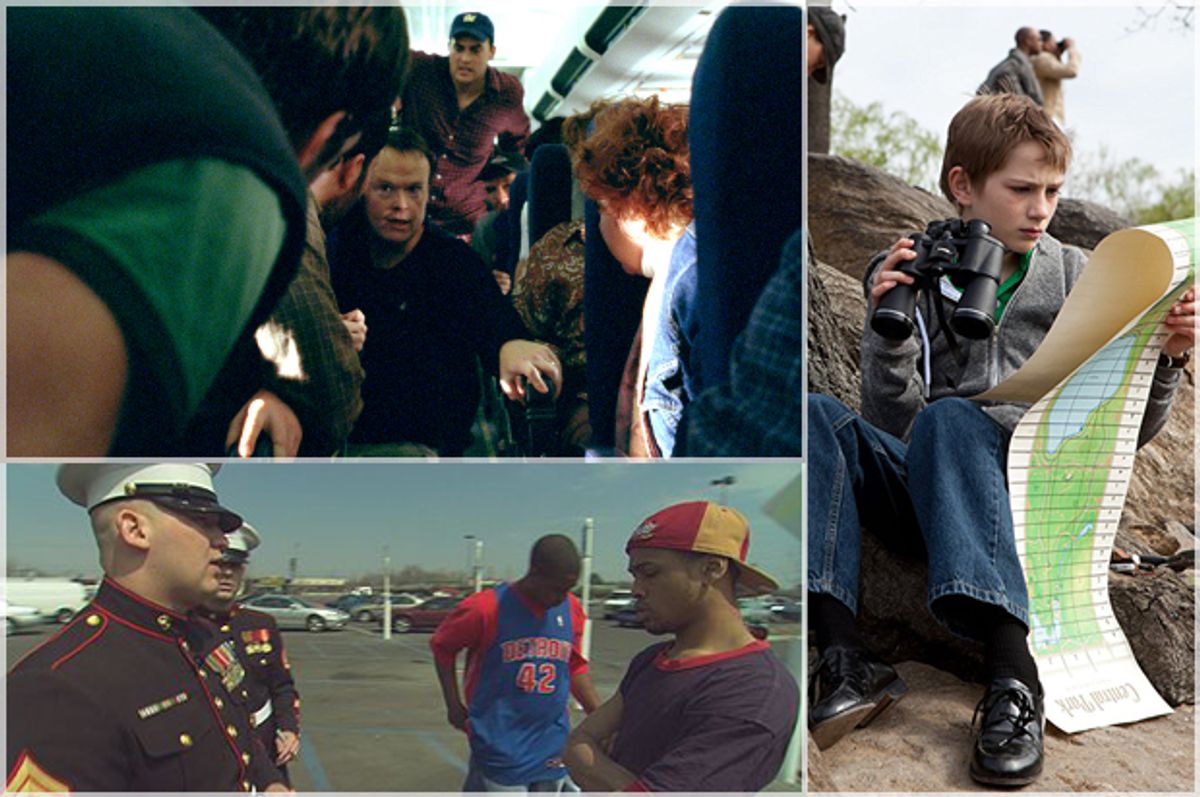 None of us who lived through it will ever forget the September 11 attacks, nor the nearly 3,000 lives that were lost that day and the countless others affected by that loss. Our nation, and its foreign policy, are still only just absorbing it all.

As artists do, filmmakers have explored the tragedy — the fallen, the heroes, the survivors, the aftermath — various forms including Big-screen adaptations of plays, international collections of shorts, chick flicks, documentaries, docudramas, and more have focused on 9/11. Many of theses films artfully depict how people coped with the disaster, but they also prompt the audience to consider how they would react in the situations the characters find themselves in.

Here are 10 films, many of them worthwhile, that revolve around the 9/11 tragedy.

1. “United 93” (2006)
Paul Greengrass’ riveting docudrama gives a behind-the-scenes look at the air-traffic controllers as well as the military officials involved in the surprising events that unfolded that day, putting viewers in the middle of the action. The film opens with engaging scenes of the flight being prepared for departure, but once the plane takes off, the situation becomes absolutely unnerving. Audiences will find themselves asking how they would cope and react in the same, desperate situation. The film is unbelievably tense, the acting is uniformly strong and the cinematography is unparalleled.

2. “The Guys” (2002)
This sincere, heartfelt drama, based on Anne Nelson’s play has Nick (Anthony LaPaglia), a fire captain who lost eight of his men on September 11th, enlisting the help of Joan (Sigourney Weaver), a journalist, to help him write eulogies for four of his guys. As Nick and Joan talk, she listens and takes notes about each fireman’s heroic qualities. There is the father figure, the probie (rookie) whose first big fire was 9/11, the role model and the joker. “The Guys” is a bit stagey, but when director/co-writer Jim Simpson breaks with the dialogue to have Joan pay a visit to an Engine station to pay her respects, the scene is incredibly moving. Likewise, when Weaver and LaPaglia read two eulogies in the film’s second act, it is difficult not to cry. Weaver is solid, but LaPaglia’s subdued performance here is tremendous; he truly captures the weight of Nick’s emotions, and he is emotionally devastating. So too is the film.

3. “WTC View” (2005)
Writer/director Brian Sloan’s poignant film (based on his play) follows Eric (Michael Urie), a gay guy who places an ad for a roommate on September 10. While his apartment below 14th street has lost its view, Eric tries — with increasingly less success — to use gallows humor to cope with his survivor’s guilt. His uncertainty has him concerned about air quality, sirens and even a shirt he purchased shortly before the 9/11 attack. As various people enter the apartment, Eric rants and unravels. The impact of multiple traumas and his overall anxiety take a toll on him far greater than he realizes. Urie is fantastic, especially as Eric’s mantra, “I’m fine,” becomes less and less convincing every time he repeats it. Sloan effectively uses a timeline of images and headlines between episodes to contextualize the emotional and economic repercussions of the tragedy writ large, as mirrored in the crucible of Eric’s two-bedroom apartment.

4. “September 11” (2002)
This anthology of 11 international films gave directors the complete freedom of expression to make an 11-minute, 9-second short about the 9/11 tragedy. The collection is a mixed bag, with arguably the best being Alejandro González Iñárritu’s entry in which a black screen, filled with voices chattering in various languages, is interrupted periodically with images of bodies jumping/falling from the towers. His film raises a question at the end that will prompt discussion. Other segments range from shrewd — Amos Gitaï’s Israeli film has a newscaster trying to report on a bombing in Israel when the 9/11 attacks happen — to precious: Youssef Chahine depicts the filmmaker talking with the ghost of a fallen marine. Mira Nair’s powerful segment, based on a true story, concerns a mother’s missing son who is suspected of terrorism. Other shorts are allegorical (Shohei Imamura’s story of a Japanese soldier), preachy (Ken Loach’s UK entry has a Chilean ex-pat describing the events of 9/11/73) and downright awful: Sean Penn’s bizarre story of a man (Ernest Borgnine) coping with the loss of his wife, when the tragedy occurs. All, however, are honest.

5. “Sorry, Haters” (2005)
This extremely provocative film set in post-9/11 New York City has Philly (Robin Wright Penn) befriending Syrian Ashade (Abdellatif Kechiche) in his cab. She offers to help Ashade get his brother out of Guantanamo, where he is being detained. However, this plan sets a series of nasty events in motion. As “Sorry, Haters” unfolds, Philly is seen committing various “acts of retribution” for 9/11, embodying the rage she has and feels Ashade should have. Writer/director Jeff Stanzler may be giving voice to the powerless, but what transpires is extremely potent and disturbing. Wright gives an astonishing performance, playing a complex character whose blunt talk is matched by her actions. “Sorry, Haters” will frustrate some viewers, but it is absolutely fascinating, and at times, unforgettable.

6. “Extremely Loud and Incredibly Close” (2011)
A heartbreaking story about coping with trauma, Stephen Daldry’s adaptation of Jonathan Safran Foer’s novel is a life-affirming tearjerker. Oskar (Thomas Horn) is a 9-year-old boy in New York City who has a close bond to his father Thomas (Tom Hanks). A year after Thomas dies on 9/11, Oskar finds a key and sets off to find the lock it belongs to. He hopes to extend his relationship with his dad and “make sense” of his untimely death. Daldry makes the sights, sounds and emotions of Oskar’s journey palpable as he learns life lessons about love and death, fear and courage, as well as finding closure and letting go.

7. “September Morning” (2017)
This compelling indie film, now out in theaters and on VOD, has five college freshmen holed up in a dorm room grappling with the after effects of the terrorist attacks. Turning off the TV, these teens distract themselves by opening beers, smoking cigarettes and bonding as they talk (and talk, and talk) about their lives, sexual experiences, thoughts and memories. They also discuss free will, faith, and what the world is going to be like, framed by 9/11. “September Morning” may feel like a topical twist on “The Breakfast Club,” but writer/director Ryan Frost gives his characters some situational gravitas: Dish (Patrick Cage II), who is in the ROTC, flaunts the authority of his RA, while Eric (Troy Doherty) is waiting to hear from his brother, who was in New York City at the time of the attacks. If the film doesn’t jerk tears, it's because it's designed to initiate a conversation about how youth cope with trauma, which is both admirable and necessary.

8. “Fahrenheit 9/11” (2004)
Michael Moore’s incendiary 2004 documentary opens with the sounds of the 9/11 tragedy, followed by reaction shots of folks on the ground. Moore then provides footage of President George W. Bush while the nation was under attack reading “My Pet Goat” to schoolchildren in Florida. How President Bush reacts to the 9/11 attacks forms the basis for much of this sardonic film. The filmmaker uncovers money and oil links between the Bush and bin Laden families, as well as the gains corporations including the Carlyle Group and Halliburton received because of 9/11. Moore also chronicles personal stories, from cases of suspected terrorism and xenophobia in small towns to repercussions from the 2001 Patriot Act, and accounts of families who lost loved ones in the Iraq war that occurred as a result of 9/11. “Fahrenheit 9/11” is certainly pointed, but it makes some important points.

9. “World Trade Center” (2006)
An emotional and involving melodrama, centering on the families of two policemen who went to do their duty during the 9/11 tragedy and almost lost their lives, Oliver Stone’s film — subdued by his standards — captures the humanity of John McLoughlin (Nicolas Cage) and Will Jimeno (Michael Peña) as they lie trapped under the rubble for hours. Yet it’s the quiet fortitude of the men’s wives (Maria Bello and Maggie Gyllenhaal) that really conveys the emotional response of that fateful day. Grappling with the thoughts of losing their husbands — and their children’s fathers — viewers will root for these steely, determined women as much as they do for John and Will.