Interior Department's ideas for national monuments are leaked: A massive capitulation to oil and gas interests 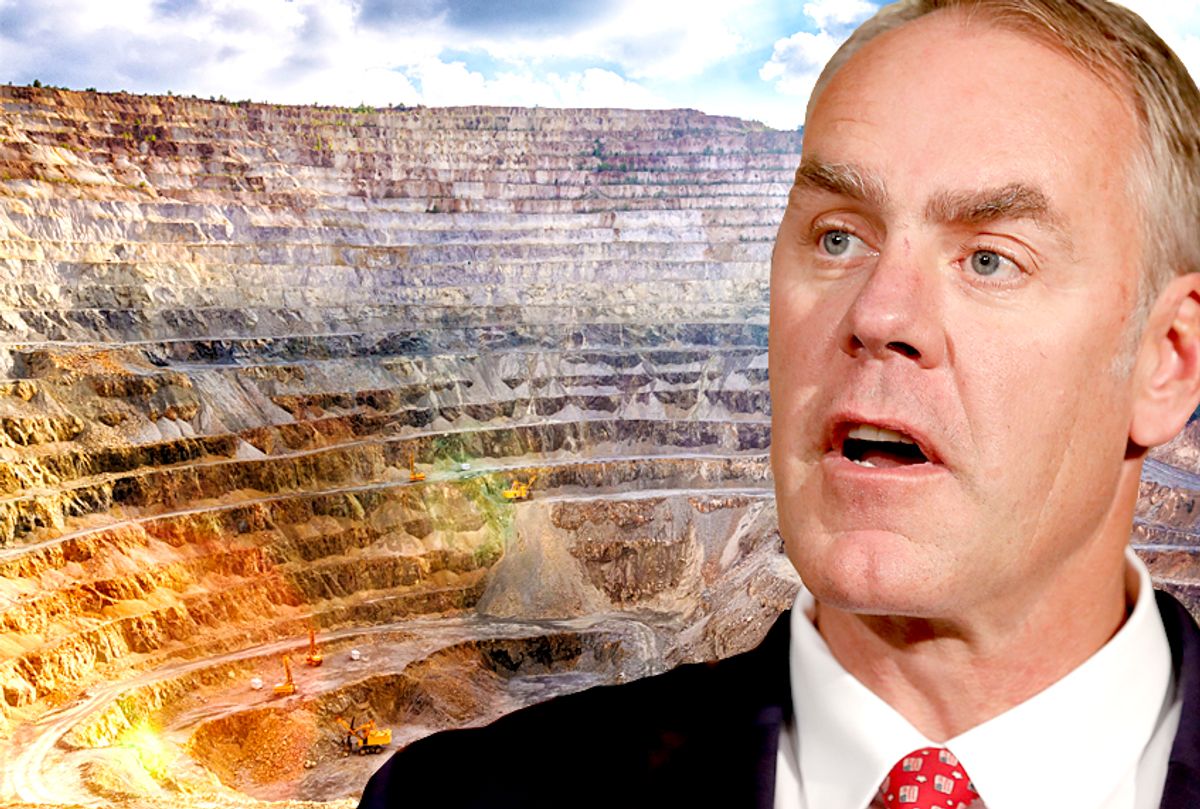 In April, Donald Trump released an executive order calling on Interior Secretary Ryan Zinke to review the national monument designations ordered by various presidents over the past two decades, to determine if those decisions were "made without adequate public outreach and coordination with relevant stakeholders." On Sunday, The Washington Post leaked the memo that Zinke wrote, post-review, to the White House, which the administration has so far declined to release.

Reading the draft memo, what quickly becomes clear is that the only people Zinke considers "relevant stakeholders" when it comes to national monuments are various extraction industries, from timber to oil and gas to commercial fishing. Local residents, Native American tribes, businesses that rely on the tourism industry, environmentalists and future generations of Americans can all go jump in a polluted lake.

"It confirmed our suspicions that this will be the largest rollback of protections for public lands in American history," said Kate Kelly, the director of the public lands program at the Center for American Progress. "The sheer scale and scope of these recommendations is unprecedented.”

Zinke's recommendations basically boil down to two agenda items: Make it much easier for extraction industries to lease land and water rights in national monuments and drastically reduce the size of four western monuments, which would also grease the wheels for extraction leases. Yes, Zinke includes other recommendations, including improving infrastructure in monuments and even potentially considering the designation of new monuments, but environmentalists who spoke to Salon largely saw that as window dressing to distract from the giveaway to mining, drilling, lumber and fishing industries.

“These are lands and waters that belong to all of us, and we’ve entrusted them to both President Trump and Secretary Zinke to act as stewards for us," said Sharon Buccino, director of the land and wildlife program at the National Resource Defense Council. Instead, "the priority that this administration has placed on them is to be used for the profit of a few."

Zinke's memo leans heavily on doublespeak, portraying wealthy extraction interests as hapless victims and environmentalist groups as their oppressors. Providing no evidence, Zinke argues that local stakeholders side with the mining and logging industries but are unable to be heard because they "lack the organization, funding and institutional support to compete with well-funded" environmental groups.

The idea that ordinary Americans, along with drilling and mining interests, are quivering in fear as all-powerful environmentalists stomp all over their rights does not square with the fact that during the public comment period on the national monument question, more than 2.5 million comments were registered with the department, and of those that had been analyzed, nearly all supported leaving the monuments alone.

Zinke briefly acknowledges this fact, but dismisses it by attributing the comments to "a well-orchestrated national campaign organized by multiple organizations."

But while the opinions of environmental groups and the millions of Americans who support them are dismissed as special interests, the opinions of extraction industry lobbyists are taken very, very seriously by Zinke and his team.

"The public's view," said Dan Hartinger, deputy director of parks and public lands defense at the Wilderness Society, "doesn’t seem to matter to them as much as people who seek to turn profit from public lands."

"It’s important to look at who’s making these decisions behind the scenes," Kelly said. "In the case of the Interior Department, the Council on Environmental Quality and the White House, there are former oil and gas execs and lobbyists scattered throughout.”

This has been amply demonstrated by the Department of Influence website set up by the Western Values Project, which outlines how Zinke has staffed the Interior Department with people whose principal careers have been associated with oil, gas and other extractive industries. His deputy secretary, David Bernhardt, is a long-time oil and chemical lobbyist. His special assistant, Kathy Benedetto, was a mining lobbyist who wanted to destroy the Endangered Species Act.

Aaron Weiss, media director for the Center for Western Priorities, described Zinke's memo as reading "like an eighth-grade history report written by someone who realized on a Wednesday that they had a report due the next morning," composed mainly of "broad platitudes that made it clear that Secretary Zinke thinks our national monuments are for drilling and mining."

The relative lack of detail likely reflects the fact that this four-month review process was a farce and that Zinke's recommendations to shrink monument size and open up lands for extraction was a foreordained conclusion.

“It’s an echo chamber that they’re building for themselves to get the answers they want," Hartinger said of the Interior Department's process.

Chase Huntley, energy and climate program director for the Wilderness Society, concurred, noting that "sectors like recreation and tourism" were largely ignored during the review process, even though "local economies that are benefiting from those sectors that have the most to lose."

Buccino singled out the situation in Utah as "the clearest example" of this tension. When Zinke visited Utah during his review process, he met with a number of opponents of the monuments and was led on a tour of Bears Ears National Monument by Rep. Rob Bishop, R-Utah, a noted monument critic, and Koch brothers-funded operative Matt Anderson. He did not, however, meet with the Escalante and Boulder Chamber of Commerce, who requested an opportunity to discuss the economic benefits to the community caused by increased tourism to national monuments.

"As we emphasized in our public comments, shrinking the size of Grand Staircase-Escalante National Monument will hurt our businesses and destroy what our community has built over two decades," the chamber wrote in an August letter to Zinke's office.

It's not just mom-and-pop stores that can't compete with the lobbying weight of the oil and gas industries who are likely to suffer economically, either.

"Taxpayers get ripped off with every [oil and gas] lease," Weiss said, citing the fact that many companies only pay $2 an acre per lease. Just this month, for instance, the federal government leased out more than 4,000 acres of land that happen to be the habitat for the imperiled greater sage grouse. The government received less than $15,000 for that lease. The fear is that similar things will happen to national monument land: They will be damaged by extraction industries, and taxpayers won't even realize significant money from the exploitation of land and minerals that are supposed to belong to them.

“At the end of the day, this entire memo is an attack on America’s outdoor heritage," Weiss concluded.

The White House does not have to act on these recommendations, to be clear. They could, as Kelly recommended, "put these recommendations in the trash." Unfortunately, Trump's short tenure in office has been marked by remarkable hostility toward conservation and environmentalism, so there's every reason to fear his administration will take the ax to the natural history and American heritage these monuments represent.