"Sunday Night Football" ratings were down, but Trump can't take the credit

Sure, viewership was down Sunday night, but it's not just about the protests 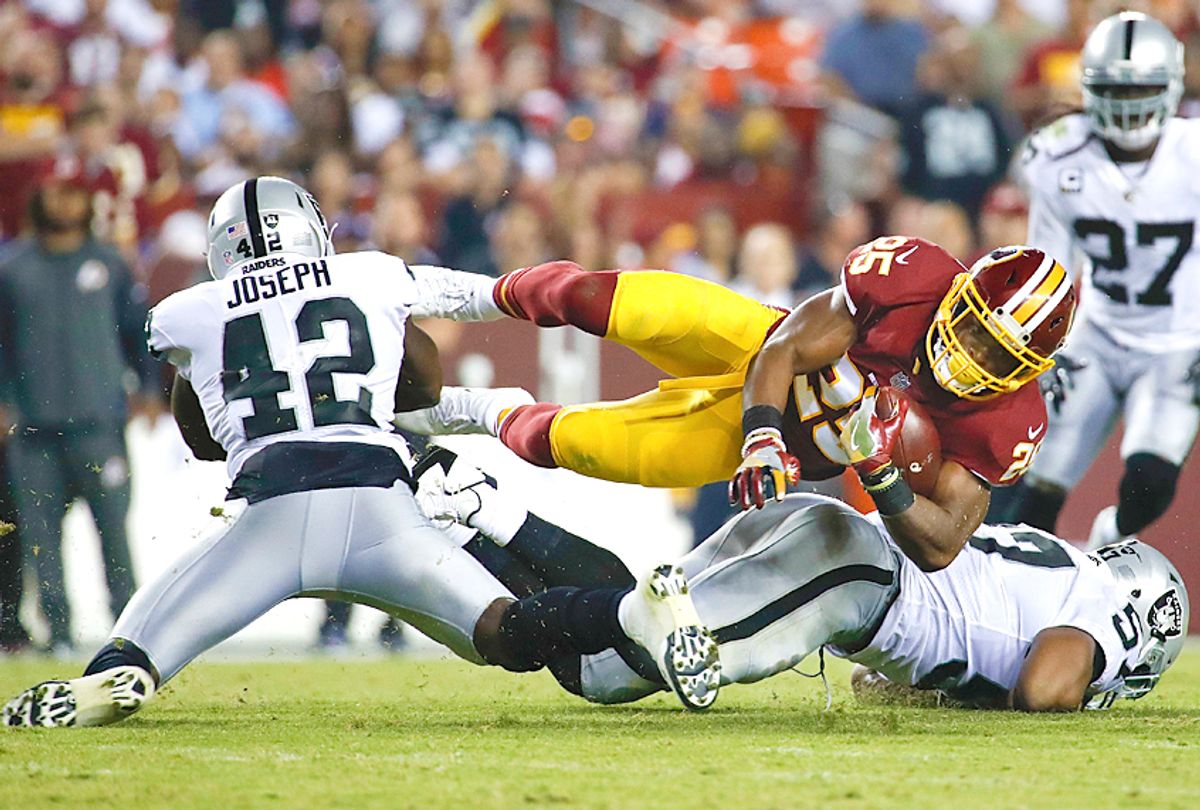 This weekend, President Donald Trump implored his Twitter followers to boycott the NFL games on Sunday due to his opposition to many players taking a knee during the national anthem in a protest against police brutality and racial injustice. Indeed, some are saying that his call to action worked, after reports revealed that NBC's "Sunday Night Football" broadcast night game saw a significant drop in ratings compared to its week three game in 2016.

The game, between Oakland and Washington, drew a 11.6 overnight rating — down about 10 percent from week three last year when the Chicago Bears played the Dallas Cowboys.

Right-wing commentators were quick to attribute the decline in viewers to a mix of Trump's statements and the overall issue of protests:

NFL ratings were down 10 percent for the Sunday night game. I'm sure the NFL leadership will continue to pretend everything is okay.

.@KevinJacksonTBS on NFL ratings: "The decline was going to happen... [@POTUS'] putting more of a spotlight on it is going to make it worse" pic.twitter.com/RL05wGHBIX — FOX Business (@FoxBusiness) September 25, 2017

While there is concrete evidence that football fans are not watching games at home on their TVs as much as they used to, it is less evident that the protests are responsible for the ratings drop.

Generally speaking, the NFL had been suffering from a ratings decline long before former-49ers quarterback Colin Kaepernick took a knee last season. As much as we hate to cite the smarmy/sociopathic ESPN business-and-media pundit Darren Rovell, his Twitter post tells the whole story.

Overnight ratings for National NFL games on CBS for Week 3:

But, yes, there is an overall downward trend, one that is more likely a function of changing viewing habits than it is a boycott over players protesting during the national anthem. As well, we should take into account that this year's Sunday-night matchup of the flagging Washington squad and the ascendant, but bound-for-Las Vegas Raiders was nowhere near as marketable as last year's game with the then-surging Dallas Cowboys, America's most popular team.

Beyond the game itself, the weather could also have been a factor Sunday night. Cities across the country saw record highs in temperature, as the East Coast, Midwest and West Coast were in the mid-to-high 80s and 90s, giving many a last, late shot at enjoying summer.

Certainly, an exodus by those displeased that players have been taking a knee during pre-game playing of the national anthem may have had some effect. Just listen to this tearful viewer. But it is far more likely that whatever Trump attempted to spur did not play a major factor in last night's incremental, predicable ratings drop. When it comes to Nielsen numbers, the NFL has a far larger problem than protests: Americans' changing viewing habits.