Oprah sat down with 7 Trump voters and 7 non-Trump voters, and people have opinions

In her "60 Minutes" segment, Winfrey was unable to heal our divided nation, or even get Trumpsters to talk sense 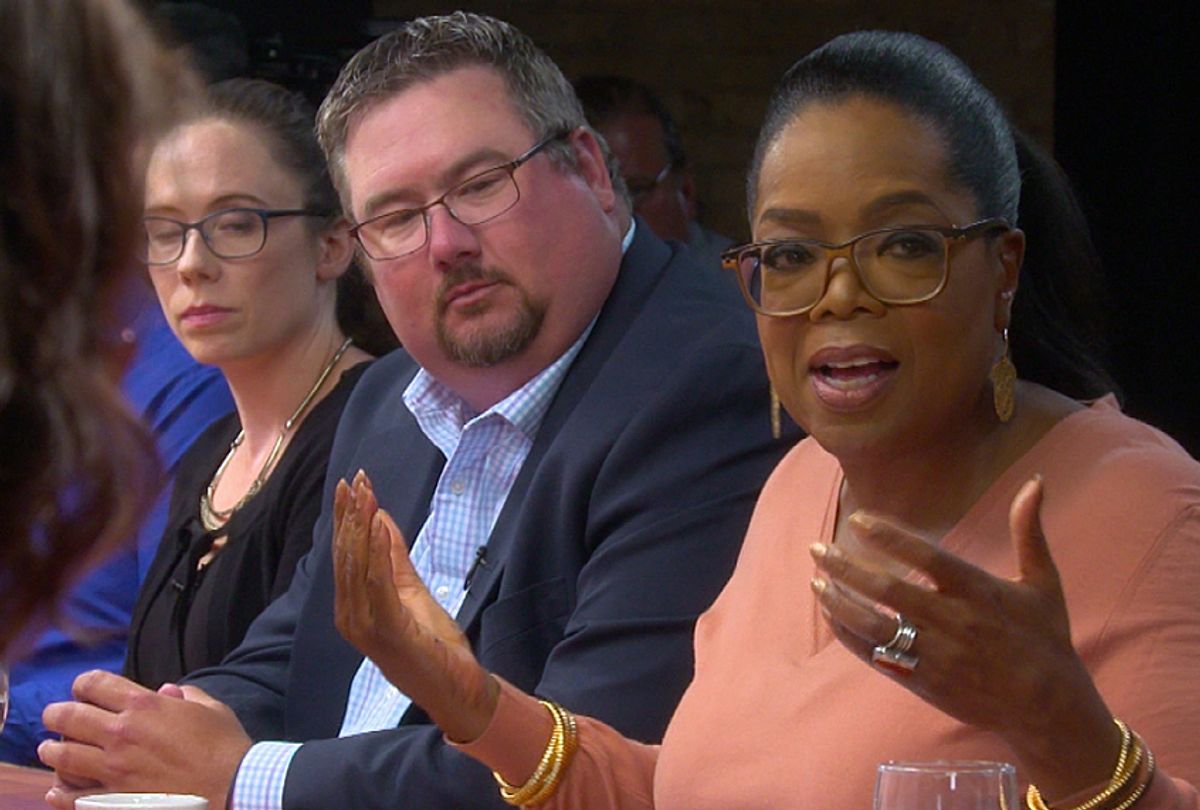 There's no question that Donald Trump brought huge divisions to the United States. The divide is so big, in fact, that not even media goddess Oprah Winfrey can save us.

On Sunday, Oprah Winfrey debuted as special correspondent to "60 Minutes." There, she sat down with seven people each on the opposite side of the Trump/sanity divide. Winfrey posed questions to the group concerning their current feelings about Trump, his response to Charlottesville, assumptions about Trump voters and discussions of voting on or against party lines.

Most Trump supporters, no surprise here, doubled down. Detractors, naturally, stayed their courses as well.

When asked how Donald Trump is doing as president, answers range from “every day I love him more and more” to “he’s a horrible president.” pic.twitter.com/UzY6tRGIJP

A lifelong republican claimed she eventually didn't cast her ballot for the Republican contender after being shamed by her entire Trump-voting family.

Jennifer, a lifelong republican who didn’t vote for candidate Trump, says she was “persecuted” for it by her family. #60Minutes pic.twitter.com/AdMTY0qpQG — 60 Minutes (@60Minutes) September 25, 2017

Many of the president's supporters didn't feel that his speech in which he said that there were bad actors"on both sides" of last month's deadly Charlottesville rallies and riots drew a moral equivalency between anti-fascists and the "alt-right." Indeed, one Trumpster blamed the media for building that narrative.

Did the president draw a moral equivalence between the groups that protested in Charlottesville? These voters are divided pic.twitter.com/UvSwkEaVfF

Winfrey tried to shed some light on any preconceived notions that detractors had about Trump supporters and how Trump voters view themselves.

The response to the interview on Twitter was swift and not as universally complimentary as perhaps CBS would have hoped.

#60Minutes Oprah started by setting a bad tone. The division in this country did NOT just start w/the 2016 election (or campaign). Not true!

The issue with Trump supporters is that I DO understand them, and I HAVE listened to what they have to say. None of it redeemable #60Minutes — Blake Harllee (@b_harllee) September 25, 2017

Come on @Oprah follow thru with questions to these people. Mention the 7 years of time to come up with solutions to Obamacare. #60Minutes

I just watched Oprah's segment on 60 Minutes & y'all really have to stop putting oppressed ppl in rooms to hash it out with racists.

Oh dear. If Oprah can't save us from the divide, who can?