With just a few words written on her hand, anthem singer Jordin Sparks made the NFL's unity party look pathetic 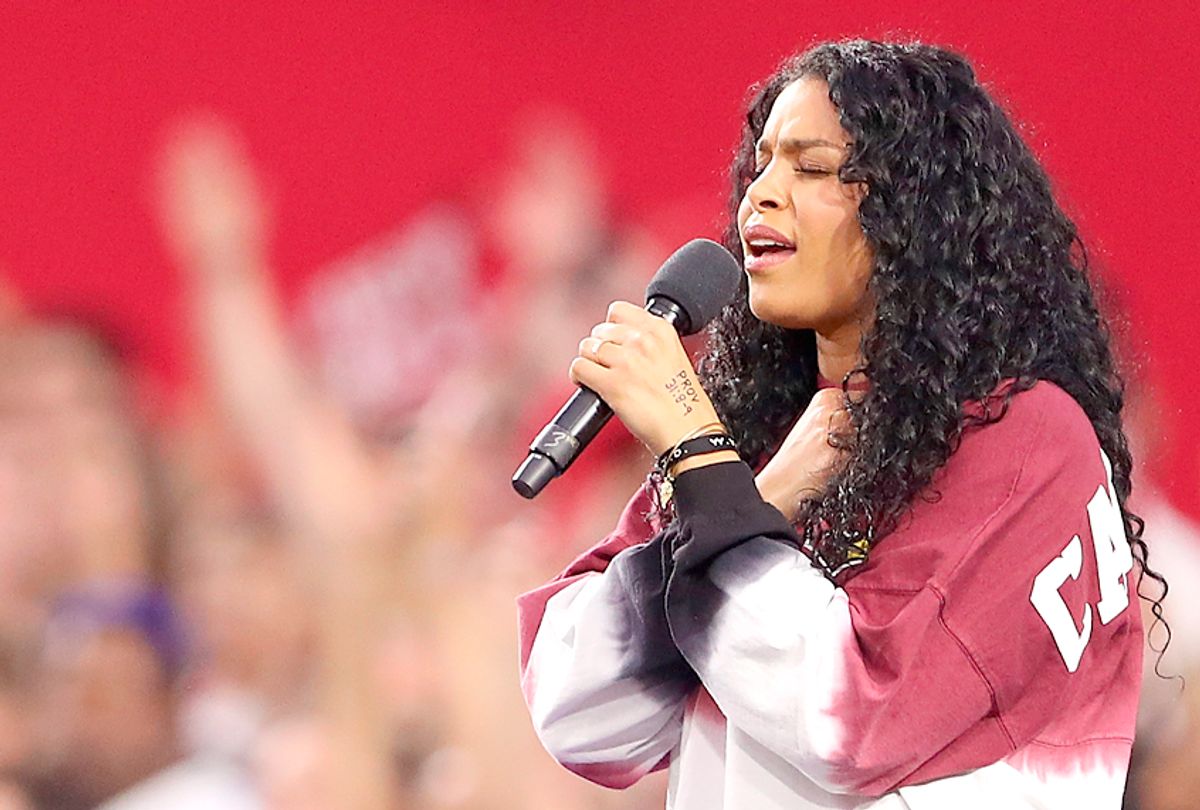 The NFL and its de facto leader Jerry Jones attempted to co-opt the ongoing national anthem protests before the Cowboys vs. Cardinals game (and before the anthem) on ESPN's "Monday Night Football" from Glendale, Arizona. With players kneeling midfield during a moment of silence or police officers holding aloft a gargantuan American, it was a craven (and somewhat effective) bid to turn what Colin Kaepernick started as a comment on the the plight of black Americans into a homogenized tribute to "unity." It was terrible.

What wasn't, however, was the moment provided by the singer of last night's anthem, R&B star Jordin Sparks. Without actually saying a word — outside of the lyrics of the anthem itself — she was able to make Jones and both the Cowboys and the Cardinals on field appear even more disingenuous and out of touch than they already did.

Simply, the former "American Idol" star had written on her hand the biblical citation "PROV 31:8-9" (that is, Proverbs 31:8-9), a nice move given that any closeup of her would have made the book, chapter and verse visible to the home audience.

Ok, @JordinSparks, I see u sis.
“Open your mouth for the mute, for the rights of all who are destitute”
- Prov. 31:8 pic.twitter.com/F2dTybQCfM

As the Root points out, Proverbs 31:8-9 reads: "Speak up for those who cannot speak for themselves, for the rights of all who are destitute. Speak up and judge fairly; defend the rights of the poor and needy." It's a bit of Old Testament Scripture that points back to the original and necessary reason Kaepernick took a knee in the first place and stands in stunning opposition to the Hotel 8 continental breakfast of white centering the NFL trotted out just moments before. As the Root noted, Sparks' keen use of the book so many conservatives seem to forget when it benefits them did not go without notice or praise.

Jordin Sparks is like, "I dare y'all to argue with the Lawd." pic.twitter.com/3CLGalwkeG

Jordin Sparks dropping that Biblical shade on Trump & those upset over #TakeAKnee pic.twitter.com/ECZRLiHV1E

Per my mother, Jordin Sparks was bringing the biblical heat to critique Trump pic.twitter.com/XYwTHrYeWZ

The Bible verse Jordin Sparks has on her hand, while singing the national anthem. #blessup pic.twitter.com/kKIFZfCPwE