The case of the passionless plot: "Law & Order True Crime: The Menendez Murders"

Dick Wolf's tried and true "just the facts" formula does not fit all genres. 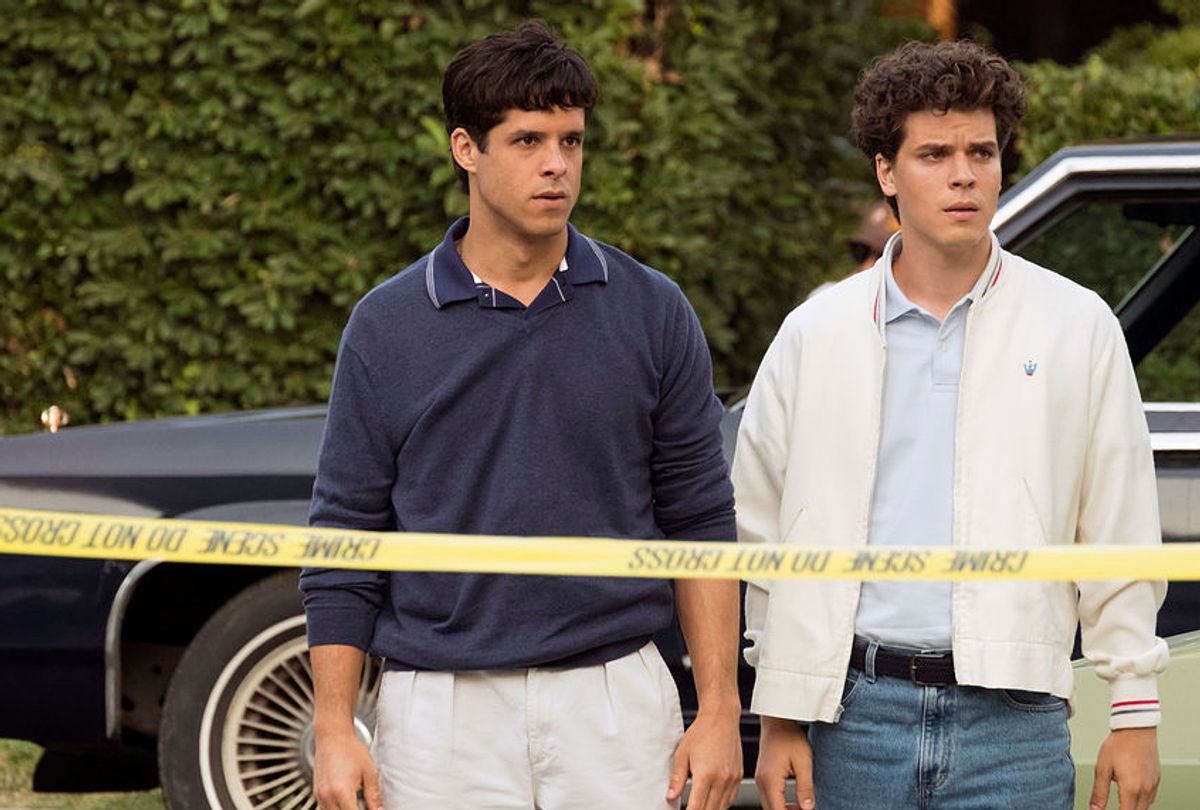 Classics are classics for a reason, and sometimes there’s no substituting for or improving upon them. “Law & Order True Crime: The Menendez Murders” proves the accuracy of each side of this statement in ways obvious to people familiar with Dick Wolf’s franchise and the famous double-homicide it profiles.

Spooling out over eight episodes starting Tuesday at 10p.m. on NBC, the limited series enables Wolf to adapt the famous investigation and subsequent murder trial of Lyle and Erik Menendez to this tried and true brand. Everything you know about “Law and Order” shows up in its true crime cousin, from the cool and detached scripting to that signature “boom-gung-gung.”

A murder case is a murder case, after all — except, that is, when the case in question is somewhat analogous to another celebrity murder already dramatized to wide critical and industry acclaim. The Menendez brothers weren’t movie stars or famous football heroes, and their case pre-dated the O.J. Simpson murder trial. But they were spoiled rich kids who came to symbolize privilege and the runaway excess of the late 1980s, making them prime fodder for cable’s Court TV to sensationalize.

And there’s the rub, because the nature of Wolf’s approach thwarts sensationalism to emphasize the logistics of a case.

“Law & Order True Crime” takes us back to late 1989 and 1990, when Lyle (Miles Gaston Villanueva) and Erik (Gus Halper) Menendez murdered their parents José and Kitty (Carlos Gómez and Lolita Davidovich) and managed to remain free for months afterward owing a reflexive tendency in the police department to overlook the potential culpability of a person based on their wealth and social status.

Grisly as their actions were, the Menendez brothers reside in the memory as tabloid figures, tacky entitled creeps who embarked on a shopping spree days after they gunned down their mother and father at close range.  Such a detail speaks volumes about their icy lack of remorse and guile while also begging for a hint of pulp. There's a reason this case has already inspired two TV movies, including one that aired this summer on Lifetime and starring Courtney Love (!) as Kitty.

But showrunner Rene Balcer, who previously drew inspiration from the Menendez murders to write a 1991 “Law & Order” episode, steers his writers to take the same dry approach here as he did sixteen years ago, walking us through the particulars of the tale with all the spark of a burned out docent on her last museum tour of the day.

An array usual style suspects place the action, including the requisite pastel polo shirts, boxy cars and an impressive wig game led by a stack of wild, hay-colored coils topping Edie Falco’s dome. Falco’s impression of defense attorney Leslie Abramson is as on point as you’d expect it to be, and she summons enough of Abramson’s vivid personality to enliven her scenes and draw the viewer’s focus. And you’ll appreciate that once you get past asking whether Falco is wearing that permed hairpiece or if it’s wearing her.

Aesthetics are probably the best aspect of “Law & Order True Crime” and the least of its stumbling blocks. Of broader concern is the paucity of splash and vitality in the first two episodes of the miniseries.  “Law & Order” adopts an intentionally low passion, “just-the-facts-ma’am” approach to its mysteries in an effort to make its ripped-from-the-headlines cases feel timeless. That method allowed Wolf's police drama to last for 20 years.

(Its spinoff “Special Victims Unit,” in contrast, intentionally spotlights the personality of its detectives and has lasted almost as long as its progenitor. I’d even posit that it informs the modern approach to broadcast procedurals much more these days than the original.)

But “Law & Order” also neatly wraps up the majority of its investigations and trials within the space of one episode. Expanding “The Menendez Murders” over eight installments means placing personality to front and center, which it does when it explores the moneyed social circles of Beverly Hills. But save for Falco’s Abramson and Josh Charles’ portrayal of Erik’s therapist Dr. Jerome Oziel, the players aren’t given much room to make a significant impression within the two episodes provided for review.

In a subgenre defined by the comparatively bold “The People v. O.J. Simpson: American Crime Story,” this simply doesn't fly. Dynamic performances and writing that flirts with camp serve to augment that series' narrative, though the series still found a way to lead with dialogues regarding the justice system's socioeconomic bias.

Wolf and Balcer may very well step into that field in later episodes given the conspicuous parallels to the Simpson case and modern debates; the Menendez case also contains allegories about race and class, and there's possible material to be explored in terms of relative difference in treatment the Menendez brothers may have received as scions of the nouveau riche, illustrating another level of favoritism enjoyed by establishment money.

Regardless of whether this happens, we’ll never know if “Law & Order True Crime” would have made a more positive impression “American Crime Story” hadn’t already set such a high bar. Heck, who knows if Wolf would have even thought to apply the “Law & Order” formula to any real crime without the success of the FX series — or Netflix’s “Making a Murderer” and HBO “The Jinx” besides?

Never mind such “what ifs,” because what matters is the situation as it stands: “Law & Order True Crime” moves through its paces with color-by-numbers economy, a strange observation to make about a homicide case that began with a series of shotgun blasts inside of an ostentatious mansion.