The president just discovered the U.S. territory is an island in the middle of the Atlantic Ocean 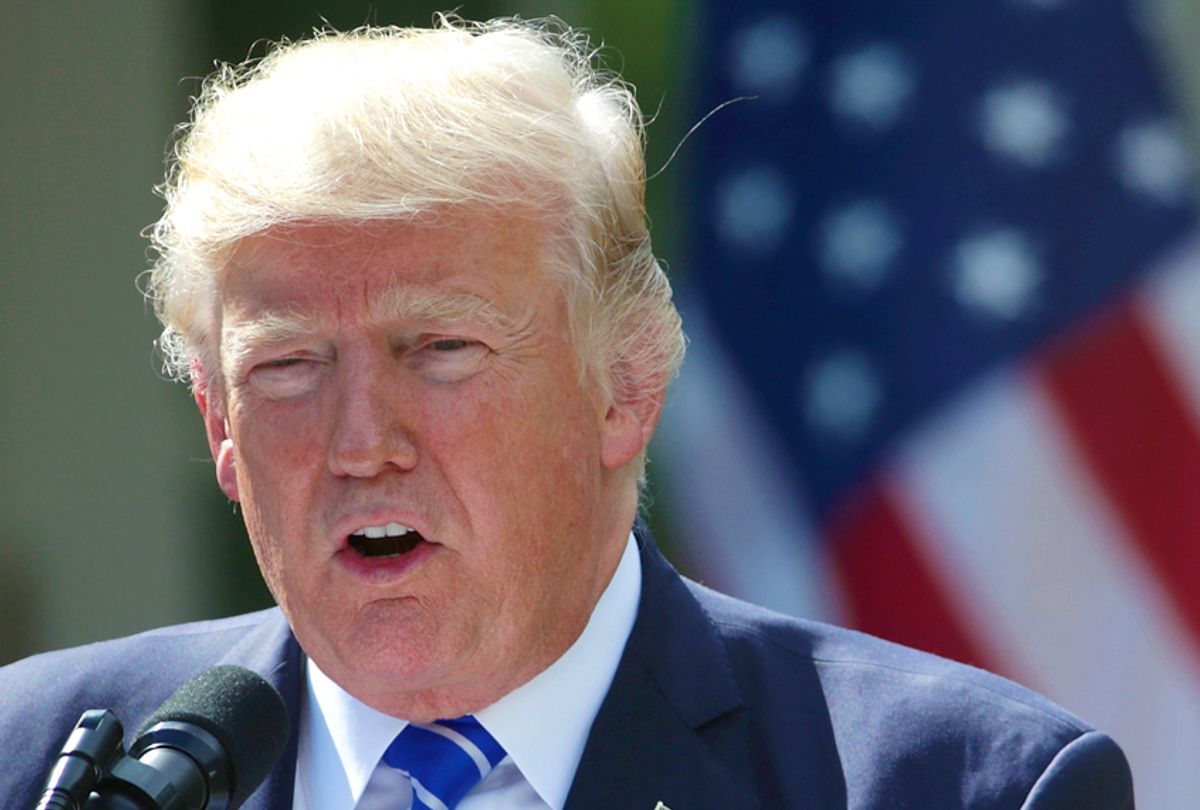 Rather than plot out a recovery plan for hurricane-devastated Puerto Rico, the president spent the past weekend engaged in Twitter wars with professional athletes over their right to freedom of expression. Better late than never, Trump spent Monday and Tuesday talking about Puerto Rico, making the rounds in interviews and a Rose Garden news conference. Yet Trump’s statements on the recovery effort have been unorthodox (to say the least) and repetitive (as usual). Here's what Trump has had to say:

Officials are kissing Trump's feet as he does a "tremendous" job

Despite reports of desperation on the island, Trump spent a great portion of Tuesday's news conference tooting his own horn — as he so often does. “We’re doing a very good job,” Trump said in some form or another at least five times. “Everybody has said, it’s amazing the job we’ve done in Puerto Rico.” Trump also wanted everyone to know how “nicely” governor Alejandro García Padilla has treated him. “We have had tremendous reviews from government officials," Trump repeated. “Everybody has said its amazing the job we are doing there.”

No public statement from any government officials backs up Trump’s claims. San Juan mayor Yûlin Cruz was dismayed that Trump focused on what caused the island’s destruction rather than on relief efforts that should take precedent.

Did President Trump not know where Puerto Rico was before Monday? It's entirely possible. "This is an island, sitting in the middle of the ocean. It’s a big ocean, it’s a very big ocean,” Trump said in a morning news conference. “It’s out in the ocean. You can’t just drive your trucks there from other states. It’s the most difficult job." No shit, Sherlock.

Trump on delivering aid to Puerto Rico: "This is an island sitting in the middle of an ocean. It’s a big ocean, it’s a very big ocean." pic.twitter.com/d3zkbKmQxr

The debt of the island

Ever the financier, President Trump astutely mentioned Puerto Rico’s arrears. “Texas & Florida are doing great but Puerto Rico, which was already suffering from broken infrastructure & massive debt, is in deep trouble,” Trump said in a series of Tweets on Monday night. “Much of the Island was destroyed, with billions of dollars owed to Wall Street and the banks which, sadly, must be dealt with.”

Mayor Cruz was less than pleased. "These are two different topics," Cruz responded. "One topic is the massive debt, which we know we have and it's been dealt with. But you don't put debt above people, you put people above debt."

Trump's fury over protesting NFL athletes dominated headlines this weekend. But when questioned about his priorities and why he waited to address the devastation in Puerto Rico, Trump contradicted himself. “I wasn’t preoccupied, but I’ve been ashamed,” Trump said when reporters asked if his feud with the NFL was becoming a distraction. "I have plenty of time on my hands..all I do is work.”

Trump in response to Q asking him why he's focusing on NFL instead of Puerto Rico: "I have plenty of time on my hands..all I do is work."

His love for the Puerto Rican people

In case you aren’t aware, Trump is a New Yorker. This makes him the ultimate Puerto Rican fan. “I grew up in New York, so I know many people from Puerto Rico. I know many Puerto Ricans, and they're great people” said the man known for his causal racism towards Hispanics.