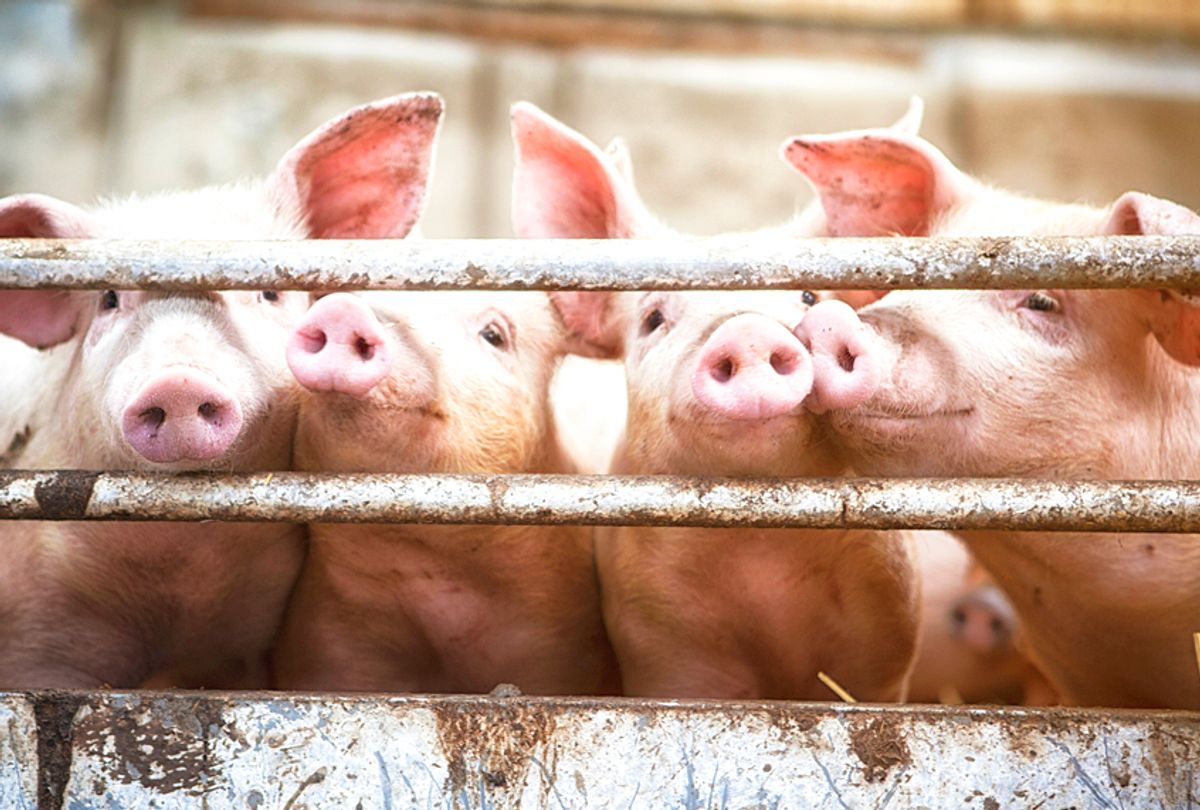 North Carolina’s number one industry is agriculture. Just take a scenic drive around any rural town in the Tarheel state and you're bound to see tobacco and sweet potato farmlands of past and present. However, one farming industry is doing its best to remain as hidden as possible.

The hog farming business of North Carolina houses roughly 10 million pigs at one time. To put that number into perspective, these hogs produce waste that is equivalent to 10 billion gallons of fecal matter, or enough waste, as Civil Eats described it recently, to fill 15,000 Olympic-size swimming pools. But it wasn’t always this way.

In the 1970s, the North Carolina hog farmer only kept an average of 60 hogs at one time. The animals were given free rein to roam the farmland, their fecal matter acting as a natural fertilizer for the land. However, in the late 1980s and early 1990s, the farming industry saw an increase in demand, and small-town hog farmers entered contracts with larger companies, which required more meat at a faster rate. The factory farming industry was born.

Factory farming is a relatively new term in the landscape of modern agriculture. It is a system designed to maximize as much output with as little input as possible. This has led to fewer jobs, small farm owners closing down because they cannot compete, and the brutal and inhumane treatment of livestock. LEARN NC reports, “In 1986, there were 15,000 farms with at least one head of hogs in the state. By the year 2006, there were only 2,300 such farms remaining.” The cycle in which factory farming employs has proven to be unsustainable, but its greatest and most imminent problem comes in the form of hog waste removal.

North Carolina hog farms store waste in open-air lagoons that are located near their farms. In an effort to recycle this waste and avoid overflow problems, they spray it onto feed crops with high-pressure guns. Due to the sheer volume of waste that is sprayed, if winds are blowing in a certain direction, they can carry the waste to nearby neighborhoods and residential areas.  And while these hog farms set up business in these rural areas because of the vast amounts of land space that is available, they also do this because they know they will not be as visible to the public.

A recent documentary titled "What the Health" exposed Duplin County, North Carolina as home to one of the largest hog farms in the country, where hogs outnumber residents 40 to one. What’s even more alarming is the towns in which these hog farms are located are predominately lower-income and house large minority populations. 25 percent of Duplin County residents are black, and over 20 percent are Hispanic. And many of these residents believe these hog farmers know exactly what they’re doing. In May, Observer reported that “A class action lawsuit was recently filed by nearly 500 residents, mostly members of affected African-American communities in eastern North Carolina, against Murphy-Brown, North Carolina’s largest hog producer, for disposing pig waste by spraying it untreated into fields near those communities.”

Recent studies have linked North Carolina’s farming industries to water and air contamination. Civil Eats cites a 2015 study of the U.S. Geological Survey and the N.C. Department of Environment and Natural Resources that "found elevated levels of ammonia and nitrates, which can kill fish and cause human illness, including the fatal 'blue baby syndrome,' in water sources near the state’s CAFOs. In the same year, Johns Hopkins University and the University of North Carolina researchers found that streams near CAFOs were contaminated with hog-related fecal bacteria, including E. coli and Enterococcus.”

Factory hog farming in North Carolina has not only affected communities but the environment in which residents are forced to live under. Sadly, the state is not showing any signs of stopping this. In the wake of the lawsuit against Murphy-Brown, North Carolina’s state legislature is pushing a bill that will ease regulations on hog operations and ultimately negatively affect county’s like Duplin even more.