Trump doesn't even pretend to be a president for all Americans, as his thoughtless cruelty makes all too clear 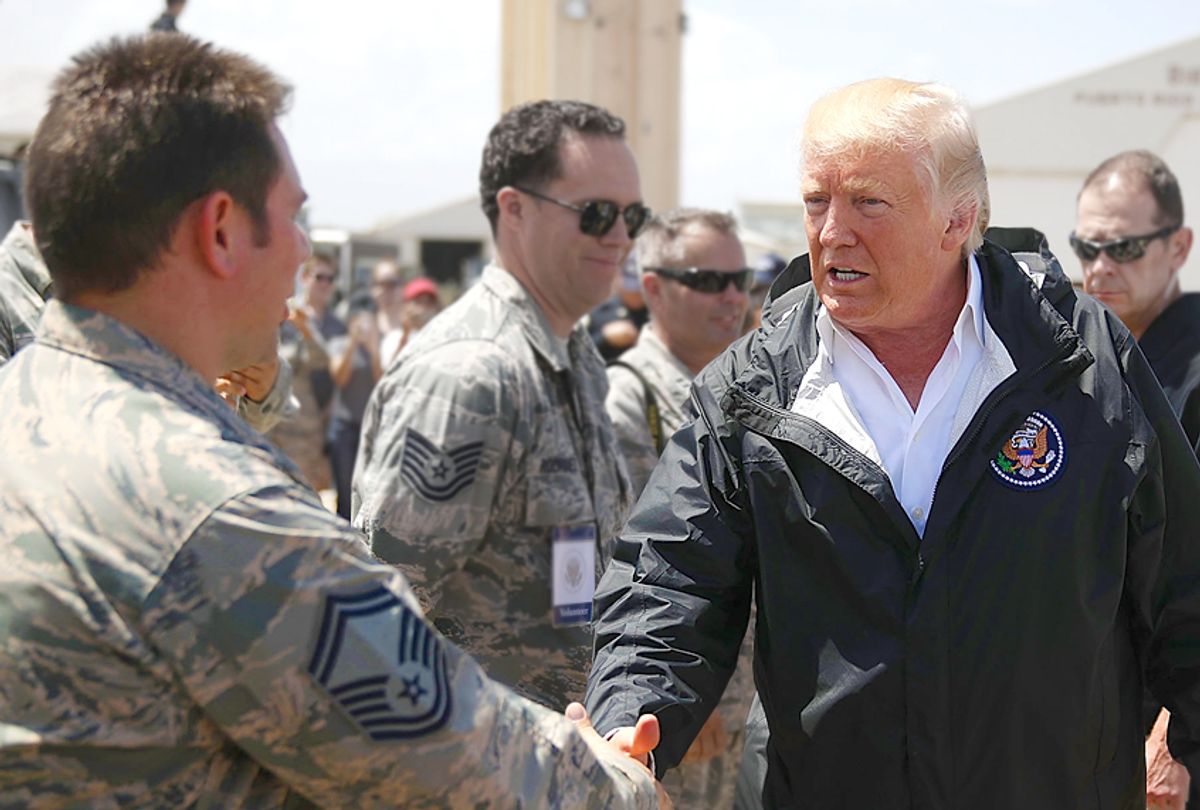 Government is supposed to exist in order to solve those problems that are too big, complex or difficult for any one given person or group to confront by themselves. Examples of this logic include the concepts of public infrastructure and public health. The U.S. Constitution speaks to this most basic responsibility of government with its language about the necessity "to provide for the general welfare." Of course, the national government is indispensable in the aftermath of natural disasters such as this year's hurricanes that have devastated Texas, Florida, Puerto Rico and the U.S. Virgin Islands.

Donald Trump finally visited Puerto Rico on Tuesday, staying an hour less than he had planned. As a Washington Post report observed, Trump seemed less interested in the travails of the island's people than in "the 'unbelievable' and 'incredible' job that his administration has done so far."

He repeatedly played down the destruction to the island, telling local officials they should feel “very proud” they ­haven’t lost hundreds of lives like in “a real catastrophe” like Hurricane Katrina along the Gulf Coast in 2005. But he also complained that the small territory’s disaster threw the nation’s budget “a little out of whack.”

For several days before the visit, San Juan Mayor Carmen Yulín Cruz has been pleading and begging the federal government for help. At a press conference last Friday, Cruz  appealed to Trump directly.

So, Mr Trump, I am begging you to take charge and save lives. After all, that is one of the founding principles of the United States of . . . America. If not, the world will see how we are treated not as second-class citizens but as animals that can be disposed of. Enough is enough.

Hurricane Maria has left the 3.4 million American citizens of Puerto Rico -- an "unincorporated territory" of the United States -- without food and fresh water for more than a week. More than 95 percent of the population is without electricity. The situation in Puerto Rico has been described as "apocalyptic." The federal government has been largely non-responsive. What has taken place in Puerto Rico is a national embarrassment and a humanitarian disaster.

While on vacation at one of his golf resorts for the 67th time during his presidency, Donald Trump responded to Cruz and his media critics with a fusillade of 18 Twitter posts. Among them were these:

The Mayor of San Juan, who was very complimentary only a few days ago, has now been told by the Democrats that you must be nasty to Trump

Such poor leadership ability by the Mayor of San Juan, and others in Puerto Rico, who are not able to get their workers to help

They want everything to be done for them when it should be a community effort. 10,000 Federal workers now on Island doing a fantastic job.

Fake News CNN and NBC are going out of their way to disparage our great First Responders as a way to "get Trump"....Not fair to FR or effort!

The Fake News Networks are working overtime in Puerto Rico doing their best to take the spirit away from our soldiers and first R's. Shame!

This is Donald Trump's core nature on display, once again, for all the world to see. He will not change. Only those reporters, journalists, pundits, and other observers who are either naive, dishonest, willfully delusional or some combination of the three can carry on pretending that Trump is capable of acting "presidential."

While any reasonable and decent human being should be disgusted by Donald Trump's comments and actions in response to the humanitarian crisis in Puerto Rico, one must also ask what his words and deeds represent. To commit the error of viewing Donald Trump in isolation is to ignore what he reveals about the rot in American society and politics.

Trump's comments reflect a profound hostility by Republicans and other conservatives to the very idea of government and the notion of "the Commons."

The silence by "mainstream" Republicans in response to Donald Trump's comments about Puerto Rico again reveals a political movement that cares more about unchecked power, gained at any cost, than it does about human rights, human dignity and the general welfare of the American people. Today's Republican Party and movement conservatives value power over country.

Trump's response to the crisis in Puerto Rico is one more maneuver in a culture war. This president only "governs" for his base -- and largely for the most extreme and rabid supporters among them. Just as Trump attacked black NFL players as "uppity," "unpatriotic" "sons of bitches," his cruelty towards Puerto Rico -- an island whose population largely speaks Spanish and includes many people of color -- pleases his voters on the most base of levels by titillating their nativism and bigotry.

For this President, the words usually matter less than the music. The point was not that he was attacking the actions of black football players; the point was that he was telling his supporters, once again, I'm one of you, I'm on your side, and I'm willing to endure the ridicule of the elites in order to say out loud what you are thinking. The descants about political correctness, racial grievance and class resentment toward millionaire athletes all reminded his base why he was one of them.

Trump's voters put him in office because they wanted to hurt their fellow Americans. This is reflected by their consistent support for his cruelty. This dynamic is made evident by new research showing that many white Americans have low levels of empathy for nonwhites in particular and poor people of any race more generally.

Trump's response to Mayor Cruz's pleas for assistance is an example of racism and misogyny in action. During his many years of public life, Donald Trump has responded with great anger towards any woman who has dared to criticize him. His anger is even more intense towards black and brown people who challenge him. This made Cruz a perfect target for his rage.

Trump's comments suggesting that Puerto Ricans were lazy people who "want everything to be done for them" is also an example of the ways poverty is gendered and racialized in the American popular imagination. Images of black "welfare queens" and "strapping young bucks," as well as Latino "illegal immigrants" who "steal jobs" and resources from "hardworking" "real Americans" are the political currency that the Republican Party has used for 50 years to gin up both subtler racial resentment and overt racism in order to win elections.

And perhaps most important in this moment, Trump's insults directed at Cruz and the suffering people of Puerto Rico demonstrate (again) the deep depths of his malignant narcissism. That Trump could win a presidential election, even in fluke fashion, is also a profound warning about the power possessed by a cult of personality that can move millions of people to support anti-democratic forces and leaders.

There is a monster in the White House. He will not change. The deeper problem remains that of what went wrong in American society that tens of millions of Trump's voters supported such a man, and continue to do so, regardless of his foul deeds and the promise of worse to come. It almost seems that the crueler and meaner Donald Trump becomes, the more excited his voters are by his behavior.

America will not survive this moment unchanged. Great powers often fall from within. Some future Edward Gibbon will write about this moment in lucid detail. Alas, we are living through it in real time. History will condemn Donald Trump's voters, supporters and enablers. But history will also not be kind to those who stood by mute, crippled from fear, who surrendered to learned helplessness or believed that Trump's America would be but a blip or interesting curiosity in the country's history. The American people's hands are now collectively stained, and the mark may be indelible.