The GOP's new abortion law isn't about "life." As Tim Murphy makes clear, it's about male power over female bodies 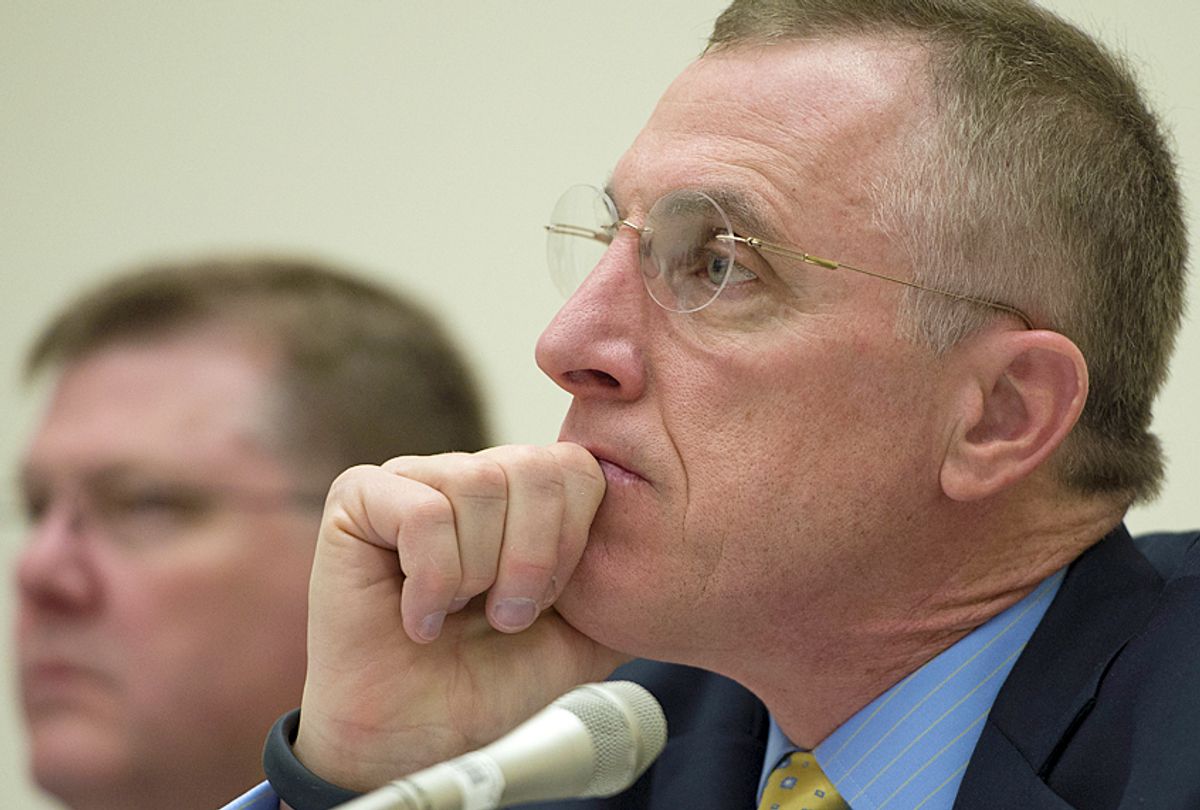 In the endless chaos of the Trump-era news cycle, reproductive rights activists owe a small debt of gratitude to Rep. Tim Murphy of Pennsylvania. Not because he did anything good, mind you. Murphy, like most of the Republican delegation to Congress, has no regard for the well-being of any humans outside of the GOP donor class. No, it's because Murphy's behavior has been so outrageous that it helped bring attention to congressional malfeasance that might not have otherwise caught much media attention.

Murphy is one of the co-sponsors of a bill that would ban abortions after the 20th week that House Republicans, 98% of whom are men, passed on Tuesday night. This was mere hours after the Pittsburgh Post-Gazette reported that Murphy's former mistress, Shannon Edwards, castigated him for posting anti-choice messages on Facebook shortly after encouraging her to abort a possible pregnancy that resulted from their extramarital affair.

The story helped draw much-needed media attention to the fact that Republicans are once again trying to deny women the kind of health care that allows women to have the kind of sex that Republican men clearly enjoy. The word "hypocrite" got a lot of mileage in subsequent coverage, an understandable choice under the circumstances.

But the grim truth is that what Murphy and other Republicans are doing with this 20-week ban is far uglier than garden-variety hypocrisy. This bill is, at its core, about promoting a vicious and misogynist stereotype about sexually active women: That they're dumb, lazy or oversexed and therefore don't deserve either health care or sympathy.

Sadly, this view of women is entirely consistent with Murphy's treatment of his former mistress, a woman he talked down to as if she were dumb. In the text messages to her that have been released, Murphy tries to play off his anti-abortion Facebook message as if it were some kind of staff error, as if he didn't have a long and easily verifiable history of undermining women's reproductive rights.

To be clear, Republicans are smart enough to pretend that the 20-week ban is not about demonizing women. The official excuse for this bill is some fake science about "fetal pain" that persists despite repeated debunking, in no small part because it wasn't offered up in good faith in the first place.

The real value in these 20-week abortion bans is propagandistic. Getting the phrase "20-week abortion" into the news cycle helps perpetuate the notion both that these kinds of abortions are common and that women who get abortions are lazy or thoughtless. This notion is flat-out false and downright defamatory.

“It’s important for people to understand that people aren’t just having late-term abortions because they feel like it. There’s usually a very good reason for it," Missouri resident Rachel Goldberg told Salon.

Goldberg should know: She had an abortion at 26 weeks after enduring multiple medical tests and weeks of waiting to determine that the fetus growing inside her had serious defects that also threatened her own health.

“The only reason I would continue the pregnancy was because I wanted the baby and not because I felt like my son would have a good quality of life," she continued. "I felt like I was just going to ask my son to suffer for my own selfish reasons, and that was something that we couldn’t really ask him to do for us.”

The reality is that abortion after 20 weeks is not common at all. More than 98 percent of women who get abortions have the procedure done before that point — and 89 percent of women get the abortion in the first 12 weeks. Many women who abort that late, like Goldberg, have serious health reasons for doing so. Others are enduring difficult or even traumatic situations that cause them to show up at the doctor's office halfway through a pregnancy.

A 2013 study published in Perspectives on Sexual and Reproductive Health by researchers Dr. Diana Foster and Dr. Katrina Kimport found that women who abort that late often had logistical problems — frequently financial in nature — that prevented earlier abortions, or had mental health issues or were in high-stress and often abusive relationships.

When women need an abortion around 20 weeks but can't get one, they often end up "tethered to violent men, and they’re also more likely to be in poverty," Dr. Sarah Roberts of the University of California, San Francisco, explained to Salon.

Roberts, who works with Advancing New Standards in Reproductive Health, has worked on research comparing women who were able to get abortions to those who weren't, due to shifting laws or gestational limits. Their findings suggest that women who seek these abortions know exactly what they are doing, as evidenced by the poorer life outcomes that result if they can't get the abortions.

Some might hope that setting the limit at 20 weeks will, if nothing else, encourage women to get abortions earlier than they might otherwise, but there's no reason to believe that.

"It’s not as if 20-week bans just lead women to come in earlier," Roberts said. "We did not actually observe that at all.”

Knowing what we do about the few women who get abortions that late in pregnancy, her observations make sense. Most women who want abortions try to get them as early as possible. Those who come later than that either had trouble getting an abortion earlier or had an emergency situation develop later in the pregnancy, as happened with Goldberg and her husband.

Unfortunately, the Republicans have been largely successful at using bills like this 20-week ban to perpetuate these nasty stereotypes of women, as evidenced by the Ordinary American© reaction on Twitter.

Republicans may make moon eyes at the camera and claim they mean no disrespect to women, but it's all a charade. Murphy's behavior is just the latest illustration. Even if this bill doesn't become law, it has successfully propagated this false notion that women who get abortions are irresponsible, mentally ill or sexually out-of-control.

That's why it's so easy for conservatives to square their support for abortion bans with repeatedly voting for guys like Murphy, who push for abortions when the women they're having sex with inconveniently become pregnant. The attack on abortion rights is an attack on women's sexuality and women's autonomy. Unfortunately, Murphy is just another in a long line of men who don't believe they have to respect women's rights just because they like having sex with women's bodies.