Republicans want to make Russia probe go away — but they can't 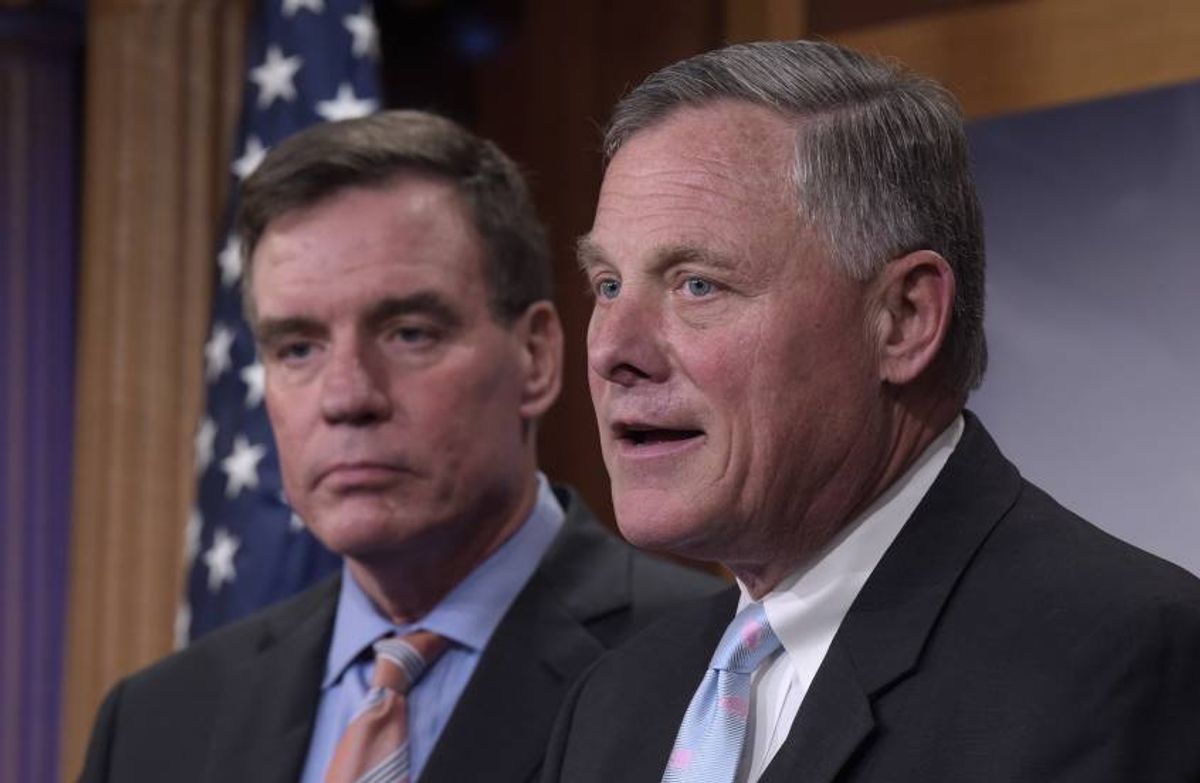 Yesterday President Trump flew to Las Vegas to meet with victims and first responders to the massacre on Sunday night and didn't make a total fool of himself. As awful as the occasion was, it was actually his best day in quite some time. At the very least, he was undoubtedly happy to be out of Washington, where the big news of the day was that Secretary of State Rex Tillerson had reportedly called him a "fucking moron" after a meeting last summer at the Pentagon, where the brass had to give their commander in chief remedial lessons on geography and elementary American history. Tillerson raced before the cameras to assure the nation that the president is "smart," but did not deny his previous remarks. Trump dismissed it all as fake news, but on some level he surely knows it wasn't.

Another unpleasant event, from Trump's point of view, unfolded Wednesday on Capitol Hill, where the Senate Intelligence Committee called a press conference to give a "progress report" on the Russia investigation. Politico reported that GOP agitation has been building over the fact that there are three separate investigations, and leaders have been leaning on the committee chairs to wrap it up. The article quoted a number of Trump loyalists complaining about Paul Ryan and Mitch McConnell's lax discipline in failing to rein in congressional probes which they saw as hampering the president's ability to get things done. These Republicans believe the investigations offer Democrats platforms to raise questions that strike at the legitimacy of the 2016 election, which is absolutely true. This is, of course, because the investigations keep turning up new evidence that strikes at the legitimacy of the 2016 election.

Needless to say, this sort of complaint is pretty rich coming from the Republican Party, which spent years and many millions of dollars investigating the attack on the U.S. embassy in Benghazi, despite each one of those eight investigations turning up little evidence of anything nefarious. By way of comparison, there have only been seven investigations of terrorist attacks against Americans over the past 20 years and zero investigations into the numerous attacks on embassies over the same period. Yet from 2012 to 2015, five different committees held dramatic televised public hearings that were clearly designed to damage the reputation of then-Secretary of State Hillary Clinton as she prepared to run for president.

Recall House Majority Leader Kevin McCarthy letting the cat out of the bag:

Everybody thought Hillary Clinton was unbeatable, right? But we put together a Benghazi special committee, a select committee. What are her numbers today? Her numbers are dropping. Why? Because she’s untrustable. But no one would have known any of that had happened, had we not fought.

He couldn't have made their strategy any plainer.

But the real issue with the Russia probes has little to do with the Democrats. This is part of Steve Bannon's ongoing crusade to take down the GOP leadership and prove his king-slayer bona fides to the GOP base. In an interview on Fox News, Bannon explicitly framed the investigations as personal assaults on the president, saying, “Mitch McConnell and Paul Ryan have allowed three investigative committees on Capitol Hill with full subpoena power, they're going after President Trump every day.”

So far, most GOP officials are counting on their fellow Republicans to protect the president from harm, but some are frustrated that the committees haven't used that subpoena power to go after Clinton or further probe former FBI Director James Comey for what they see as his protective behavior toward her. (I'm not kidding.) They seem to think that Democrats would never be a party to investigating a Democratic president because, as one congressman said, "My friends on the other side of the aisle, they view almost everything through a political lens and Republicans don’t seem to do that as well.” It's possible he actually believes that.

But as much as this sounds like just more GOP intrigue, The Washington Post's Greg Sargent reported that Senate Intelligence Committee chair Richard Burr was taking this criticism seriously. Apparently Burr is even feeling the pressure from his own base in North Carolina and had proposed that his committee issue an "interim report" on its findings so far, in hopes of quelling some of the party's nervousness. Democrats successfully talked him out of that, and they settled on holding the press conference to update the public and take questions. It turns out to have been a mixed bag for the president.

Burr appeared with his Democratic ranking member, Sen. Mark Warner of Virginia, and contradicted the president, saying that Russian interference in the election was very serious. He implored the government at all levels to launch an urgent effort to prevent it from happening again. Burr said the committee was closing the book on James Comey and referred all further questions to special counsel Robert Mueller. He also claimed the investigation had "hit a wall" with the infamous "Steele dossier," because they had been unable to question its author, former British intelligence officer Christopher Steele. (He has refused to speak with partisan investigators.) Burr also said that the issue of collusion is still an open question, which is surely the area of greatest danger for Donald Trump and his inner circle.

Burr signaled his loyalty to the president, on the other hand, by refusing to contradict Trump's insistence that the scandal is a hoax or acknowledging that Russian interference may have affected the election results. Most absurdly, he would not admit that the Russian effort was clearly designed to help Trump, insisting that it was only an operation to sow chaos. Apparently it's just a coincidence that none of the ads, social media campaigns or hacking operations disadvantaged Trump in any way.

Warner pointedly said that the committee would love to wrap things up but that evidence about Donald Trump Jr.'s infamous meetings with Russians, or news that Trump sought Russian government cooperation to build a hotel in Moscow while he was campaigning for president, made that difficult. Burr, standing next to him, ruefully nodded. It's hard to close out an investigation when new information comes over the transom almost every day.

In the end, Burr's gambit failed. It put nothing of importance to bed and instead brought the Russia investigation right back into the news cycle. Luckily for Burr, Trump can't fire him.