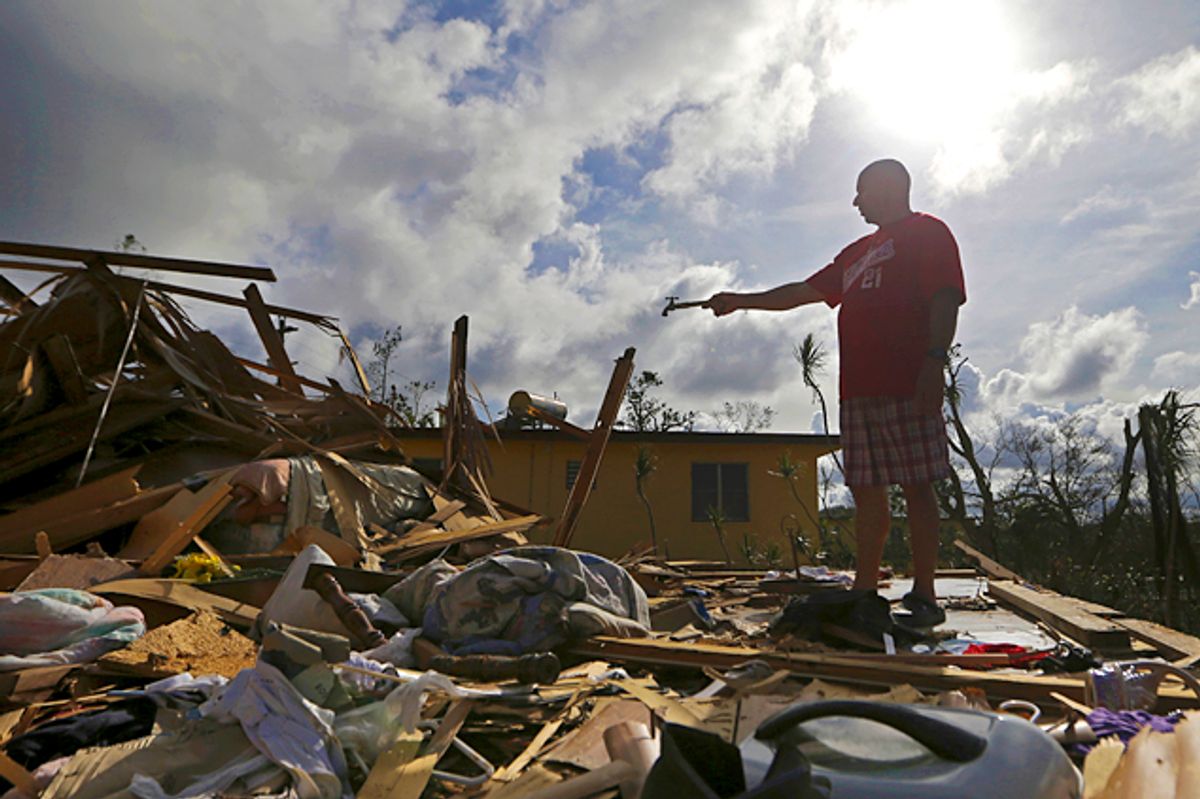 Jose Garcia Vicente holds a piece of plumbing he picked up, as he shows his destroyed home, in the aftermath of Hurricane Maria, in Aibonito, Puerto Rico, Monday, Sept. 25, 2017. The U.S. ramped up its response Monday to the humanitarian crisis in Puerto Rico while the Trump administration sought to blunt criticism that its response to Hurricane Maria has fallen short of it efforts in Texas and Florida after the recent hurricanes there. (AP Photo/Gerald Herbert) (AP)
--

On Thursday morning, data on access to water and electricity in hurricane-ravaged Puerto Rico was mysteriously missing from the FEMA website. The metrics had been there on Wednesday. Following outrage, the statistics were back online by Friday afternoon.

FEMA spokesman William Booher told the Washington Post that the data was available on www.status.pr, a Spanish-language website being run by Puerto Rican governor Ricardo Rosselló. He did not provide an explanation as to why the data was suddenly taken off FEMA’s website, but reiterated that it was “readily available” on the governor’s site.

The site shows that 10.7 percent of the island now has electricity and 55.5 percent of residents have access to drinking water. The FEMA site claims to have provided “millions of meals and millions of liters of water” but does not show the percentage of access to water on their own page.

"To avoid any further confusion," FEMA will now post data on electricity and water access in Puerto Rico on its main website, the agency announced late Friday.

Statistics on the FEMA website indicate that the number of federal staff and FEMA personnel on the ground engaging in recovery efforts in Puerto Rico and the U.S. Virgin Islands is upwards of 14,000. It also says that over 30 miles of roadway are now clear and that all airports are “open or open with restrictions,” which is echoed on Rosselló’s site.

Though conditions are slowly improving, recovery on the island is certainly far from over. Trump has touted the recovery efforts on Twitter, claiming that “amazing work” has been done in an “almost impossible situation” while blasting the “Fake News” media.

Trump has touted the recovery efforts on Twitter, claiming that “amazing work” has been done in an “almost impossible situation” while blasting the “Fake News” media.

We have done a great job with the almost impossible situation in Puerto Rico. Outside of the Fake News or politically motivated ingrates,...

...people are now starting to recognize the amazing work that has been done by FEMA and our great Military. All buildings now inspected..... — Donald J. Trump (@realDonaldTrump) October 1, 2017

...for safety. Thank you to the Governor of P.R. and to all of those who are working so closely with our First Responders. Fantastic job!

The accuracy of the tweets was not exactly 100 percent, but that is hardly the point. With almost 90 percent of Puerto Rico still without power and nearly half its people without access to drinking water, there is clearly more work to be done. And it remains a mystery why FEMA would remove these two metrics from their website, considering water and electricity are the two most essential components needed to restore normal life and stop much of the suffering taking place.