Anti-Semitism in the alt-right age: It's "the bellwether of society" 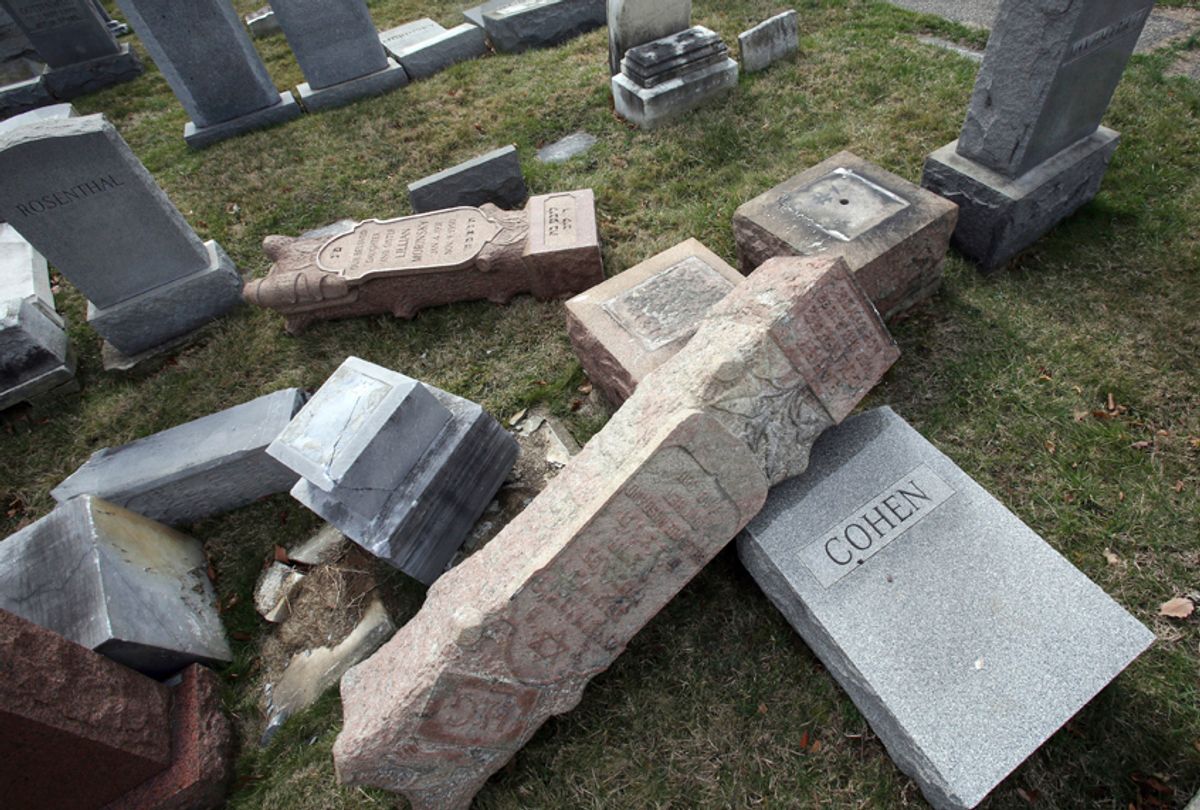 Bob Dylan, in full exercise of his acidic tongue, sings of the Jewish people, and manages to capture the history of anti-Semitic imbecility, in his 1983 song, "Neighborhood Bully."

Well, he knocked out a lynch mob, he was criticized
Old women condemned him, said he should apologize
Then he destroyed a bomb factory, nobody was glad
The bombs were meant for him. He was supposed to feel bad
He's the neighborhood bully

One of the few constancies of human affairs that historians can monitor is hatred and hostility toward Jews. As Americans become more conspiratorial in their paranoia, and President Donald Trump empowers the "alt-right," anti-Semites have begun to broadcast their pseudo-intellectual screams with great fervor and frequency. "Jews will not replace us," the Charlottesville cowards shouted while posing tough, but demonstrating a debilitating weakness in their belief that Jews are a “globalist” bully that poses an existential threat to white survival.

Sigmund Freud believed that anti-Semitism emanates out of resentment for Jewish existence. The Christian story offers fallible humans an opportunity for absolution, and the mere presence of Jews signals that the redemptive promise is either invalid or uncertain. Jews, as Lonnie Nasatir, the Midwest Director of the Anti-Defamation League, explains, are “convenient scapegoats” for unsuccessful members of society — people who find comfort in the belief that an enemy is responsible for all of their problems.

Nasatir devotes himself to eradicating an ancient impulse of bigotry and, in the meantime, reducing its societal influence. The ADL also contributes to other worthy causes of social progress and political improvement. Recently, the Chicago office of the ADL provided training for police officers to combat implicit bias against racial and religious minorities.

Nasatir demonstrates a quick and pugnacious mind, and he offers profound insight on the current cultural morass of dysfunction, full of rising expressions, both verbal and violent, of anti-Semitism, conspiracy theory nonsense, and the presidential betrayal of American diversity.

We recently discussed contemporary anti-Semitism over the phone.

Is anti-Semitism on the increase and, if so, to what do you attribute it?

In the last year, are there necessarily more people harboring anti-Semitism? Not really, and our studies bear that out.

We’ve conducted studies on anti-Semitism since the 1960s, and in 1964 — and by the way, it is an apples to apples study, because we use the same 11 questions — it was about 24 percent of people with anti-Semitic views. The one we did last year was 14 percent. I’d have to say that I would be shocked if it went up. So, that is the good news. We’re trending in the right direction.

Would I love for the number to be 1 percent? Of course. Going forward, 10-15 percent of 350 million people, you’re talking about over 35 million people infected with anti-Semitism, and that’s not a good thing, but that number isn’t going up.

Now, have we seen more expressions of anti-Semitism in the past year to year and a half? Absolutely. In the way of vandalism, harassment and assault, those expressions have absolutely increased.

The ADL has 26 regional offices. Whenever we hear of an anti-Semitic incident, we put it into our system. It is our own science — not perfect — but it is 26 offices over the past 30 years putting data into a database, and then kicking out the numbers. From 2015 to 2016, we saw a dramatic spike — a 34 percent increase — in anti-Semitic incidents. What’s even more shocking is that from 2016 to ’17, first quarter — so first quarter ’16 to first quarter ’17 — we’ve seen an 86 percent increase. That’s huge.

We feel that all of a sudden due to the divisive election cycle, full of dog whistles to the alt-right, and the continued emergence of the alt-right, there are anti-Semites who feel emboldened, and are willing to act out on their anti-Semitic ideology.

Emboldened by what factors and forces precisely?

In the Trump campaign, there was a usage of white supremacist flyers, particularly the piece with Hillary’s picture and money and the notion of Jewish control. We alerted them, and they took it down. There was a video they used with several Jewish faces with the message that these are the people running America. That also went to this notion of Jewish control, Jewish influence and Jewish authority, and we found that disturbing. Those tacit acknowledgements of anti-Semitic legitimacy emboldened anti-Semites.

It is no surprise that in Charlottesville, we saw the largest gathering of white nationalists, white supremacists, right wing extremists in 15 years. Here again, we have to talk about the president. His first-day response was one of equivocation, and we expressed concern that he was, again, emboldening them. Then, the next day, he cleaned up his language, and said “white supremacy is wrong.” Then, the following day, he went on that now infamous rant claiming that there “were good people” on that side as well. Our research and data shows that those people were hardcore white supremacists, KKK, neo-Nazi members. The core of what they are about is anti-Semitism and racism, attempting to rid the country of anyone who is not white. That’s the message. That’s their mission.

You mentioned the anti-Semitic conspiracy theory. It seems that Americans are becoming increasingly conspiracy-minded in their political opinions. Does the possibility of Americans taking an extra step, given that the Jewish cabal is the most stupid and insidious conspiracy theory, concern you?

Do you have any speculation as to why Americans are growing increasingly conspiracy-minded?

I think it grows out of a cynicism that is prevalent on both sides. There is just such a general disgust with government, and a deep distrust of government, that it lends itself to conspiracies as explanation for why the government isn’t doing what they are supposed to do, in many people’s minds. The distrust was visible in the Bernie Sanders movement and the Donald Trump movement. There was the notion that all the “insiders” are untrustworthy, and therefore, what we need is an outsider. So, when people see governmental dysfunction, it is easy for them to jump to conclusions, and embrace some of these theories.

Both liberals and conservatives criticize anti-Semitism, and claim moral superiority by accusing the other side of harboring it. What elements of anti-Semitism on both left and right do you see?

On the right it is much more overt, especially given what we saw in Charlottesville with the white supremacist organizations. They don’t hold back. There is nothing subtle. They are very clear that they think Jews are running the country, and that they are running it for themselves. It all goes back to the Protocols of the Elders of Zion. On the left, it is much subtle. It is much more anti-Semitism in the guise of anti-Israel. Now, by the way, at ADL we completely acknowledge and appreciate that there is legitimate criticism of Israel and Israeli policy — no settlements, two-state solution. All of that is legitimate, and you can see it in the Israeli newspapers. If you ask two Israelis about the Israeli-Palestine conflict, you’ll get two different opinions. However, when we see campaigns to delegitimize Israel, treating Israel different from any other country, demonization of Israel, that’s when we begin to say, “No, this is not legitimate critique. This is anti-Jewish.”

The BDS movement, for example, is something that is tough for us. We speak out against it. We believe that it is a campaign clearly unfair in its targeting of one state, and one state only. The notion that there is genocide against the Palestinians is a gross misstatement, and it inflames the situation, making it much worse. Now, not all the participants in the movement are anti-Semitic, but the architects clearly are, because their ultimate aim, by their own admission, is to wipe the state of Israel off the map. On the left, it is harder to define and unpack, but when you begin to see these general trends, it leads you to one place.

Where do you demarcate the border between legitimate criticism of Israel and anti-Semitism?

You have to look at the language. When you begin to see language demonizing Israelis, or you see a cartoon of Netanyahu with a big nose, or cartoons of Jews drinking the blood of Palestinian children, it is anti-Semitism. Now, when we saw some of the Protestant and Presbyterian movements in this country making overtures to divest from Israel, we asked, “Wait a minute – What other countries are you going after in terms of disinvestment? Are you looking at what happens in African countries? Venezuela? North Korea? Why are you looking at only one country?” If you look at what happens with the United Nations when one in every three resolutions are against Israel, that is a double standard.

How would you evaluate the mainstream media’s coverage of anti-Semitism?

That’s a great question. They don’t ignore it. We had a bad incident here in Chicago in February in which a guy smashed a synagogue window, and put two swastika stickers up. The media was all over it. They conducted an interview with me, and wanted to get our response. I think that most media outlets are startled by it, just like they are when there is an incident that involves racism or homophobia. The media covers anti-Semitism, as well as other acts of discrimination. There is a reflexive sense of astonishment that anti-Semitism exists only because Jews have done so well in this country in the last few decades. We have Jewish Supreme Court Justices. There are many Jewish CEOs of major companies. The Federal Reserve Chair was Jewish. Jews have been able to reach the highest rungs of business, government and judiciary, and that’s a wonderful thing, but it creates a sense of complacency. People think, “There’s no anti-Semitism in this country.”

But then we have these stark reminders of all the hate crimes we monitor that show that this age-old hatred still exists. Now, interestingly, in Charlottesville, the chants were all about Jews — “Blood and Soil,” “Jews will not replace us.” It did not surprise us, because we’ve monitored how at the core of white supremacy is a hatred for Jews, but I think the rest of the world was surprised.

For those who are reading this story, and are complacent, both Jewish and non-Jewish, what would you say about the dangers of anti-Semitism and keeping a close eye on it?

Anti-Semitism is the bellwether of society. Where there is anti-Semitism, you can be sure that there is going to be racism, and homophobia, and all the rest. When societies embrace one -ism, other -isms start to attach themselves to it. We cannot begin to normalize or tolerate any of this behavior. If we do, our society is in trouble.

This interview has been condensed for length.