Gun control and history: It's never been about the Second Amendment 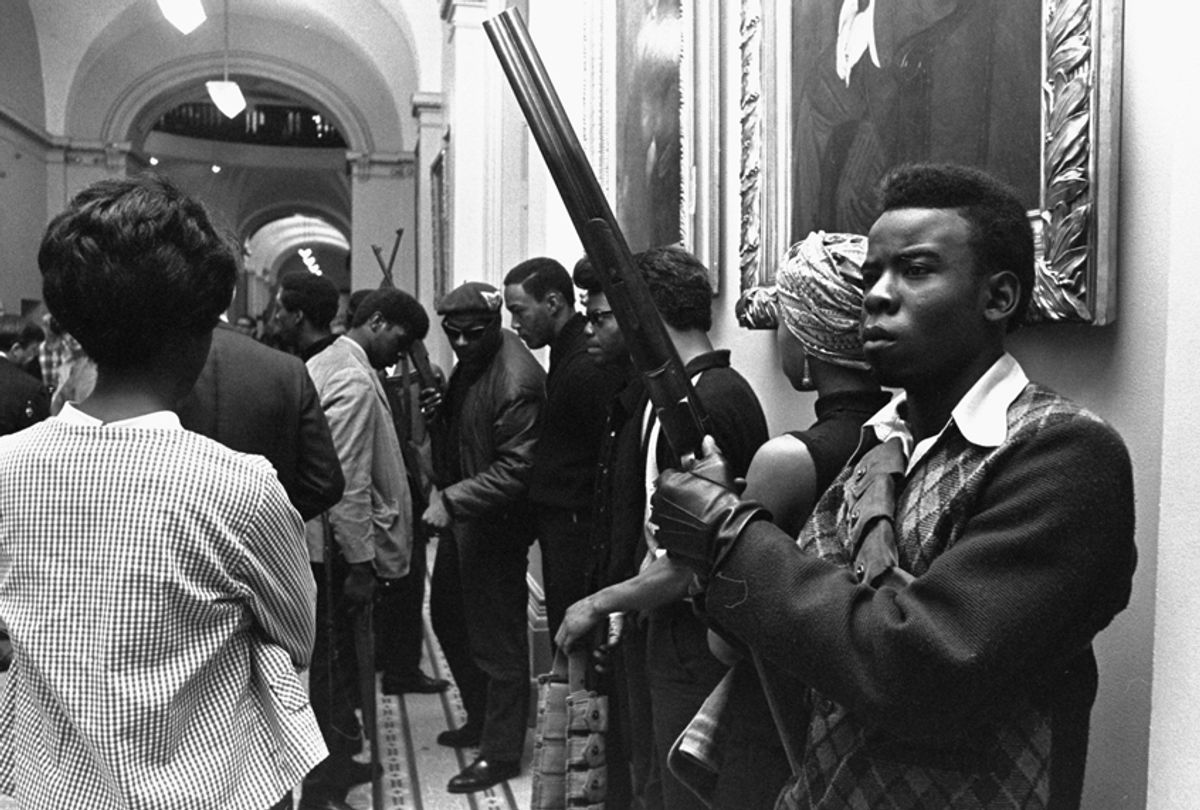 Armed members of the Black Panthers Party in the Capitol in Sacramento, May 2, 1967. (AP/Walt Zeboski)
--

In a 2016 infomercial recently unearthed by NBC's Chuck Todd, President Donald Trump's eldest son can be seen testing out a silencer on several guns, then waxing poetic about the importance of the Second Amendment.

"I mean, the Second Amendment for us, for me, it's not just a passion and a hobby that I do every weekend. I mean, it's a lifestyle. It's the thing that our Founding Fathers thought of right after free speech and religion," Donald Trump Jr. solemnly intoned.

References to the sanctity of the Second Amendment are practically inescapable whenever Americans today try to discuss gun regulation. If the opponents of gun control are to be believed, the issue is simply one of either respecting or not respecting the Constitution (or whatever fake quotes from the Founding Fathers they can dredge up). Raise the prospect of imposing even modest regulations — such as banning semiautomatic weapons or strengthening background checks — and you'll immediately hear the Second Amendment whipped out like the ultimate trump card (no pun intended).

Yet until relatively recently in American history, the notion that all forms of gun control threatened Americans' constitutional rights simply didn't exist. When that did become popular in the late 20th century, it wasn't due to a renaissance in strict constitutional construction, but as a sop to paranoid right-wing fantasies.

Run your fingers through the judicial history of gun control efforts and a few prominent cases and laws rise to the fore. In the Kentucky case Bliss v. Commonwealth in 1822, a Kentucky court ruled that the state government did not have the right to curtail individuals' abilities to bear arms (in that case a concealed sword cane) because the Second Amendment was an individual right. Twenty years later, however, a higher court in Arkansas ruled in the case of State v. Buzzard that "the words 'a well regulated militia being necessary for the security of a free State,' and the words 'common defense' clearly show the true intent and meaning of these Constitutions and prove that it is a political and not an individual right, and, of course, that the State, in her legislative capacity, has the right to regulate and control it."

You may have noticed that the ruling directly quoted the cryptic language of the Second Amendment itself:

A well regulated militia being necessary to the security of a free state, the right of the people to keep and bear arms shall not be infringed.

It makes more sense when you consider that the Second Amendment was written with this passage of the Constitution in mind:

The Congress shall have Power ... To raise and support Armies, but no Appropriation of Money to that Use shall be for a longer Term than two Years; To provide and maintain a Navy; To make Rules for the Government and Regulation of the land and naval Forces; To provide for calling forth the Militia to execute the Laws of the Union, suppress Insurrections and repel Invasions ...

So the Second Amendment, when placed into the context of Article 1, Section 8 of the Constitution, was intended to make sure that American citizens could participate in militias rather than have a standing army. The founding fathers did indeed want every white male to own a gun (even passing the Militia Act of 1792 to require gun ownership), but only for that specific purpose.

Considering that America today has one of the most powerful standing armies in the world, it is safe to say that this logic belongs to an obsolete era.

It is also worth noting that the founding fathers did not believe that everyone had a right to own a gun: African-Americans, whether enslaved or free, were not allowed to own guns. Neither were white people who didn't swear loyalty to the patriot cause.

It's easy to forget that the Second Amendment does not simply state that people have a right "to keep and bear arms," but that their ability to do so draws on the founders' belief that "a well regulated militia" was "necessary to the security of a free state." While some courts have argued that this automatically meant that the ability to own guns was an individual right, that interpretation was not nearly as absolute in the minds of early 19th-century jurists — who were the first to grapple with the implications of the founders' core documents — as it is among conservatives today.

Subsequent court cases and laws reinforced this notion. In the 1875 Supreme Court case United States v. Cruikshank, the court found that the Second Amendment only limited the powers of the national government, with state governments being permitted to regulate firearms as they saw fit. By 1934, the National Firearms Act was passed to sharply curtail the types of guns that ordinary citizens could own, as a method of fighting organized crime. This happened with the full support of the National Rifle Association, whose president at the time, Karl Frederick, argued that the need to regulate firearms "lies in an enlightened public sentiment and in intelligent legislative action" and "is not to be found in the Constitution." Five years later, the Supreme Court overturned a lower court judge's effort to deem the National Firearms Act unconstitutional.

Perhaps the most striking moment in the history of the gun control movement came with the events that led to the passage of the Omnibus Crime Control and Safe Streets Act and Gun Control Act of 1968. After the Black Panther movement made headlines by openly brandishing firearms on the street to stop police officers from violating the rights of African-Americans, California Gov. Ronald Reagan threw his weight behind a state law called the Mulford Act of 1967 that imposed harsh new gun control measures. As Reagan put it, there was "no reason why on the street today a citizen should be carrying loaded weapons," and he argued that guns were a "ridiculous way to solve problems that have to be solved among people of good will."

By 1968, the Panthers' notoriety, along with the assassinations of Martin Luther King Jr. and Robert F. Kennedy, prompted the passage of the two aforementioned gun control measures. The laws imposed stricter licensing requirements on gun dealers and barred certain individuals from owning firearms, including convicted felons, drug users, minors and individuals with mental illnesses.

The Black Panthers' assertion of their gun control rights was pivotal for another reason. Not only did it spur the passage of a major gun control law, it also clearly demonstrated that the right's opposition to gun control legislation has never really been about a fealty to constitutional principles.

Less than a decade after Reagan argued that it was "ridiculous" for people to walk around packing heat, he changed his tune. In large part, the impetus was a 1977 coup within the NRA, with right-wingers seizing control of the organization from its traditional leaders, who viewed it as more of a sportsmen's club. Led by a journalist named Neal Knox, the new NRA leaders staked out a passionately anti-government course, depicting gun control legislation — in particular, the creation of the Bureau of Alcohol, Tobacco and Firearms — as part of a sinister liberal agenda. As Knox himself put it when describing the 1960s:

Is it possible that some of those incidents could have been created for the purpose of disarming the people of the free world? With drugs and evil intent, it’s possible. Rampant paranoia on my part? Maybe. But there have been far too many coincidences to ignore.

From there, the rest of the story seems practically inevitable. Once "gun ownership" was equated with toughness on crime rather than the perpetuation of it, and with preventing racial equality rather than furthering it, hating the federal government rather than protecting it, and defying liberalism in general ... Well, at that point, it became inevitable that the newly-politicized NRA would take the lead against all manner of gun control legislation, from the Brady Bill of 1993 and the Federal Assault Weapons Ban of 1994 to President Barack Obama's unsuccessful gun control efforts after the Sandy Hook Elementary School shooting.

What's more, thanks to the rise of Ronald Reagan (whom the NRA backed once he foreswore his previous support for gun control), the NRA's doctrine of Second Amendment fundamentalism was quickly adopted by the mainstream conservative movement. The rest, as they say, is history.

This isn't to say that the original and more nuanced interpretation of the Second Amendment has gone completely by the wayside. Even when the Supreme Court ruled in the 2008 case Dean v. Heller that the Second Amendment does guarantee an individual right to bear arms, Justice Antonin Scalia acknowledged that "like most rights, the Second Amendment right is not unlimited," citing concealed weapons laws and prohibitions against firearm ownership by felons and the mentally ill as examples.

At the same time, all sense of nuance has been completely lost from the public discourse about gun control politics over the last 40 years. As a result, we live in a society where the slippery slope fallacy has become commonplace in our political discourse (i.e., the notion that if you impose even mild regulations on firearms, it will lead to mass confiscation of weapons) and in which toxic masculinity costs thousands of lives every year.

That last point really needs to be emphasized. When discussing gun control with contemporary conservatives, you will frequently hear the maxim that the best antidote to a bad guy with a gun is a good guy with a gun. Or you'll hear that ordinary citizens need to be able to own firearms in order to stop a tyrannical government — an absurd notion since, by that logic, individuals would need access to nuclear bombs and other weapons of mass destruction just to even the score.

In short, we live in an era when toxic masculinity and right-wing nonsense has overwhelmed what used to be a more reasonable discussion about gun control. The Second Amendment, instead of being used as our founding fathers intended, has been ripped out of context and used to endanger the lives of millions of Americans.