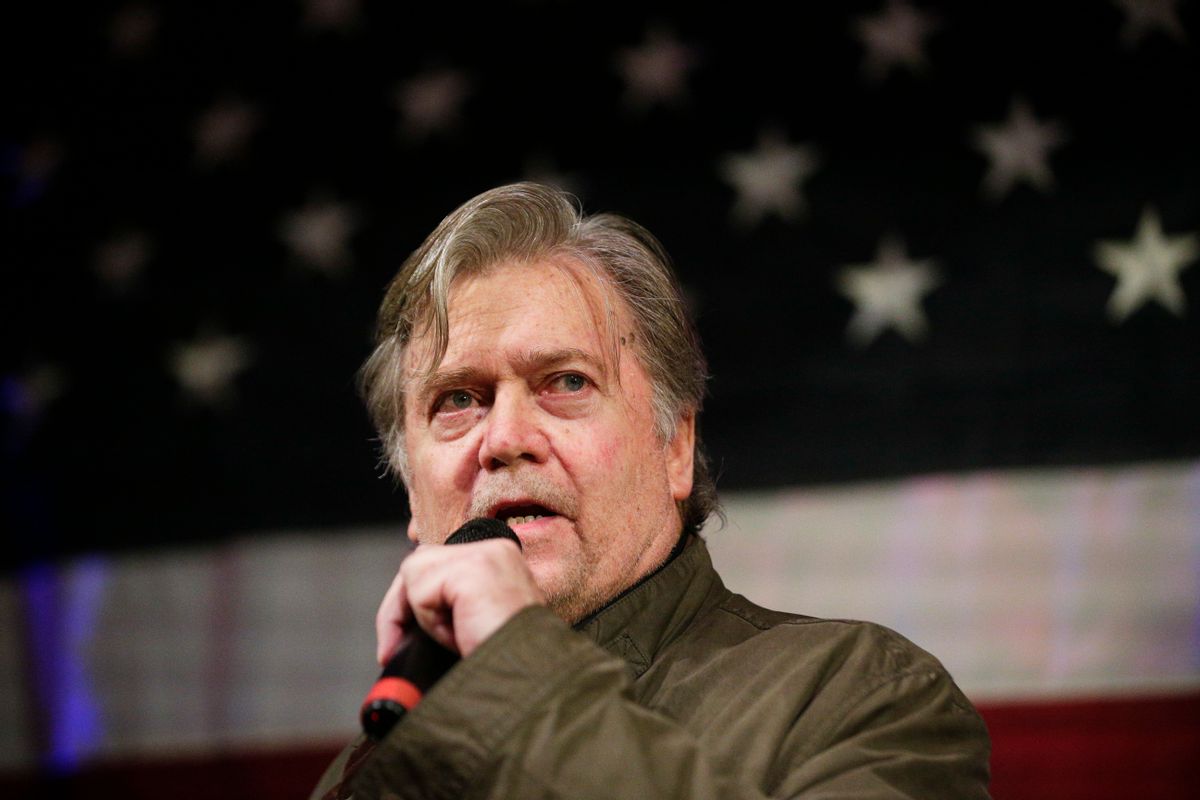 Now that former White House strategist Steve Bannon has settled back into his old post at Breitbart News, he's gearing up to resume his war against rival Republicans whom he sees as too moderate.

Trying to knock off "moderate" or "establishment" Republicans has been a conservative pastime for at least 60 years, but this time around, Bannon is looking to do more than just elect people who say the phrases the GOP far right wants to hear. According to Bloomberg News, Donald Trump's former chief strategist is making only two demands of potential candidates: that they promise to end the filibuster in the U.S. Senate, and that they promise to vote for someone who isn't Mitch McConnell to lead the Republicans in the chamber.

Until recently, defending the filibuster tradition of requiring 60 votes in the Senate to pass legislation not directly connected with budgetary matters was something that Republicans of all stripes wanted to defend. Texas Sen. Ted Cruz and Kentucky Sen. Rand Paul, both Republicans, have strongly defended it over the years.

Under Trump, however, the filibuster has finally come under sustained attack from the GOP's right flank, since the party's slim majority in the Senate has necessitated that major legislation -- such as repealing the Affordable Health Care Act -- had to be trimmed down significantly in order to comply with chamber rules. The president and the Republican leadership's efforts have also gone down to defeat thanks to a small handful of members going their own way.

"I can control what we can control," he told Hannity. "We're doing our job in the House and rooting for our friends in the Senate to get it done. We're really disappointed in health care, but we have a chance to get the big things done.

While hardcore conservative activists have made significant errors in backing fringe candidates (onetime Delaware Senate candidate and Tea Party favorite Christine O'Donnell comes to mind), the math on eliminating the filibuster actually makes sense for the GOP. Republicans generally perform better in sparsely populated inland states and thus have a built-in advantage in the Senate. In 2016, Trump won 30 states compared to just 20 for Democrat Hillary Clinton, even though Clinton won the popular vote by a margin 2.1 percent. In 2012, Mitt Romney won 24 states, even though he lost the popular vote by nearly 4 percentage points.

McConnell has adamantly refused to get rid of the filibuster, however, largely because he doesn't relish the prospect of a straight majority vote being used by Democrats if and when they regain control of the chamber. Deposing McConnell will not only eject a figure who has become widely loathed on the far right, it will also potentially allow a new majority leader to come in and ditch the filibuster.

According to several reports, Bannon has several GOP senators in his sights for 2018, including Mississippi's Roger Wicker, Nevada's Dean Heller, and Arizona's Jeff Flake.

A campaign against Flake would give Bannon a chance to get back on the same electoral team with Trump after the two backed opposing candidates in the Alabama Senate primary. Ultimately, Bannon's pick, Christian nationalist Roy Moore, prevailed over appointed incumbent Sen. Luther Strange, whom Trump supported. The president and Flake have sparred repeatedly since Trump's emergence as a political figure.

In terms of policies, Flake and Trump seem to differ very little. FiveThirtyEight's system for tracking White House policy positions in comparison to those favored by members of Congress shows that Flake votes with Trump 91.5 percent of the time, despite the fact that Arizona is almost a swing state at the presidential level.

Trump's weekend feud with Tennessee Sen. Bob Corker seems to be another case of the president picking fights based on style rather than substance, as Corker has largely been supportive of Trump's agenda. He votes with Trump 87.5 percent of the time, according to FiveThirtyEight's tracker.

Bannon is also reportedly interested in helping Erik Prince, the controversial military contractor, mount a challenge to Wyoming Sen. John Barrasso, even though Barrasso has toed the presidential line 95.9 percent of the time and has never voiced any public disagreement with Trump.