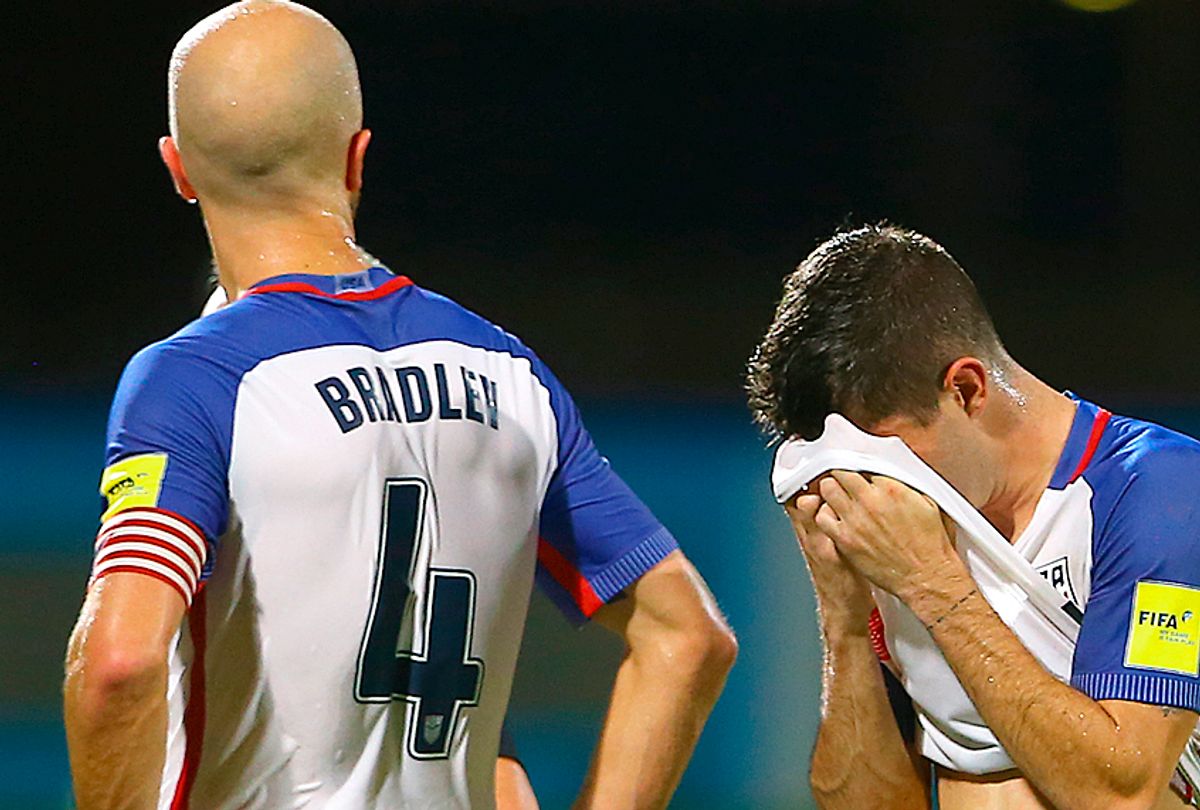 In a 2-1 loss to Trinidad and Tobago on Tuesday night, the United States Men’s National Soccer Team failed to clinch a spot in the 2018 FIFA World Cup. This marks the first time the U.S. has been eliminated for contention in the World Cup since 1986.

The USMNT, which has struggled of late, had several opportunities to solidify their spot — against Honduras or Costa Rica last month, or against Panama in March, reported NPR. The hew and cry over it has been heard all across the media, some citing a lack of proper organization and recruitment, some seeing the lack of effort as embarrassing. All of it sounds as if the United States simply failed to forward a team that could play on an international level.

That is, of course, not true.

Our women’s team is currently ranked number one in the world ahead of Germany, and not only qualified for, but won the last FIFA Women’s World Cup in 2015. This comes on top of wins in 1991 and 1999. Indeed, the U.S. women's squad has not come in below third place in the tournament's history. The USWNT has also medaled in every Olympics from 1996, when the sport entered the games, to 2016 when it lost in the quarterfinals in a penalty shootout.

For the last two decades — basically most of the history of international women's teams — the USWNT has either dominated or remained a considerable threat. The USMNT cannot say anything even remotely similar of itself. And, yet, the men on our national team out earn those on the women's side. It begs the question: Why are the men paid more when the women are the ones winning?

Friendly reminder @ussoccer: The US Women's National Soccer team is ranked 1 & they're paid less than a team that just missed the World Cup.

Of course, the debate is much more nuanced than it may seem on the surface; things like revenue generation and ratings must be taken into account, but the striking pay disparity between men and women is much greater than it should be, especially considering the performances of both teams.

In April of last year, The New York Times published a report detailing U.S. Soccer revenue and players’ pay breakdowns. Although the men’s team, as expected, has generally raised more revenue in past years, the women’s victory in 2015, followed by their 10-city victory tour, caused a massive spike in earnings for U.S. Soccer — catapulting the women's revenue past that of the men’s team. Their profit, at $6.6 million, was over three times that of the men, at $2 million.

While the top-ranking players on both the men’s and women’s teams are paid similarly — $1.4 million and $1.2 million, respectively — the disparity increases as you go down the rankings; the 50th ranking male player made just over $246,238, while the 50th ranking female player’s earnings were shy of $26,000, according to the Times report.

A graphic within the report further unpacks the pay gap; the women are given lower traveling allowances and sponsorship appearances, lower World Cup bonuses and lower bonuses for winning their regular exhibition games. The graphic indicates that if the women were to win all their exhibition games, their average pay would be $99,000 — still lower than that of the men, at $100,000 if they were to lose all their games.

And the problem isn’t just in soccer; the gender wage gap is growing in professional basketball and prize money in professional golf championships is significantly higher for men than women. Women are even shortchanged at the college level. According the a March 2016 report in the Times, the NCAA awards a total of $1.56 million for men’s basketball tournament victories — it awards nothing for women.

Obviously, ratings and revenue generally sway in men’s favor, but society’s general preference for men’s sports is also rooted in a history of sexism in athletics. It's something that creates a horrid feedback loop. Inadequate funding deters women from going pro, the pro leagues do not develop as well as they could, remaining out of the public eye, thus demanding less funding on the Olympic and collegiate level, thus deterring even more women from going pro.

At least in the case of soccer, there’s no legitimate reason for such an incredible disparity in earnings — women’s teams also matter. Once people realize that, they might also realize that the U.S. is home to a number-one ranked soccer team, which may also lighten the blow of the USMNT’s absence in the World Cup next year.