Paris, Oxford to ban fuel-burning cars, U.S. to do nothing

But even as those cities stand up, the U.S. remains steadfast in its dependence on fossil fuels 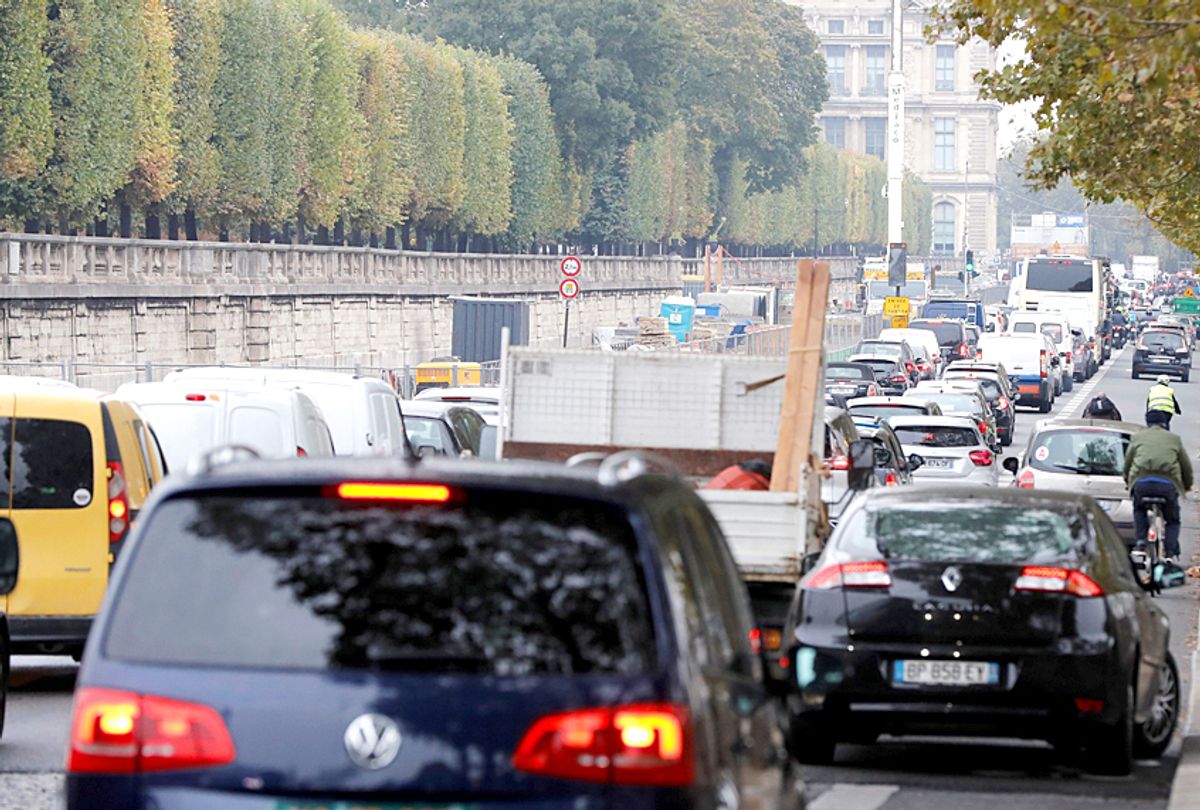 Cars and vehicles are caught in a traffic jam on the Quai des Tuileries in central Paris. (Getty/Francois Guillot)
--

In the race to reduce global carbon dioxide emissions that contribute to global warming, two cities are taking the lead.

China, the UK and France have all already committed to stop selling or producing fuel combustion cars by 2040 — a good start. On Thursday, France's capital city of Paris announced that it is trying to get to the finish line first by banning all gas-powered cars within its limits by 2030.

Initially, there were discussions aimed at achieving this change by 2024, when the city of 2.24 million hosts the Olympic games, but it is apparently giving itself some leeway time. Paris City Hall is shying away from the word "ban" because previous “no-car zones” policies have been controversial. Here, it is leaning into the language of a deadline for phasing out combustion vehicles instead, though there's no effective difference.

It should, of course, be noted that the city lends its name to the Paris Agreement, which aims to reduce global carbon emissions by implementing reduction processes and phasing out particularly harmful human causes for climate change starting in 2040. Famously, the Trump administration has tried to pull the United States out of the accord, drawing fire both domestically and internationally.

Coming up in the fast lane to pass Paris is the far smaller city of Oxford, England, which has committed to end the use of gas-powered cars in its city center by 2020. On Tuesday, Oxford officials announced a plan to introduce “zero emission zones” in the city center, banning combustion cars completely. Already, large sections and central streets in the city of 150,000 (with thousands more who commute into it every day) have been given over to bike and pedestrian traffic at most hours of the day.

London has a similar plan to implement “ultra-low emission zones,” charging a fee to cars with high gas usage since 2008. As well, Madrid, Mexico City and Athens aim to ban fuel combustion cars by 2025. Private companies are following suit; China-owned Swedish manufacturer Volvo will only sell electric or hybrid vehicles as early as 2019.

It's a strong showing, particularly considering that carbon from fossil fuel and industry account for 65 percent of the worldwide greenhouse gas emissions. Co2 contributes to climate change as a greenhouse gas that traps heat within the atmosphere, causing global temperatures to rise. Scientists predict the planet's temperature to rise 2 degrees by the end of the century, threatening the very existence of coastal cities and communities all over the world due to melted ice pack, as well as possibly triggering severe and dangerous changes to global weather patterns.

And, yet, with all this, the United States is still in park and possibly shifting into reverse. According to the Environmental Protection Agency, carbon dioxide emissions from the transportation industry in the United States accounted for about 27% of the total U.S. greenhouse gas emissions in 2015. The U.S. contributed 15% to global emissions from fossil fuel combustion and other industries in 2014.

Head of the Environmental Protection Agency Scott Pruitt finally came around to maybe talking about humanity's contribution to climate change last month. In October, however, it surfaced that he was regularly meeting with the heads of corporate interests that the EPA should be regulating and investing time into saving the coal industry, which could be impossible and, if not so, would also lead to damaging effects on the environment.