New Orleans can teach us about disaster response

As devastation from this year's storms continues to wrack the U.S., Louisiana remembers Katrina and its aftermath 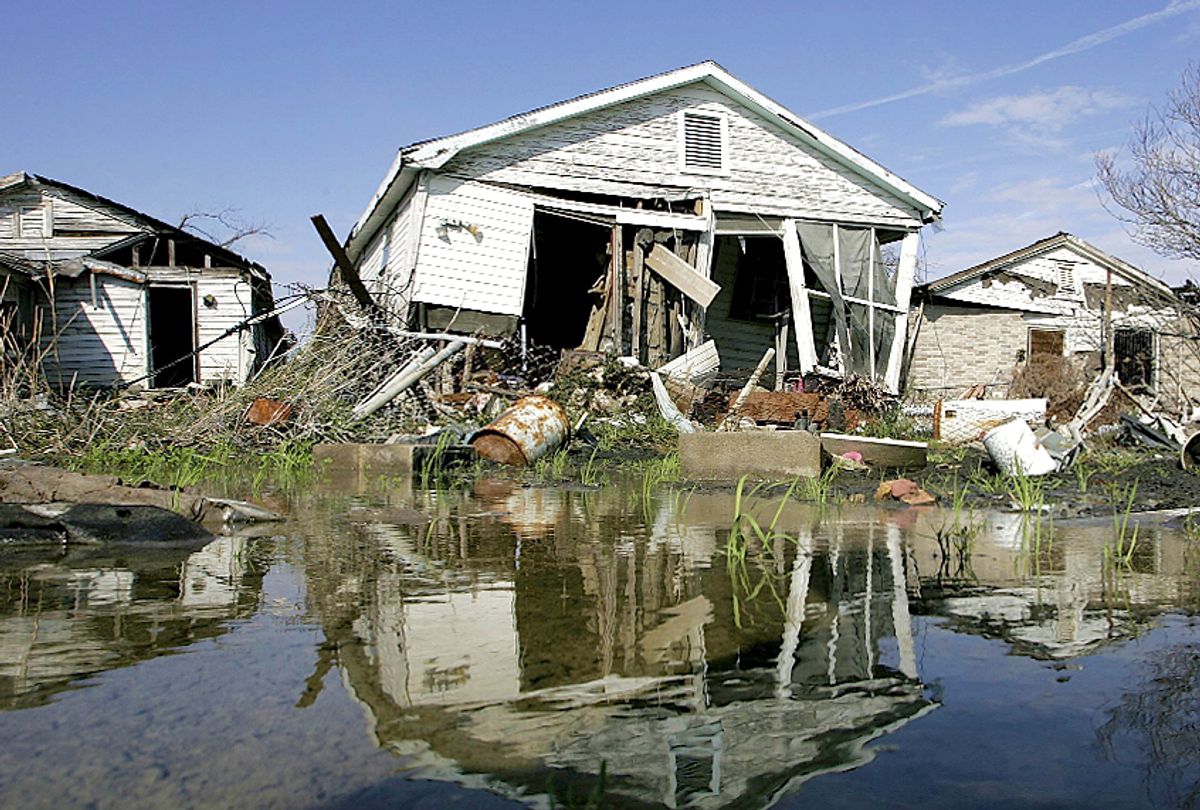 The storms are 12 years and many miles apart, but it's hard to ignore the parallels between Hurricanes Harvey, Irma and Maria to Hurricane Katrina. Or forget that Louisiana has yet to fully recover.

Houston will likely have a similar journey to recovery as New Orleans did after 2005. Within two days this August, Houston rain tripled the Katrina floodwater pumped out of New Orleans. The Crescent City contained less than 500,000 residents during its flood, while Houston has more than two million. Katrina was responsible for 1,833 deaths, and Texas and Florida’s tolls are each under 100 (albeit still counting). The grievous list goes on.

Maria, meanwhile, has ravaged Puerto Rico — and its population of 3.4 million American citizens. Some reports have been calling it “Trump’s Katrina” and criticizing the president for publicly denouncing NFL protests and rallying for his favorite Alabama GOP Senate primary candidate while the territory suffered. Channeling the near-hopelessness of 2005 New Orleans, San Juan Mayor Carmen Yulín Cruz told CBS News through tears last month that Puerto Rico was in a “humanitarian crisis,” as federal response tried but failed to rescue victims on time. The death toll will reportedly reach into the hundreds.

Earlier this storm season, as the U.S. saw the city of Houston suffer the greatest flood of its kind in recorded history, the state next door spent the anniversary of its own darkest hour bracing for Harvey’s next chapter as the storm, its unfathomable wrath unfinished, billowed eastward. President Donald Trump declared a state of emergency over several Louisiana parishes (making it easier for the state to get federal aid), with some areas under mandatory evacuation.

New Orleans in particular should continue to be anxious for approaching storms, because the city experienced a major flood infrastructure failure the first week of August, destroying buildings and vehicles across the city. Only afterward did residents learn that over a dozen pumps meant to drain water from the area were insufficiently powered, a disastrous and ill-timed failure of the government agency in charge.

While Louisiana Gov. John Bel Edwards (D) at the time said he was “not panicked” about New Orleans in particular, he predicted “the worst” was yet to come for his state. His ominous foresight came to life when Harvey touched Louisiana’s southwest. But the damage paled in comparison to Houston. New Orleans, which was not in Harvey’s path, was spared. Residents below sea level are stilling holding their breath as more storms rip through the Atlantic during this inordinately intense hurricane season.

The day Harvey came through, much of Louisiana’s thoughts revolved around aid to Houston. Local leaders state Sen. Norby Chabert, R-Houma, and state Sen. Dan Morrish, R-Jennings, were two of the countless veterans who could not help but see a mirror of Katrina in Harvey. But their opinions of Harvey’s political implications, from rising tides to President Donald Trump, were quintessentially Louisianian: calm, prayerful and jaded — they had seen it all before.

Both lawmakers were more concerned with witnessing a Katrina repeat, which they did not anticipate. Chabert lamented law enforcement’s tradition in flood-prone states of stopping laypeople from rescuing flood victims if those volunteers lacked documentation or proper preparation, which he said wasn’t seen in Texas, Chabert said, and won’t been seen going forward.

“Citizens should be allowed to save other citizens,” Chabert said.

Morrish, whose jurisdiction sits west of New Orleans and was the only one with a mandatory evacuation, remembers this himself. During Katrina, he said, residents of his area perfunctorily planned to boat through the New Orleans floodwaters to “pick people up,” but officials stopped them when they did not have fuel and water to sustain themselves. The now-famous Cajun Navy, which went from a loosely organized volunteer group to a lauded battalion of Southern saviors, is one example of that changing. “They’ve learned a lot from the lessons of Katrina,” Morrish said.

While Chabert agrees that federal natural disaster response has improved exponentially since Katrina, he believes it’s still “way too early” to discern whether Harvey has had better federal response than Katrina. “After the rain stops and the sunshine comes out . . . the social construct of the economy is destroyed,” Chabert said. “That doesn’t happen when the rain quits.” The government’s time to act, he said, comes in a disaster’s grueling after-effects, which lasts for months.

Federal aid has not been void. Trump temporarily lifted the Jones Act, which allowed more efficient maritime shipping from the mainland to Puerto Rico. (The waiver then expired earlier this month.)But those who stood on the front-lines of Katrina are having flashbacks watching federal response to Puerto Rico, which critics say has been too slow.

Morrish agrees with Chabert, and added that Harvey’s first response, which flooded America’s news feed the week of landfall, did not spotlight government, but rather local volunteers. “It’s about people,” he said.

Federal officials are aware of the standards they have to meet this time around, and weren’t afraid to acknowledge it. Federal Emergency Management Agency (FEMA) director Brock Long made clear that the temporary shelter in Houston’s convention center was “not the Superdome,” during a press conference with President Donald Trump and the First Lady. Long was referring to America’s haunting memory of New Orleans’ famous football stadium, where thousands of Katrina victims endured days without food and drinking water, despite local and federal government promises.

Chabert, who lived in New Orleans during Katrina, said the federal government should show it has learned from 2005 by adding men and women to the local human workforce, such as law enforcement and medical aid, and getting material resources to Harvey’s trail of victims. “You have no idea how difficult it is to get a gallon of water after a major hurricane,” Chabert said.

When in Texas, the president made clear he wanted federal response to be “better than ever before.” Looking forward to aid to Puerto Rico during the most recent storm, the president gave his administration an “A+” grade for handling Texas and Florida during Harvey and Irma, respectively. Puerto Rico is still unfolding, with supplies and aid still struggling to make it overseas. The lessons learned from Katrina shone through for mainland states, critics say, but have yet to translate to Puerto Rico.

Many Louisianans still ascribe failing grades to federal response to their own floods last year, and are waiting to see how the response-oriented months following their neighbor states’ and territories’ disasters will look. “If the federal response [within a few days of the storm] is not robust, then this administration will be no better than the last one that handled a major flood event,” Chabert said.