When "liberal" men mistreat women: It's not just Harvey

Harvey Weinstein certainly claimed to be a liberal and a supporter of feminism. That speaks to a deeper issue 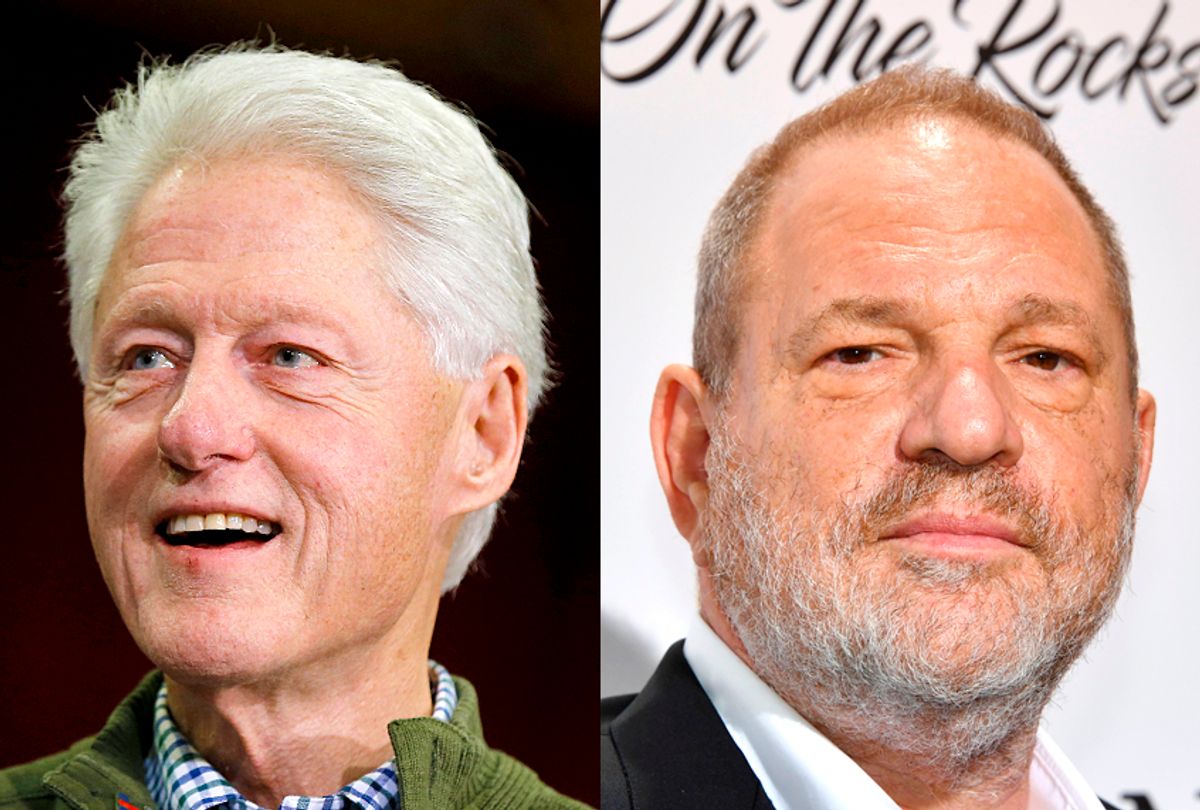 We've heard the words "phony liberal" tossed around a lot throughout the years. Most recently, during the 2016 presidential election, we heard Bernie Sanders supporters use that phrase against backers of Hillary Clinton (and sometimes vice versa).

Yet if there is one example of a phony liberal that no one can dispute, it would be Harvey Weinstein.

Just take a look at this recent passage from the Washington Post:

For technical reasons, I need to acknowledge that everyone is innocent until proven guilty and we don't know Weinstein's side of the story. But to this point, at least 32 women have come forward and accused him of predatory behavior or worse — including names most of us will recognize, like Rose McGowan, Angelina Jolie and Gwyneth Paltrow. Yes, there are sometimes false accusations of rape or sexual assault, but it beggars belief that so many women could be lying, misremembering or misinterpreting a clumsy come-on.

There has been a lot written about toxic masculinity and rape culture, about our society's dehumanization of women and the propensity of powerful men, in show business or any other field, to believe they can get away with "grabbing them by the pussy," so to speak. Far more qualified writers than myself are tackling these subjects now, as many of them have done before Weinstein and (lamentably) many more will likely need to do when some future scandal breaks.

One aspect of this issue that needs to be addressed, though, is just how a liberal like Weinstein can on the one hand profess a strong belief in women's rights while at the same time behaving like an apparent sexual predator.

If you've ever told a lie and felt uncomfortable because you see yourself as scrupulously honest, then you've experienced cognitive dissonance. It occurs when your ideas, beliefs, or behaviors contradict each other ...

While Weinstein is an example of an extreme case of cognitive dissonance — the gender equivalent of an advocate of racial equality who secretly belonged to the Klan — he is still symptomatic of a larger problem.

As an undergraduate student at Bard College in the mid-2000s — when that school was widely regarded as one of the most progressive in the country — I would regularly see men who preached feminist values by day act like creeps ... or worse.

During the 2016 election, the term "Bernie Bro" was coined to describe Sanders supporters who used sexist rhetoric against Hillary Clinton and her fans even as they embraced one of the most left-wing presidential candidates in modern history. I'm not saying that most Sanders supporters fell into this category — but even a few is far too many.

Not to say that the Clinton campaign was blameless either. While many of her supporters were reluctant to admit it, the numerous accusations of predatory behavior against Bill Clinton were an albatross around Hillary's neck — and deservedly so. It's one thing to say that Hillary shouldn't be blamed for what Bill does when she isn't around, but it's entirely fair to observe that she stood by him and defended him despite those allegations. There is a brazen hypocrisy in stating, on the one hand, that the women accusing Trump should be believed (which they should) while implying that it was OK for the Democratic nominee's spouse to engage in comparable behavior with no consequences.

Before any Trump supporters who may have wandered into this article begin to crow in triumph, allow me to remind you of one of the president's more infamous quotes:

I moved on her like a bitch. But I couldn’t get there. And she was married. Then all of a sudden I see her, she’s now got the big phony tits and everything. She’s totally changed her look … Yeah, that’s her. With the gold. I better use some Tic Tacs just in case I start kissing her. You know, I’m automatically attracted to beautiful — I just start kissing them. It’s like a magnet. Just kiss. I don’t even wait. And when you’re a star, they let you do it. You can do anything … Grab ’em by the pussy. You can do anything.

I think it's fair to say that almost every single person who voted for Trump knew that he had bragged about using his celebrity to sexually assault women. They knew that more than a dozen women had accused him of predatory behavior at various times, with many of their stories strongly indicating that his comments in the "Access Hollywood" recording were more than idle braggadocio.

As for liberals, we need to acknowledge that simply saying the right words or donating the right checks means nothing if you allow cognitive dissonance to distance you from your own behavior. This shouldn't be limited to women's rights either. If you're a self-professed economic egalitarian who mistreats people that make less money than you, or a Black Lives Matter who instinctively crosses the street when you see an African-American man walking toward you, or a Trump critic who exploits undocumented immigrants for profit -- in short, if your personal behavior would embarrass you in public, then you too are a phony liberal. We don't need more of those.