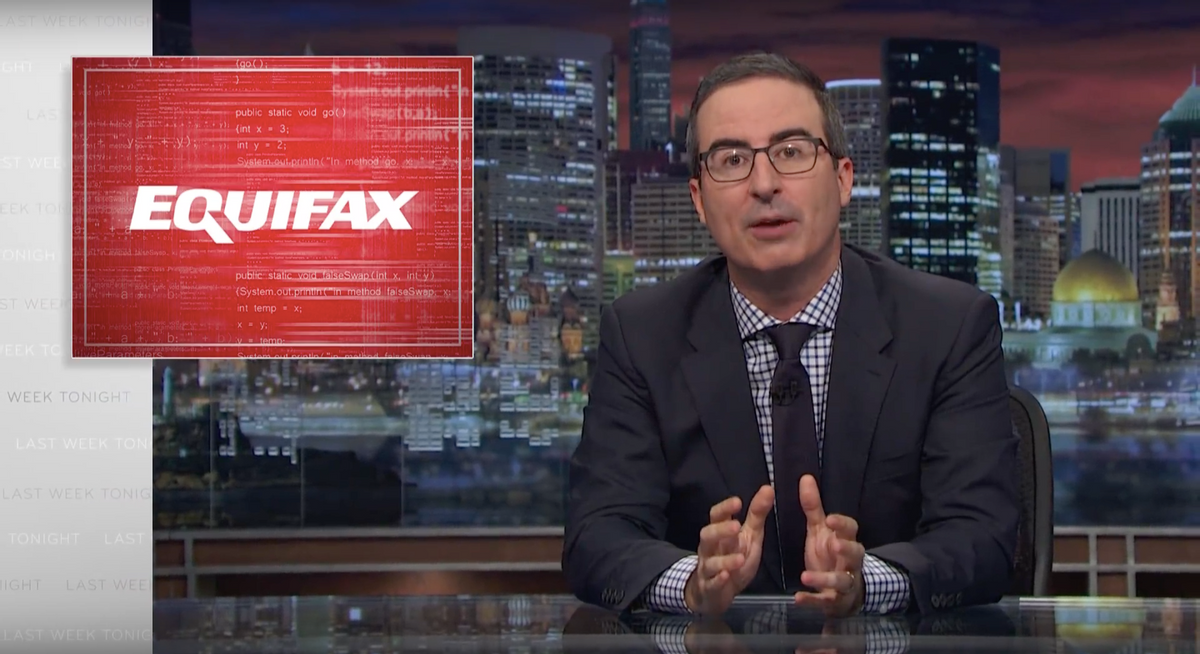 "Last Week Tonight" host John Oliver hacked into the massive data breach at Equifax on Sunday, a cyber theft in which some 145 million Americans had their private information stolen.

"This isn't Target exposing customers' credit cards," Oliver noted in his monologue, "This is compromising Social Security numbers, the things that thieves could use to open new credit cards in your name, and if your information was stolen — which, remember, is about a 50-50 chance — it could haunt you forever."

“It’s one of those things that looks suspicious whether or not you’re doing something wrong,” he said. “It’s like walking into a petting zoo with a bib on.”

The first thing you should do is freeze your credit with Equifax, Experian, and TransUnion, Oliver said. "That way, no one can access it, including you, until you unfreeze it." To add insult to injury, Equifax is poised to make millions off its own data breach because this may cost some money.

“Because they make most of their money selling our data to businesses, like banks. So in their eyes, we’re not the consumer, we’re the product. To think of it in terms of KFC, we’re n

ot the guy being the 10-piece buckets, we’re the fucking chickens.”

To make matters worse, Equifax was hired by the Social Security Administration a year ago on a $10 million contract to “help the SSA manage risk and mitigate fraud for the mySocialSecurity system, a personalized portal for customers to access some of SSA’s services such as the online statement.”

Sherrod Brown, D-Ohio, the ranking minority member of the Senate Finance Committee’s subcommittee on Social Security and pensions, said of the contract:

The Social Security Administration’s partnership with Equifax raises serious questions about the security of Americans’ most sensitive information, and they owe the American people answers immediately. We need to know whether Social Security data is vulnerable to cybercriminals, and I intend to find out exactly what’s being done to ensure every single American is protected.

Richard Forno, a graduate program director of cybersecurity at the University of Maryland, said that that breach "signals that these data breaches will continue until society as a whole (industry, government and individual users) is able to objectively assess and improve cybersecurity procedures."

Equifax's stock price ended Friday at 109.50, down more than 23 points from when the hack was announced Sept. 7, Atlanta Business Chronicle reported. However, that number is up from the company's low of 92.98 on Sept. 15.