Are Democrats in for a rude awakening in Virginia?

Virginia's Democratic gubernatorial nominee should be far ahead. So why is Obama stumping for him? 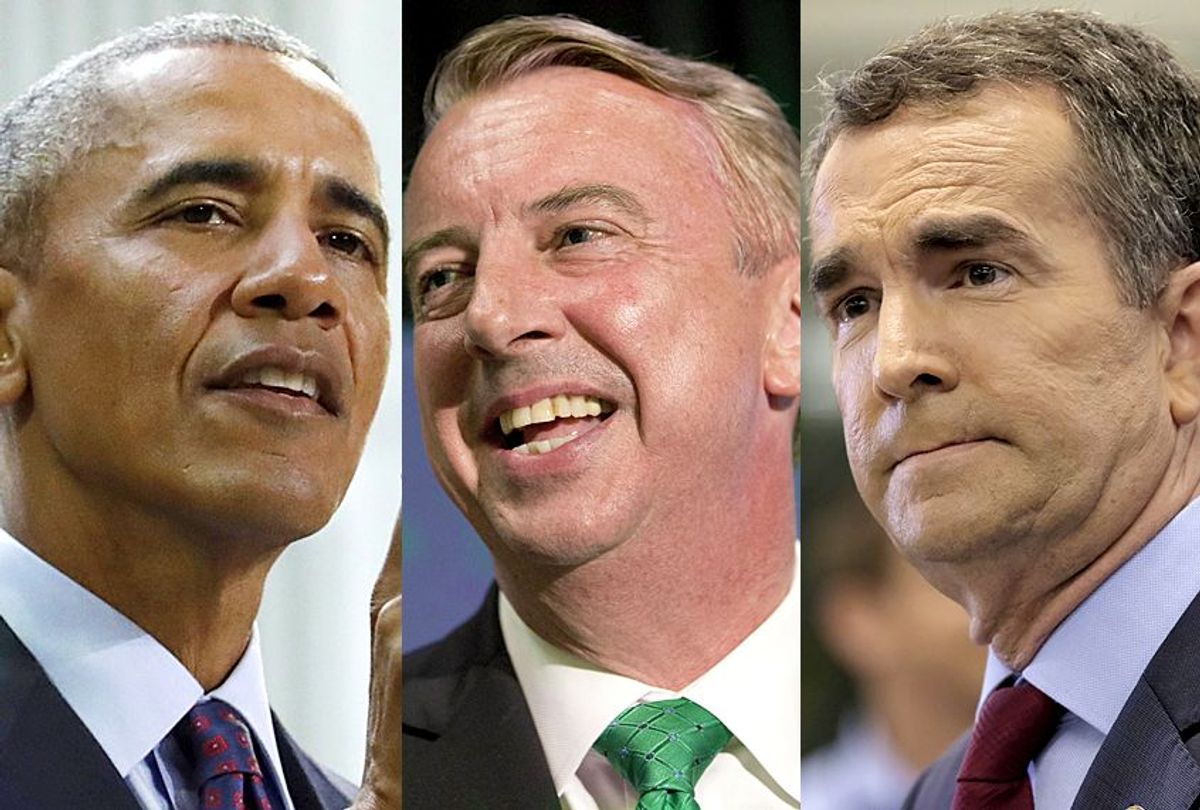 While the Democratic Party would seem to have an edge in the Virginia governor election, lukewarm poll numbers and the presence of President Barack Obama campaigning there suggest a Republican upset may still be possible.

Three polls, taken over the past week, offer wildly different results: The Quinnipiac University poll had Democrat Ralph Northam ahead of Republican Ed Gillespie by 14 points. A Fox News poll had Northam ahead by only 7 points. And a Monmouth poll had Gillespie in the lead by 1 point.

"People sometimes think of Virginia as a blue state or a Democratic-leaning state, and it's true that it's gone from a state that routinely voted Republican on the federal level to one that's a little more Democratic than the rest of the nation, but not overwhelmingly so," Kyle Kondik, the director of communications at the University of Virginia Center for Politics, told Salon. "And the off-year electorate is smaller than the presidential electorate, which is true of any state, but it's also an older and less diverse electorate, which demographically tends to be more Republican. So I think this is going to be a relatively close race."

But a Democratic candidate should still have an advantage right now. Trump lost Virginia to Clinton by 5 points in the 2016 presidential election. Northam is outperforming Gillespie in both fundraising and TV advertising. And, with the exception of the 2013 contest, the party in control of the White House has lost the Virginia governor's race in every election since the 1970s.

Turnout can be unreliable for Democrats, which could offset all of these advantages. Although Democratic turnout surpassed Republican turnout in the 2008, 2012, 2013 and 2016 elections — all of which were years in which Democrats won on either the presidential or gubernatorial levels — it was either below or even with Republican turnout in 2006, 2009 and 2014.

As one expert told Salon, this could very easily explain why Obama has been brought into the state.

"The importance of the election itself, the gravity of the election, on a national basis makes this a venue that you'd want to bring out your heavy artillery, even if you felt that the race was safe," Russell Riley, co-chair of the Miller Center’s Presidential Oral History Program at the University of Virginia, told Salon. "Because everybody will be paying attention here as a sort of off-year election, Virginia tends to draw more attention because people are trying to read national trends. And I think that is largely what is at issue."

It also hurts Democrats that, while Northam is widely regarded as an uncharismatic candidate (as Riley pointed out), Gillespie seems to have struck on far right issues that have proved very popular for Republican politicians in the past.

"Gillespie has tried to make it a law-and-order election and stressing cultural conservatism on certain issues. He's been to the right of Northam on the Confederate statues issue and on the so-called 'sanctuary cities' issue," Kondik told Salon.

He added, "Democrats argue that the ads that Gillespie has run are racially insensitive and, whether that's true or not, those things can still be effective. And it is possible that Gillespie's focus on illegal immigration and [the street gang] MS-13 has made this into more of a law and order election and potentially has helped him against Northam."