A rundown of the Kelly-Trump-Sanders-Wilson phone call scandal

An ISIS attack in Niger, a general libeling a congresswoman, a heartless phone call from Trump. What is going on? 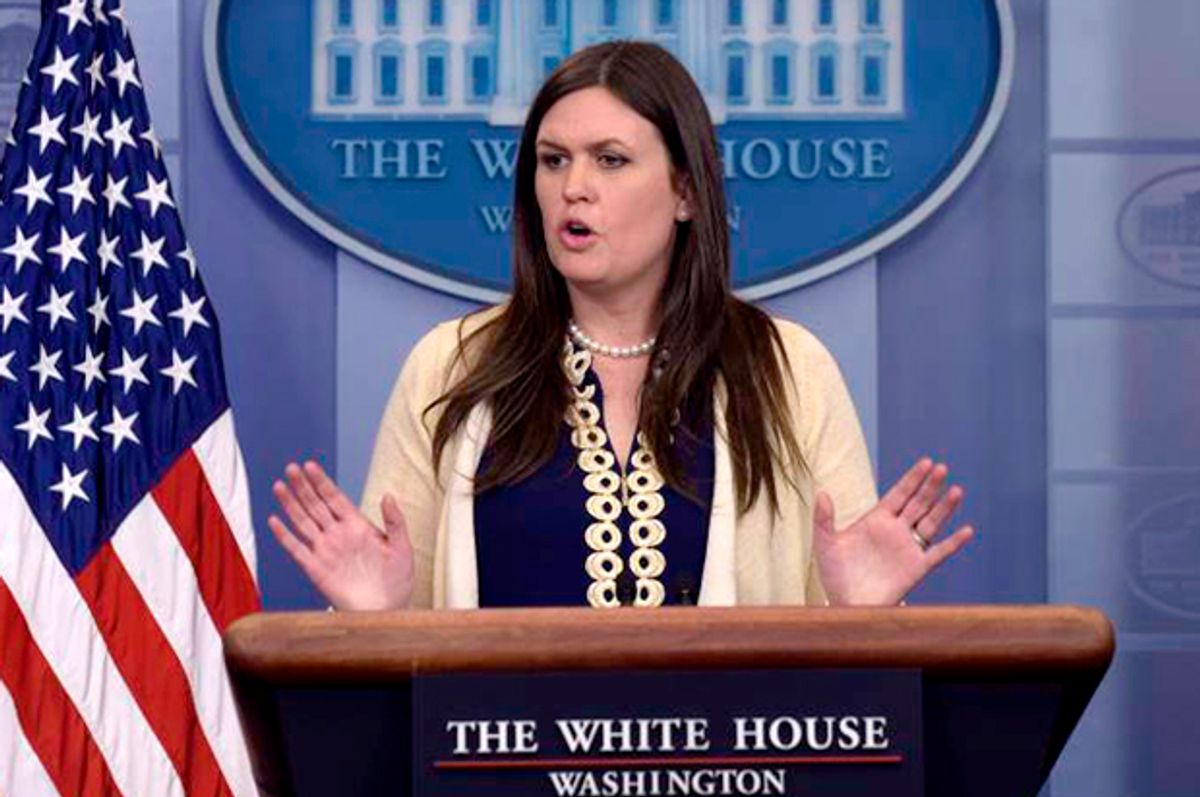 White House Press Secretary Sarah Huckabee Sanders spent Friday afternoon's press briefing playing defense, sparring with frustrated reporters questioning the facts around President Trump’s consolation — or lack thereof — of the family of late Sergeant La David Johnson. Most egregiously, when reporters asked Sanders about John Kelly — who had lied about the contents of a speech given by congresswoman Frederica Wilson in an attempt to discredit her— Sanders brushed off their questions. Her reasoning? Any criticism of “a four-star marine general" would be “highly inappropriate.”

Thus ended a whirlwind 48-hour period of back-and-forth that showed the White House's penchant for making grand accusations — which often contradict public knowledge — that conveniently happen off-camera in front of witnesses unknown. But how did we get here, you ask? Strap in, folks.

The call that started it all

It began with (what should have been) a routine phone call to the family of deceased Sergeant La David Johnson, a call that any capable leader could have carried out with dignity and respect. Sgt. Johnson was one of four U.S. soldiers killed in Niger during an ISIS ambush on October 4th, 2017 — an operation has been called “Trump’s Benghazi” by many, including Representative Frederica Wilson (D - Fl.). The Department of Defense formally launched an investigation into the ambush on Tuesday of this week. By the time the bodies of the fallen soldiers were on U.S. soil, Trump was already under fire for failing to call the families of the deceased. When questioned about it by reporters, Trump retorted that former President Obama never called families of fallen troops during his time in office (which was patently untrue).

that's a fucking lie. to say president obama (or past presidents) didn't call the family members of soldiers KIA - he's a deranged animal.

Stop the damn lying - you’re the President. I went to Dover AFB with 44 and saw him comfort the families of both the fallen military & DEA. pic.twitter.com/HhE4KbTBkJ

In the same Rose Garden news conference, Trump said, “I will, at some point, during the period of time, call the parents and the families, because I have done that, traditionally.”

Finally, Trump made the phone call heard round the world. On Tuesday of this week, Trump attempted to console Sgt. Johnson’s pregnant widow, Myeshia Johnson. But according to Representative Frederica Wilson (D-Florida), who was in the car with Johnson at the time, Trump’s consolation was anything but. Trump told Ms. Johnson, “[her husband] knew what he signed up for ... but when it happens, it hurts anyway.”

After Sgt. Johnson’s mother confirmed Rep. Wilson's claims — and further stated that Trump “did disrespect my son and my daughter, and also me and my husband” — eyes turned to the congresswoman, whom Trump has fervently accused of lying (and unjustly “listening in”), with “proof” to match.

Democrat Congresswoman totally fabricated what I said to the wife of a soldier who died in action (and I have proof). Sad!

When Wilson came forward with claims of what Trump had said, she set off a national firestorm. Not only had Trump allegedly said “he knew what he signed up for,” but according to Wilson, “He never said his name because he did not know his name. So he kept saying, ‘Your guy. Your guy. Your guy.’ And that was devastating to [Ms. Johnson].”

In a meeting later on Wednesday, Trump told a room of senators, “I didn’t say what that congresswoman said. Didn’t say it at all, she knows it.” Sanders echoed this sentiment in a press briefing, telling reporters, “to try to create something from that, that the congresswoman is doing, is frankly appalling and disgusting.”

Since being accused of “fabricating” the phone call, Wilson has called Trump “a liar,” telling Politico that four other witnesses were in the car at the time, the phone being on speaker.

Proof or no proof?

Trump alleges he has some form of proof to back up his version of events, though he neither specified in what form it came, nor if he would release it. However, Sanders later said that a tape of the call did not exist. To emend Trump’s faux pas, Sanders then claimed General Kelly was among some White House administrators on the call with Trump and Ms. Johnson. Perhaps, Trump conflated having witnesses with a concrete form of evidence such as a recording. Later, Trump then went back on what Sanders had said, telling reporters, “let her make her statement again and then you’ll find out."

To confuse matters further, Lara Trump, the president’s daughter-in-law, contradicted Sanders and said that transcripts do, in fact, exist. Once again, Sanders did damage control and told reporters in a Friday press briefing that no such transcript exists as Lara Trump described.

General Kelly made a seemingly unrehearsed and emotionally charged speech at Thursday’s daily press briefing to defend Trump and lash out at Rep. Wilson for publicizing the call. “It stuns me that a member of Congress would have listened in on that conversation — absolutely stuns me,” Kelly said.

Rather than knowing “what he signed up for,” Kelly says Trump talked about Sgt. Johnson doing what he loved and what he wanted to do. “That’s what the President tried to say to four families the other day,” Kelly said.

Kelly then turned the conversation to Wilson, calling her an “empty barrel making the most noise.” From there, Kelly told an anecdote about Rep. Wilson in an attempt to paint her in a negative light.

Kelly homed in on a 2015 speech that Rep. Wilson had given at the dedication of a new FBI building that was dedicated to two slain FBI agents. Politifact quoted General Kelly as claiming that Wilson

"stood up there ... and talked about how she was instrumental in getting the funding for that building, and how she took care of her constituents because she got the money, and she just called up President Obama, and on that phone call he gave the money -- the $20 million -- to build the building. And she sat down."

Kelly believed that this speech illustrated Wilson’s lack of respect for fallen soldiers and agents. “We were stunned — stunned that she’d done it,” Kelly remarked. “Even for someone that is that empty a barrel, we were stunned.”

But a video of the dedication ceremony later uncovered shows Kelly misrepresented Rep. Wilson’s speech. Though Wilson did take credit for “securing approval of the naming of the building," she spent much of her speech praising the FBI agents slain in the line of duty.

Before this incident, Kelly's son had become something of a political football: Trump claimed Obama had not called Kelly when his son, Second Lt. Robert Kelly, was killed in Afghanistan in 2010. General Kelly did not comment on the matter during the press briefing.

Playing the blame game at a Friday debate

Friday afternoon's White House press briefing came of as more of a defensive who-said-what brawl than a normal Q&A, echoing the days of Sean Spicer's tenure as press secretary. It has thus far been easy for the White House to go up against a Democratic congresswoman (and a woman of color inherently critical of Trump) and treat her as their political enemy; many Trump devotees have fallen in line to attack Wilson. More challenging for the Trump machine, however, has been the task of debunking and delegitimizing comments made by Sgt. Johnson’s mourning family. When Press Secretary Sanders was asked why the Johnson family said Trump’s comments were “disrespectful,” Sanders turned the blame back on them, and said Trump’s comments were being misrepresented and mischaracterized.

“Certainly if the spirit of which those comments were intended were misunderstood, but as the president has said, as General Kelly has said — who I think has a very deep understanding of what that individual would be going through — his comments were very sympathetic,” Sanders remarked. “That was the spirit in which the president intended them. If that was taken the other way, that’s certainly an unfortunate thing.”

Continuing to point fingers, Sanders brought to the defense that Trump’s Twitter fingers were an answer to the press, the only ones “talking about it a lot.”

Diverting attention from “the issue at hand”

The White House has dogmatically insisted that President Trump’s heart was in the right place, that the spirit of his comments had respectful and admirable intent. All the while, the controversy surrounding the ambush in Niger itself remains a mystery. Sanders continued to ward off questions about Niger, and said that the investigation simply cannot be discussed in detail.

Yet perhaps the public’s attention is misdirected. Yes, Trump’s attempts to deflect and redirect criticism are egregious. But The Atlantic’s David A. Graham argues that the entirety of the phone call controversy — from failing to reach out, to Obama, to Wilson — has been a grand diversion from what started it all.

Why were the soldiers in Niger, and why hadn’t he spoken about it sooner? This is a pattern with Trump, in which he manages to say something so inflammatory, or so untrue, or both, that it obscures the central question…The broader question, of what the soldiers who were killed were doing and what went wrong, remains unaddressed by the president, and Trump’s jab at other presidents may, unfortunately, help to keep it that way.

The elusive manner in which Sanders has discussed Niger, and Trump’s damn near failure to do so, makes one thing clear: Niger was an accident waiting to happen, and we need answers. Trump can manipulate the media into focusing on PhoneCallGate, but the public is waiting.