The (Boy) Scout I never was

Before I knew I was transgender, there was the scouting experience I longed for and couldn't have 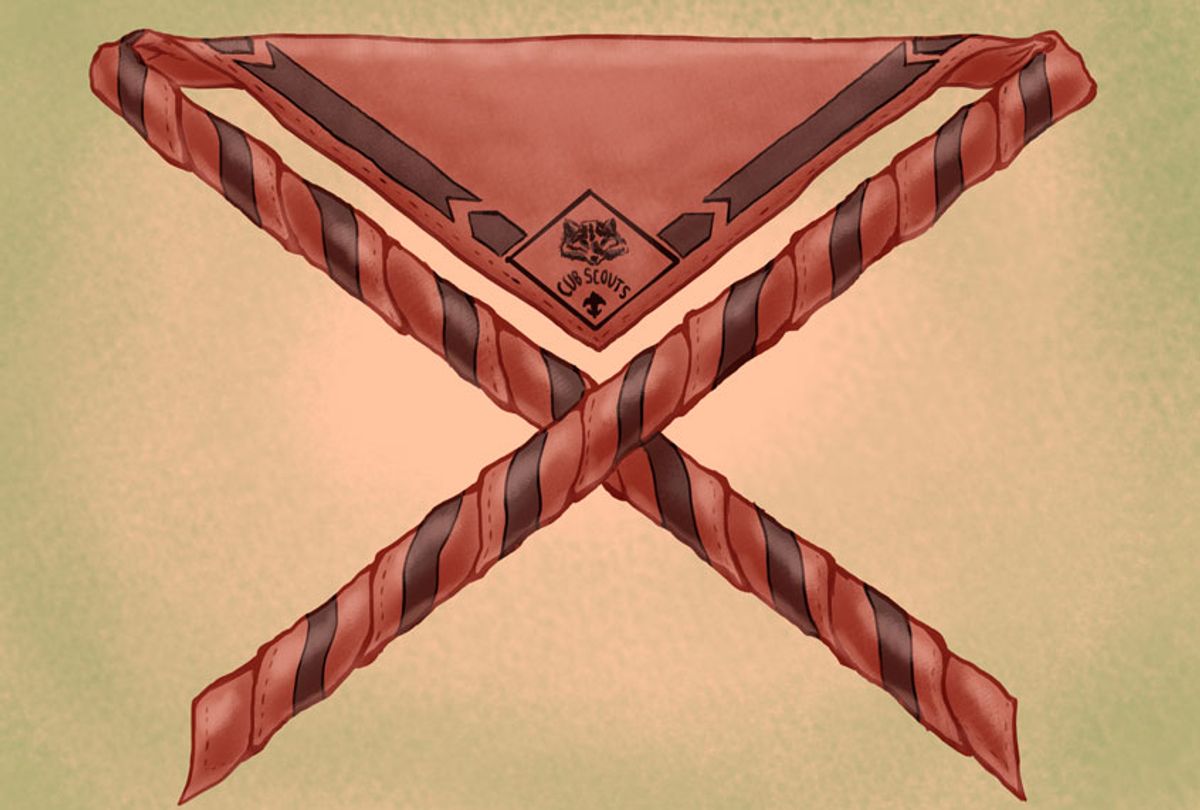 If you had asked me to boil gender down to its marrowy essence when I was in elementary school back in the '80s, I probably would have said Thursdays. Thursdays, when Cub Scouts and Girl Scouts came to school in their uniforms and at three o’clock went to their den meetings. Thursdays, when I stood in line at the cafeteria, waiting to get my carton of milk, and eyed the badges and emblems and bits of string that adorned the blue and gold shirt of my friend Bryan. I really, really wanted epaulets. I wanted the belt with its shiny square buckle. I wanted even the stupid neckerchief, held together with a wolf-adorned slide just below where his Adam’s apple would one day bob. What I didn’t want was the stupid green sash of the Girl Scouts, which made them look as if they’d been rejected from Miss America and settled for some second-rate pageant. I didn’t want the starchy skirt that flared out around the knees and meant you shouldn’t dangle from the monkey bars or climb up to the top of the jungle gym.

I was among the many at my elementary school who were neither a Boy Scout nor a Girl Scout. For some, I’m sure, money was a factor — those neckerchiefs weren’t cheap. For others, it was one more meeting that their parents would have to schlep them to and from, a hassle that couldn’t be accommodated. Maybe some kids weren’t actually interested. My family had a more intricate ambivalence.

As a child, I didn’t understand it. We spent lots of time hiking, camping, gardening and canoeing. My brother and I learned to shoot guns (and bows and arrows) when we were young; it was a task that my father ranked next to splitting wood as something any human should be able to do. On paper, he seemed to hold a lot in common with the ideals of scouting, but he openly scoffed at it.

Now, I think I get it. Both my parents were involved in the Vietnam War protests, both of them had a hearty skepticism towards the military-industrial complex, and both of them viewed the Scouts as part of the supply chain of that complex.

All that said, at some point my brother whined and wheedled and pleaded his way into the Cub Scouts. I think he was around eight and all of his friends belonged and could he please, please join? My parents relented and permitted him to go to a meeting after school. I waited for him at home, ready to curl up with jealousy at the sight of his neckerchief. But when he arrived home, it was without a uniform and with a split lip and a black eye. It had taken all of ten minutes before a fight had broken out — a fight in which, my brother assured me, he had gotten the best of the other boys. He never went back for another meeting. (I was almost as jealous of the black eye as I would have been of the uniform.)

My parents probably would have let me join Girl Scouts if I’d asked to. But my friends at school had told me enough about what the Girl Scouts did to make me feel certain that I knew it all and didn’t really care. My mother ran a parallel curriculum to my father’s gun-shooting and wood-chopping (though my brother didn’t partake in her instruction) in which I learned to sew and iron and bake and cook and wax the kitchen floor. From what I could tell, this was mostly what the Girl Scouts did, only in larger, gigglier groups. No, thanks.

So I watched scouting from afar. From across the cafeteria table, I read the patches on Bryan’s uniform and checked them off against an internal list: I could make a fire, I could use an ax, I had no idea how to tie any knot other than in shoelaces. He traded the blue and gold of the Cub Scouts for the khaki and green of the Boy Scouts, and my jealousy burned brighter. I wanted a uniform. Even now, this yearning for a uniform persists in some weird way and is deeply tied to gender for me. Uniforms are the great mask, the best disguise, the ultimate in masculine gender presentation.

By high school, scouting and I had gone our separate ways. At the boarding school I attended, I joined the “Outing Club” (not as gay as it sounds) and went hiking and camping and canoeing. Thursdays no longer meant an influx of uniforms at the lunch table, and the one boy who talked about his Eagle Scout project was something of a pariah. It was here, at this school, that I came out, first as a lesbian and then as transgender. It was here, at this school, that I began living as a boy. (This process involved a uniform of sorts – at the time, boys still had a strict dress code of coat and tie they had to wear to class, while girls had no dress code at all. So, when I came out, I traded my flannel shirts for a navy blue blazer, white Oxford shirt and striped tie . . . it wasn’t a neckerchief but it was close.)

Oddly, it was coming out as transgender that brought me back in contact with the Scouts. When I turned 18 (by that time I had been out as transgender for a year), I went to Probate Court in Maine to legally change my name from Alice to Alex. The judge was skeptical; he had a lot of questions about who I was and why I wanted to change my name. He reminded me repeatedly that male impersonation was a crime in Maine. He asked me what I intended to do with my new name. This question baffled me. What does one do with a name? I intended to live my life. This was not an adequate answer. Eventually, he supplied more specific instructions: If he was going to grant this name change, I had to agree to certain conditions. Principally, I could not use my name to gain access to institutions or clubs that were intended for men only. As examples of what I should not do, he said that I shouldn’t apply to the Citadel. And I should not try to join the Boy Scouts.

I hadn’t, since coming out, thought about any such action. In fact, I had avoided all-boy spaces — they made me feel less safe; when I was with all boys, I felt the most vulnerable, the most likely to be detected as not really a boy. But when the judge mentioned the Boy Scouts, I felt a surge of something — hope, desire, that not-quite-gone jealousy. But I solemnly promised the judge that I would not try and join the Scouts.

Even amid the coverage that makes it clear that these policies are meant to be public relations measures or are intended to help a financially faltering organization, I felt and feel a sort of hope, a relief at the idea of acceptance, an optimism that institutions can change, that progress is being made.

And then I catch myself.

In short, I find myself thinking about patriarchy and misogyny.

This is a topic I have often faced as a transgender guy. It started when I first came out, in the responses from my lesbian friends, particularly the butch lesbians. They wanted to know why I couldn’t “hack it” as a woman, why I had to take the “easy route” and be a man. And even after we got over these stumbling blocks, after long conversations about the difference between gender identity and sexual orientation, they would still insist that I was getting access to male privilege, that it was easier to be a transgender guy than a lesbian. They were and are right about the access and privilege; they were and are wrong that this was why I “decided” to live as a trans guy.

And I felt it even more from the cisgender, straight people I came out to. I’ve had so many people, especially straight, cisgender men, say I understand why you’d want to live as a guy. But the other way around? That’s just weird. In short, within our patriarchal society my transition makes sense. What I’ve done is a “step up.” What girl doesn’t, on some level, want to be a boy? Or rather, what girl doesn’t want what boys have – if not the body, then at least the power, the freedom, the independence.

That’s what I feel is at the heart of this move from the Boy Scouts. It isn’t about acceptance or changing gender norms. And it is certainly not about equality. It’s about the fact that, long after we have supposedly jettisoned the idea that women are just imperfect men, we still hold a deep belief that boys have it better.