The unhealthiest county in America voted overwhelmingly for Trump, who will only make things worse

The painful truth of how people vote 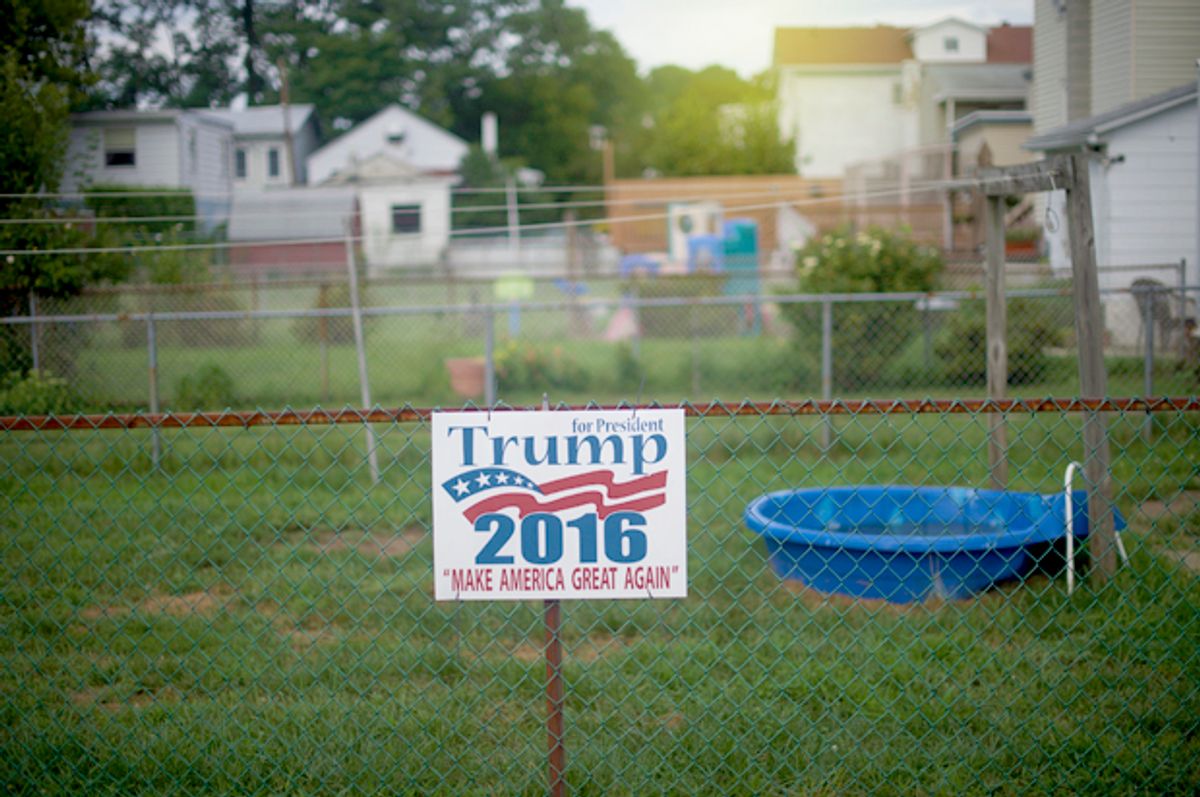 By nearly every measure, Union County, Florida, is the unhealthiest place in the United States. A Business Insider data analysis finds that the county outpaces the rest of the U.S. in deaths caused by “cancers, HIV/AIDS and tuberculosis, malignant skin melanoma, and nonmelanoma skin cancer”; that it has “the highest [U.S.] death rate overall”; and that life expectancy is just 68 in a country where the national average is nearly 79.

The median annual income, at just $39,163, is almost $20,000 less than the national average, and one-fifth of Union County residents live under the poverty line. Heroin is now the main cause of accidental death, and a new program has been launched to “reverse the growing trend of heroin and opioid abuse in the area.” The situation is not helped by the fact that those who occupy the county’s 12 small towns are edging toward midlife, with an average age of 40.

With its soaring death rates, widespread illness, out-of-control drug abuse, and high rates of unemployment, Union County is in desperate need of a turnaround, including more social services, funding, and development — a longshot with any administration in power. The county is also 74 percent white. And perhaps unsurprisingly, in the 2016 presidential election, its citizens voted overwhelmingly for Donald Trump by a staggering 80.2 percent.

To be clear, Trump won every faction of white voters, from the uneducated to the college educated, rich and poor, across gender lines. Those voting patterns say less about Trump than about white receptivity to a sales pitch steeped in racism and xenophobia. Despite Trump’s pan-white socioeconomic appeal, Union County is the kind of place news editors persist in falsely pinpointing as the loci for Trump support. It’s a power move, really; a way of punching down to avoid holding their own class accountable for voting with white supremacy as a primary, though more quietly spoken, motivator. The difference between Trump votes cast by residents of Union County and those from white America’s upper classes is that for the former, the decision will be far more consequential. Nine months in, there is already proof the result is an even greater imbalance of life and death.

Like so other many poor counties, Union County has been in decline for years. Local NPR affiliate WUFT recalls that the county’s once-thriving industry, clothing manufacturing, shut down in the mid-1990s, and others have slowed to a standstill. The only careers to be had are in the school system, sawmill, or local prison, which also houses one-third of the population. The most bustling street in the area’s biggest city is described by WUFT as “lined with convenience stores, churches and local businesses ... in rundown buildings.” The county has ranked last in health and wellness in Florida since 2010.

One of the few areas where Union County has had good news in recent years is in health care. Back in 2008-2009, nearly a quarter of residents had no health insurance, according to a 2012 Health Department assessment. By 2015, that number had dropped to 10.9 percent, and “like the state of Florida as a whole, the percentage of uninsured individuals [was] the lowest it has been since the passage of the Patient Protection and Affordable Care Act in 2009.”

The numbers of uninsured are guaranteed to go up under Trump, for a mix of reasons sociologists and researchers are still grappling with. In attempting to explain middle-aged, working-class whites' climbing death rates in this country — mostly due to self-harming behaviors — Princeton researchers Anne Case and Angus Deaton have blamed depression, hopelessness and bitterness tied to eroding faith in the promise of America’s future. “[They] have lost the narrative of their lives,” Deaton told Vox last year, “meaning something like a loss of hope, a loss of expectations of progress.”

In other words, high rates of blue-collar whites are self-medicating — one-fifth of Union County residents smoke, 37 percent are obese and 20 percent report drinking excessively — to dull the painful feeling that they have less to live for than ever before. And yet, they have voted to hasten their end by electing a man who will take their health care away and do nothing to reopen those manufacturing plants. They have signed on to a party whose mission is to create a scarcity economy that makes the rich richer, while the rest fight for scraps. This somehow creates a bottom tier delusion of prosperity, as long as someone else is being left behind.

It seems probable that if things get worse in Union County, which a Trump presidency guarantees, its citizens will grow more desperate, their self-destructiveness will increase and their outcomes will grow worse. The fierceness with which Trump’s base supports him suggests they may dig in their heels even deeper. Their vulnerability may yet ripen for further exploitation and their anger will be more misplaced. Union County’s hopes rest on a younger generation that will offset some of the death that currently plagues the area, but it’s hard to predict the mess it will be in after this administration is through with it.

During the campaign, Trump suggested African Americans should vote for him because, “what the hell do you have to lose?” The implication was that black folks’ lives were already so pain-filled and pathetic, and their futures so bleak, the answer was clearly “nothing.” Union County heard those Trumpian pronouncements, and though not seeing themselves as the intended audience, acted on them. Seeking an unrealistic form of change, and vengeance against made-up scapegoats instead of the system that has truly left them behind, probably feels good before it hurts.

But I have to wonder: What will happen with these down-at-the-heels towns as fear makes them cling tighter to the very forces that have been screwing them over from the beginning? How immense will be the runoff of trauma (however self-inflicted, in part), and how can it be treated? How do you help people who only grow more attached to their abusers? I’m really asking, though I'm petrified of the answer, because the ripple effects will impact all of us.