Steve Bannon says Milo Yiannopoulos is "dead to me," but is he?

The "alt-right" celebrities sever ties over overt Nazism, but their links persist 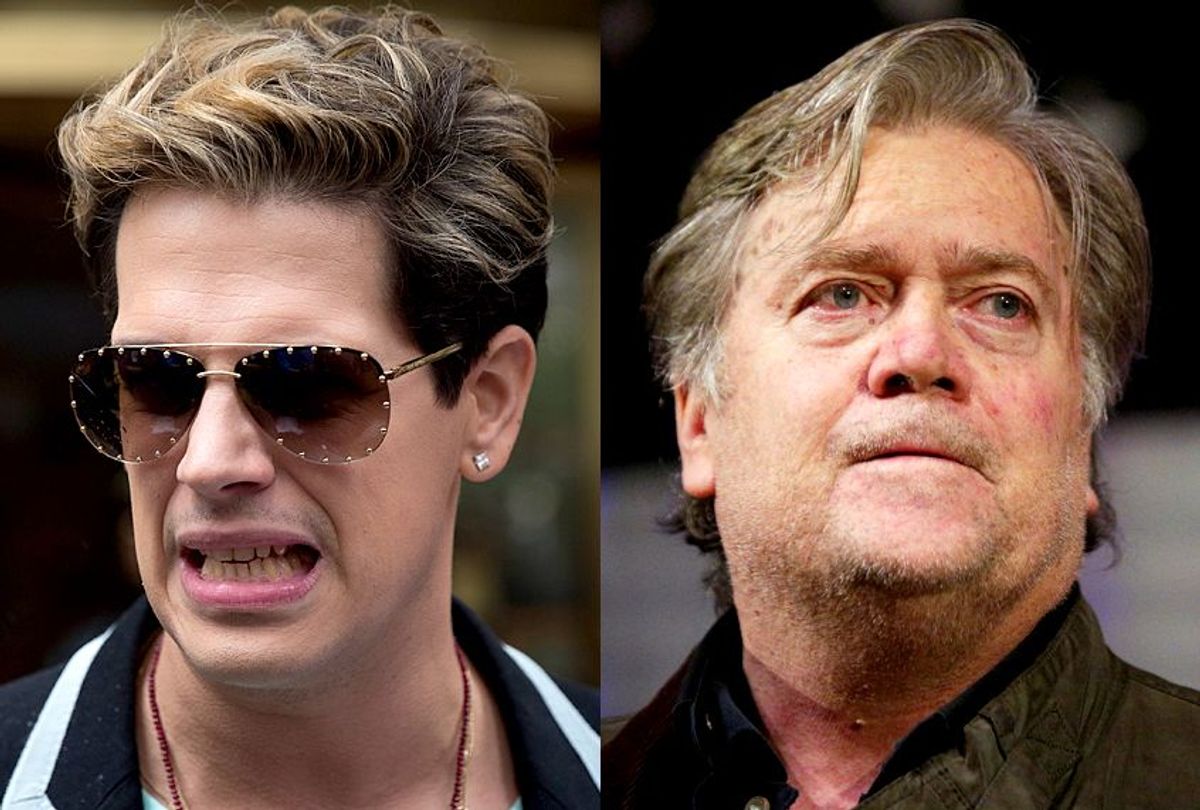 Steve Bannon and Milo Yiannopoulos are reportedly over, donezo. While the two have a long history together, cemented by working at Breitbart —  where Bannon was Executive Chair until his time in the Trump White House and where Yiannopoulos was a senior editor — the controversial gay white nationalist is reportedly being dumped by Bannon.

After a Buzzfeed exposé featured a video of Yiannopoulos singing “America the Beautiful” with white nationalists, including Richard Spencer, demonstrating Nazi salutes, Bannon reportedly said Yiannopoulos is “dead to me” and that he wouldn’t work with the media personality ever again.

The Buzzfeed article also said that Yiannopoulos worked with white nationalists to write a Breitbart essay which defined the term “alt-right.”

Though the young media personality resigned from the publication amid accusations of condoning pedophilia, he apparently expected to return to Bannon and Breitbart after the latter was fired from the Tump administration. Buzzfeed reports suggest that expectation is now unrealistic.

Even though Simon & Schuster dropped his book deal over the pedophilia scandal, it was Yiannopoulos' overt Nazism that was the last straw for Bannon (the publisher is now in an effort to mainstream his point of view via Breitbart).

Bannon’s break with Yiannopoulos is not clean however.

Following his departure from Breitbart, Yiannopoulos has attempted to parlay his successes as the world’s most famous gay right-winger into creating a successful multimedia organization, Milo Inc. It's not gone entirely according to plan. Far from influential, the company's website currently features a calendar for Yiannopoulos “Troll Academy Tour,” where he appears at free speech rallies throughout the world, and not much else of value. Yiannopoulos also self published his book shortly after it was dropped by publishers.

Both Breitbart and Milo Inc. are connected by Trump supporter Bob Mercer, a hedge fund billionaire and his daughter, Rebekah. The conservative pair own shares in Breitbart and are a major funder to Milo Inc. The Mercers have yet to confirm whether they will cut funding to Milo Inc., in the two weeks since the Buzzfeed reports were published.

A source close to the Mercers told Vanity Fair that the family “invested in Milo knowing that he would generate negative press, knowing that he’s someone with a past, someone with controversial habits. No revelation is going to take that away.” The pair has yet to respond to Bannon and Yiannopoulos' apparent break.

Bannon has not commented publicly on the estrangement or the financial ties. The spat, and the machinations behind it, do demonstrate one thing, however: When politics are so divisive that factions of the far right can split due to one-upping of each other’s outrageous behavior, it’s murky territory for mega donors who may be okay with dog-whistle politics, but draw the line when the white nationalism is overt.

Though Yiannapoulos has yet to respond to any of these controversies, he continues his crusade to become media's most odious figure. Currently, he's accusing Ellen Degeneres of being complicit in the Las Vegas Massacre.