"Stranger Things" and the sinister innocence of Reagan's America

Nostalgia isn't always a harmless enterprise, no matter how pleasurable it can be 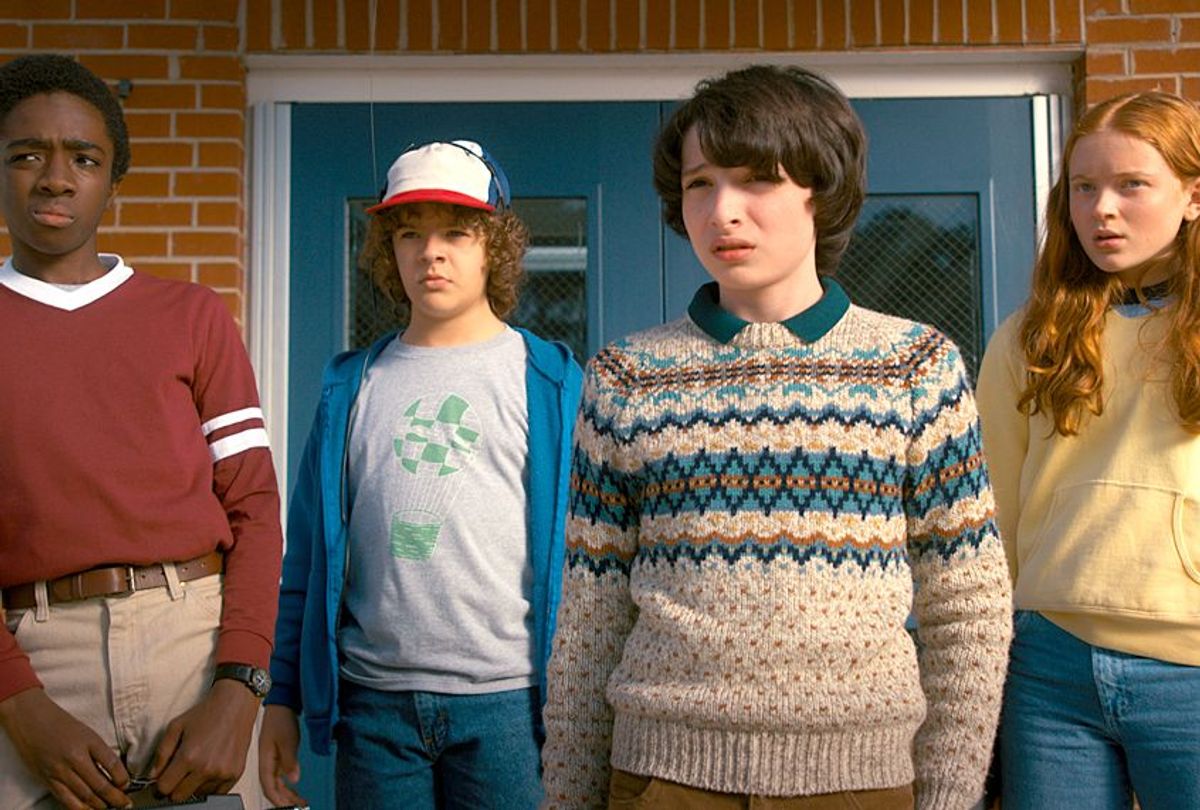 On July 11, Netflix confirmed this Friday's release date of "Stranger Things" Season 2 with an ominous 30-second teaser and poster. The largest image in the poster, other than a forbidding red sky, is a road sign reading "Welcome to Hawkins." Two weeks later at San Diego Comic Con, a full-sized three minute trailer screened to a packed auditorium and included the same road sign, reading this time "Leaving Hawkins, Come Again Soon." Assumption: The name and place "Hawkins, Indiana" is as much shorthand for and iconography of the series as "What about Barb?," The Upside Down and the '80s pop culture references everywhere you look.

The fact that Hawkins, while fictional, has a become a memorable character in a show loaded with them (more Lucas this season, this fan requests) is itself a kind of '80s nostalgia: Take Shermer, Illinois (The fictional universe of writer/director John Hughes); Castle Rock, Oregon (setting of "Stand By Me"); and the Goondocks (duh) as the short beginning of a very long list of movies from that time about the all-American small town as the ordinary backdrop of an extraordinary adventure. Many of these settings inspired "Stranger Things" creators Matt and Ross Duffer and are paid tribute to in Season 1 of the show.

I'm glad they did. I wrote a book called "Brat Pack America: A Love Letter to '80s Teen Movies" which looked at American places as seen in the kinds of movies both the Duffers and I love. It came out shortly after the release of "Stranger Things" Season 1. Besides "what is your favorite '80s movie?" and "when will they stop remaking my childhood?" the most common question I got on book tour was "What do you think of 'Stranger Things?'"

In silly dreams, this makes the Duffers my soul brothers in Pony Velcro Sneakers. But nostalgia is not a harmless enterprise and their creation, at its best and worst, makes equally brilliant and dangerous use of it. The place where that balance tips dangerously for "Stranger Things" is on the autumn roads and frightening woods of Hawkins, Indiana.

The Duffer Brothers originally wanted to call Stranger Things "Montauk" and set the show in that coastal Long Island town of the same name as an homage to another seaside tale, their favorite movie "Jaws." Ultimately the logistics of production didn't allow for that, so what we now see as Hawkins, Indiana, is the Atlanta-metro area. The sinister Hawkins National Laboratory is actually the main continuing education building on the campus of Emory University. Steven Spielberg and his studio, Universal, had to move filming for "Jaws," too, from Long Island, where Peter Benchley's novel is set, to the fishing village of Menemsha in Martha's Vineyard. Spielberg and team couldn't find a town on Long Island that looked desperate enough to keep beaches open on 4th of July weekend despite shark attacks. The callow opportunism of local officials and the small town they represented lent moral weight to the vanquishing of the shark. The character of Hawkins, Indiana lends moral weight to its citizens, particularly its kids, but with less noble results.

It's fair to ask two questions when TV mines the 1980s for inspiration: "Was it necessary to do so?" and "What assumptions were made by doing it?" Question #1 demands a TV series be something more than a series of memory flashcards. Question #2 is a reminder that a show set in the past is always a comment on the present and compels its creators to answer for that fact. I ask these questions to keep myself honest around nostalgia-driven pop culture, to avoid getting suckered into patronizing something whose chief appeal is simply reminding me of seventh grade.

How does "Stranger Things" answer these?

Question #1: When asked what I thought of "Stranger Things," I answered "A brilliant-kids-save-the-world-from-evil-show." That's a movie theme that exploded in popularity in the 1980s (see "The Explorers," "Red Dawn" and "War Games"), but very little about "Stranger Things" requires its exact date stamp. We can argue over whether the sleazy business of Hawkins Labs would have been discovered immediately with cell phone cameras or if Eleven's telekinetic powers could have been kept secret for so long in the time of Snapchat and Instagram, but fundamentally, the rods and struts of "Stranger Things" are small town, kids, a magic little girl and her creepy father who heads up a creepy corporation with a big ugly secret. It may feel right to open the series with a title card reading "November 6, 1983, Hawkins, Indiana" but it is far from necessary to the first eight chapters of the narrative to do so.

Unless your perspective on "Stranger Things" is as a kid then and a parent now. The cultural conversation around the series and its chosen time period has, in large ways, centered on what we once and no longer allow kids to do. A New York Times editorial published during Season 1 headlined, "The Stranger Things School of Parenting," called the show "a reminder of unstructured child wandering that — because of all the cellphones, the fear of child molesters, a move toward more involved parenting or a combination of all three — seems less possible than it once was" and reminds us that great '80s movies about gangs of kids saving their small town from monsters only do so unsupervised. "A show like 'Stranger Things' doesn’t tell us that the world is safe, because it isn’t," writer Anna North continues, "but it’s a reminder that bravery needs its own space to grow." An equally sad reminder of this might be how few movies and TV shows set in the present feature ordinary kids (instead of wizards or super heroes) saving their ordinary small towns from monsters.

Quite unintentionally, the Duffers have created a present-day fantasy about the past that makes the unsupervised courage of children seem from a time dead and gone. And the irony of it is that the time of "Stranger Things," statistically at least, was far more dangerous for unsupervised child heroes in training: Childhood mortality rates and reports of missing kids are today half of what they were in 1990. According to data reported by the Polly Klaas Foundation (an organization who "Stranger Things" star Winona Ryder was instrumental in the formation of) 99.8 percent of children who go missing in America come home, and a fraction of 1 percent are kidnapped by strangers. The Washington Post summarized these findings in a 2015 article with the headline "There has Never been a Safer time to be a Kid in America." The 2016 passage of the Every Student Succeeds Act, sponsored by Utah Republican Senator Mike Lee, contains provision 858, which makes walking to and from school alone a right protected by federal law.

Are small towns like Hawkins inherently safer places for kids to ride bicycles through at night chasing monsters? In both culture and myth, the American hamlet has long been the gathering place for these prejudices. The idea of a village being inherently safer than the city has been with us at least since kids started running away from farms and towards bright lights and skyscrapers to seek their fortunes. At best, it's an argument of relativism rather than fact: a place is "safe" only when compared to another that is "unsafe." If population size is the determining factor of perceived safety, bear in mind Anchorage, Alaska has a higher murder rate than New York City. At worst, it's a bigoted one, containing the assumption that Americans who live in certain places are inherently kinder and better people than those who live elsewhere.

Our most gifted storytellers of the gothic and grotesque (think Shirley Jackson, Flannery O'Connor, David Lynch) tempt us with the simple-minded notion of small town goodness, then pull back the curtains on its cruel practices and our naïveté in being surprised by them. Their less gifted imitators are simply lazy around that same notion, letting us believe that the typical American school town is always a community of the innocent to be invaded by the merciless and mean, rendering the community's fear of anyone who looks or seems different than them — anyone from the outside — entirely justified.

The movies of the 1980s we remember were both. The cast and crew of "Stranger Things" has promised Season 2 will be darker than Season 1 and draw more from horror movie sources. Two of the decade's biggest horror franchises, "Halloween" and "Nightmare on Elm Street," are both social critiques of unneighborly small communities. On the other hand, '80s stalwarts like "Gremlins" and "Adventures in Babysitting" carried on with the myopic notion that small towns are filled with the virtuous and to either leave them at night or let in outsiders is to tempt danger. "Morning in America," the most famous commercial from Ronald Reagan's 1984 presidential re-election campaign (the timeframe of "Stranger Things" Season 2) featured white Americans in white American small towns doing things that seemed out of the 1950s and asked, "Why would we ever want to return to where we were less than four short years ago?" Ronald Reagan's favorite movie from this time was "Back to the Future," not because it made a great joke about him ultimately being president but because Hill Valley in 1955 was the small town he wanted his "Morning in America" political philosophy to usher in once again.

To their credit, the Duffer Brothers and their team have displayed considerable self-awareness around making TV in the present about the past. Egregious racial and sexual stereotyping is studiously avoided and Eleven is a present day creation constructed from a present-day understanding of what young women are capable of. Where they have tripped over themselves is in importing the reductive magical thinking about small towns like Hawkins from the decade of moviemaking that inspired them: That small towns in the American heartland are where good solid people live and monsters are twice as horrifying when they attack those good solid people and shatter what we falsely perceive as the innocence of small town America.

It's a prejudice "Stranger Things," unintentionally, sinks its bicycle wheels into. If the horror genre is by definition a reflection of what we presently fear, "Stranger Things" unintentionally works off of the fear of what may be amassing just outside the town limits of what we consider "real honest America." How often did you hear something like that in the run-up to the 2016 presidential election?

Nostalgia is not a harmless enterprise. All too often it's a shovel rather than a sieve, dredging up elements from the past we remember fondly but also unearthing those that should have stayed interred. In gearing up for the next chapters and the five-season arc the Duffers reportedly want the series to take, let's remember that the portrayal of Hawkins, Indiana, circa Halloween 1984, contained many of the same dark tendencies as complicated, fractured America of today. And though I have loved celebrating that era in my work over the last few years and loved watching "Stranger Things" celebrate it too, maybe the parts of it that now are demonstrably upside down should stay behind a closed door where they can't hurt anybody.