Finding peace with your ghosts: Advice from a funeral director 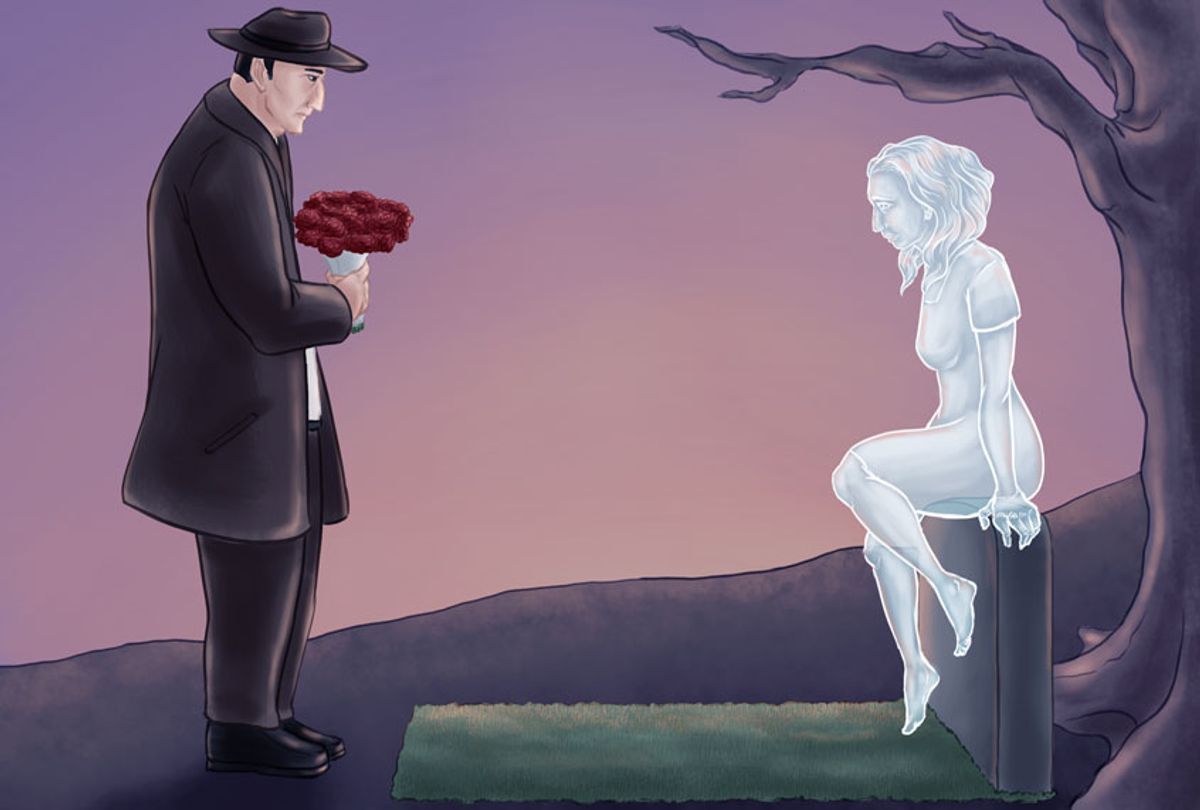 There's an elderly gentleman named George who has been stopping by the funeral home on occasion to talk about anything from the weather to the most recent details of his grief work. George lost his wife a couple months ago, and it seems — from the stories he tells me — that theirs was a deep and enduring love. By the time George met his wife some 60 years ago, he had already lost both his parents to sickness. Without any siblings or many friends, George invested himself entirely in their marriage, an investment that gave him high returns in love, but now grief.

Even though our funeral home is consistently busy, I've learned that one of the best things I can do for George is to push aside my to-do list, take a deep breath and just listen. So I did. He told me that losing his wife was so much harder than he thought it would be. He recounted how his pastor wisely told him that there was no timetable for his grief and that he should be patient with his feelings.

"I'm throwing nothing of hers out," he told me. "I'm keeping all her stuff right where she put it." He went on to say that every morning he makes her breakfast like he always did when she was alive and that he even bought her a Christmas gift.

"It helps," he finished. "It helps to go through the motions; even though she's not here I still love her just as much as I did when she was."

A couple of years ago I might have felt uneasy with George's insistence to make his wife breakfast, his keeping her stuff, and his gift-giving, because it smacks against the acceptance stage of grief work. Like many others, I had mistakenly believed that "The Five Stages of Grief" in the Kubler-Ross Model were meant for people grieving the loss of a loved one. I was wrong. The model was a reflection of what Kubler-Ross saw in people who were dying.

As new grief models have come out, it seems that this whole idea of reaching the last stage, or of closure, is a myth altogether, because our grief lives as long as our love. What George was experiencing and doing wasn't morbid, or weird, or pathological, it was . . . good. He was, in a sense, living in the liminal space of Halloween. He was still connected, in love and life and memory, with his dead — but still alive to him — wife.

Dare I say he was living with her ghost?

Every year Halloween comes around, and with it those classic horror flicks, with their dated special effects and well-timed scare scenes that make us jump even though we know they’re coming. Who doesn’t love seeing children dressed in costumes? The weather. The fall leaves. The Pumpkin Spice everything. It’s the most wonderful time of the year! But beneath the cute and fun is this flirtation with the spiritual — albeit the dark side of the spiritual — that abides talk of ghosts, spirits and hauntings.

In the traditional Irish calendar, there are four “quarter days” that mark the beginning of a new season. The first of November marked the beginning of winter, considered the “darker half” of the Irish year. But the day before the first of November (October 31st) was seen as a liminal, in-between period where the Otherworld seeped into this world, allowing spirits — some good and others bad — to visit the living. Instead of shutting their doors and pouring some pre-Christian version of holy water around their houses to keep the spirits away, people would often do the exact opposite. They’d open up their homes, set extra places at the dinner table, and even prepare a meal with the hope that maybe the dead would bless them with health and wholeness through the winter months.

I want to believe in the spiritual kinds of ghosts. I love how the imagination can dance around these ideas, but the rational part of my brain usually wins over the mystical. You’d think a funeral director would’ve seen something, right? Maybe a ghost in the funeral home late at night? Or something misty and creepy at the cemetery? I’m often awake at the witching hours, going on late-night death calls, strolling through the silent corridors of nursing homes. There is a silence to the witching hours, a calm that can be disarming, but it’s never been an eerie silence for me, even when I’ve been handling the dead. I can say that the tragic deaths — the murders, some suicides, and some grisly accidents — have a presence to them, but I’m not sure if the presence is spiritual, or just the weight of the horror.

Maybe I’m wrong. Maybe there are spirits. Or maybe spirits do exist and they’ve always been kind to me because I care for the dead. I’m willing to entertain the maybe.

I do, though, believe in another kind of ghost. One that can be much scarier. Much more damaging. And much more haunting.

There is this liminality between the living and the dead, an in-between where the bonds of love can still dwell. Liminality is something that makes us uncomfortable. We like binaries, like yes or no. On or off. But some things exist in the in-between. They are yes and no. Dead and alive. Present and absent. The liminality of our dead is like a ghost, like Halloween. Because our loved ones are gone and they’re still here with us. Their actions, character, and — yes, I think I can use this word — spirit have literally helped form your neural pathways, so that the way they thought, their little idiosyncrasies, are dwelling in you. I write in my book, "Confessions of a Funeral Director," that behavioral epigenetics have found that our experiences can be passed down on a molecular level. I write, “There are literal pieces of your loved ones in you from generations ago. And there will be pieces of your love for generations to come that play out in joy, confidence and bravery. Love may not be the same as power, and it may not always lead to survival, but love, unlike anything, finds a way to live on.”

Like my friend George, and the traditions that shaped Halloween, instead of closing out these liminal spaces — these ghosts of our loved ones — we’d do well to let them in. Ghosts get mad if we shut them out, if we don’t acknowledge that love lives on, if we force them into binaries. Repressed emotions, repressed bonds, repressed loved ones can haunt us for the rest of our lives if we decide to shut them out. This doesn’t mean we have to keep all their stuff and make them scrambled eggs and bacon every morning, but it does mean that closure is a myth. Not only is it a myth, it’s also harmful, for the living and the dead.

The dead can be scary if we don’t give them space. But, if we make peace with our grief, peace with our liminal spaces, and peace with our dead, it might provide us with favor during the cold, dark winter that lies ahead.

Caleb Wilde is a partner at his family’s business, Wilde Funeral Home, in Parkesburg, Pennsylvania. He is the writer behind the popular blog, Confessions of a Funeral Director, and host of the podcast "Story of My Death." He recently completed postgraduate work at Winchester University, England, in the program, “Death, Religion and Culture." He has been featured in top media outlets including ABC’s 20/20, NBC, Huffington Post, The Atlantic, NPR, and TIME magazine. He lives in Parkesburg, Pennsylvania. Please visit him at calebwilde.com.