In the fallout of Anthony Rapp's allegations, the streaming giant announces the show's next season will be its last 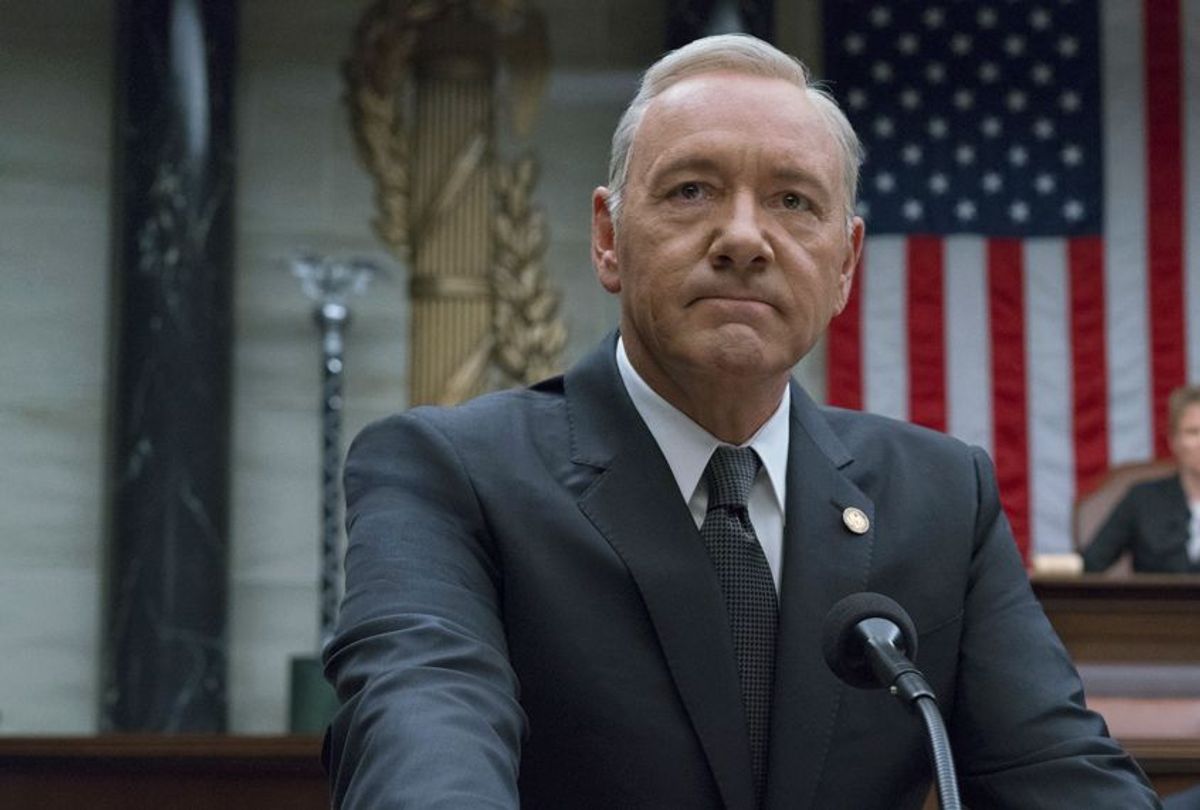 Deadline is reporting that Netflix has determined that the forthcoming sixth season of its series "House of Cards" will be its last. The news comes less than 24 hours after actor Anthony Rapp accused "Cards" star and producer Kevin Spacey of sexually assaulting him in 1986, when Rapp was 14. There is, as of publication, no available statement from Netflix — but reliable sources, including the Hollywood Reporter and Variety, have also individually confirmed and reported the development.

It is still unclear whether there is a link between Rapp's accusation, Spacey's much-criticized apology and the cancellation of future seasons, though the timing is suggestive. Other details, such as whether the 13-episode sixth season will come to series conclusion or simply stop mid-narrative, are also unavailable at this time. Currently, "House of Cards" is reportedly over six weeks into its shooting schedule for season six.

In a comment that did not include news of the move above, Netflix and "House of Cards" co-producer Media Rights Capital stated “Media Rights Capital and Netflix are deeply troubled by last night’s news concerning Kevin Spacey. In response to last night’s revelations, executives from both of our companies arrived in Baltimore this afternoon to meet with our cast and crew to ensure that they continue to feel safe and supported." The statement added "As previously scheduled, Kevin Spacey is not working on set at this time."

As reported, Rapp, a star of Broadway and the ongoing CBS streaming series "Star Trek: Discovery," alleged to Buzzfeed on Sunday that Spacey had cornered him in a bedroom during a party in the older actor's New York City apartment in 1986 and "picked me up like a groom picks up the bride over the threshold." Rapp added "But I don't, like, squirm away initially, because I'm like, 'What's going on?' And then he lays down on top of me." Rapp managed to extricate himself from that situation and kept the alleged incident private for over 30 years.

Spacey subsequently apologized via a public statement saying he was "beyond horrified" to hear the story and claiming that, if indeed the incident did happen, it was an example of "deeply inappropriate drunken behavior." In the course of that public statement, Spacey confirmed the longstanding rumors that he is indeed homosexual.

That apology itself has become the focus of attention, as many inside and outside of the LGBT community have criticized Spacey for using his coming out as a means to deflect the seriousness of the allegations against him (again, Rapp was well under the age of consent in New York State at the time). "For a famous person to deflect these accusations with a long-in-the-making coming out is so cruel to his supposed new community it stings," said writer Richard Lawson in a tweet that captured much of the spirit behind many other posts attacking Spacey for his statements.

As much as this is a turning point in the lives of Spacey and Rapp, it is also (somewhat less so) a turning point in the history of Netflix. Created with David Fincher, the "House of Cards" premiere in 2013 marked the streaming giant's first successful foray into the sort of original, prestige television it has become known for. While later seasons of "House of Cards" have been inconsistent, it still has managed to garner over 45 Emmy nominations and seven wins over its run.

The previous, fifth season of "House of Cards" debuted in May 2017; prior to today's news, the sixth season appeared on track to premiere around the same time in 2018. It is unclear if the currently unfolding news about Spacey or the show's forthcoming cancellation will affect the show's shooting schedule or release date.