How "Stranger Things 2" cloaks racial tension in the heartland

In season 2, bigotry comes to Hawkins, but the Duffer Brothers allow viewers to choose whether they want to see it 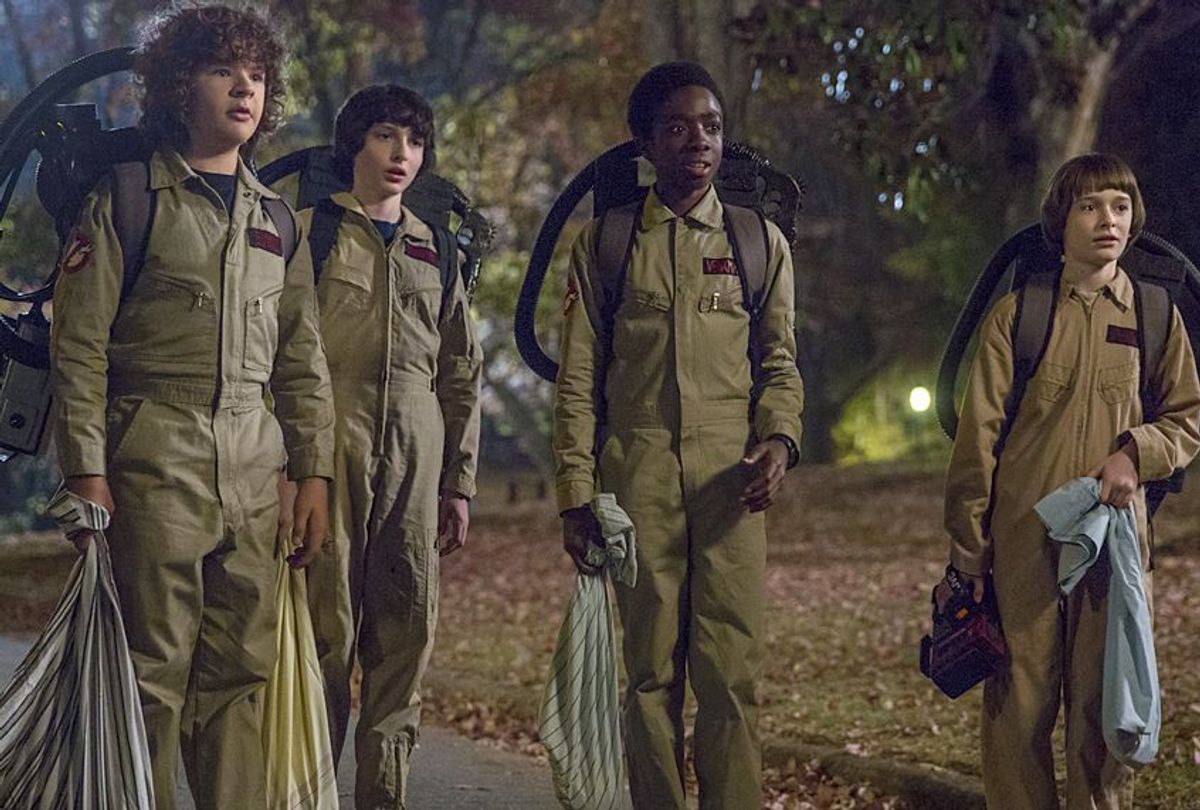 On Halloween in Hawkins, Indiana, the young heroes of “Stranger Things 2” dress up like the team in “Ghostbusters.” But there's a problem: Mike (Finn Wolfhard) and Lucas (Caleb McLaughlin) show up to school dressed up like Bill Murray’s character Peter Venkman. Mike is upset, insisting that Lucas agreed to be Winston, the only black character in the movie’s team.

Lucas insists he specifically did not want to be Winston, and Will (Noah Schnapp) and Dustin (Gaten Matarazzo) back him up. When Mike asks Lucas what’s wrong with Winston, Lucas has a reasonable explanation. He joined the team super late, he says.  He’s not funny, and he’s not even a scientist.

“Why not?” Lucas asks, causing Mike’s words to fail him. So Lucas fills in Mike reply for him:“ Be-be-because you’re not black?”

“I didn’t say that!” Mike insists. Lucas retorts, “You thought it.”

“Stranger Things” heavily relies on the notion that people are willing to see what they want to see. This is how a government project that rips a hole in our dimension is able to keep on operating even after Will’s friends, his determined mother Joyce (Winona Ryder) and the town’s police chief Jim Hopper (David Harbour) stumble upon their secret headquarters and strike a deal to bring Will back from the place they call the Upside Down. The band agrees to keep the whole dirty business a secret. Easy enough; who would believe they’d uncovered a world ruled by a shadow monster who commands man-eating Demigorgons?

But this idea applies to the viewer’s interpretation of the story and its characters motivations as well, which is why the Lucas storyline in these new episodes is, on a very obvious level, incredibly frustrating and exemplifies the danger inherent to its nostalgic appeal.

This is especially true now, when a significant portion of white America refuses to conceive of the idea that systemic racism exists, and a share of resentment toward people of color is born out of the viewpoint that they’re looking for it where it doesn’t exist. Black football players are millionaires; shouldn’t they be grateful to the nation who gave them that opportunity? A black president created a health care plan that is equated with a handout; it should be repealed. But this is about socialism, not blackness. It’s about American values, not racism.

It’s about one slice of the population not saying certain things and the other attempting to make them understand that they don’t have to utter an epithet in order for the message to ring loud and clear.

And this is where Lucas’s “Stranger Things” storyline becomes incredibly irritating.

Let’s make one thing clear: Mike is not a racist, and Lucas knows that. It must be said that Lucas benefits from a more expansive backstory in the sequel season than other characters do. The scenes featuring his sister Erica, a Rudy Huxtable stand-in, are priceless.

“Stranger Things” infers statements about Hawkins and its characters without directly having its characters say anything. The Byers family’s run-down house marks them as part of the town’s poorer residents, just as Lucas lives in a large and very nice house. Lucas and Mike also have the best toys. In battles, he’s the kid who brings the wrist-rocket slingshot.

And Lucas and Mike are great friends, close enough that Lucas can call Mike on his bullshit. That much we can see. Lucas also is a black kid in a mostly white small town, a surrogate for any minority who has lived the experience of being a token person of color in mostly white spaces. Lucas is the kid with an American flag hanging on his bedroom wall. You view his camo headband and undereye black as an homage to “Rambo” or tip of the hat to Parker, Yaphet Kotto’s character in “Alien.”

He’s a skeptic and sensible because he has to be. Those qualities also make him a valued member of his friend group. Black viewers may also recognize them as survival skills.

Where Lucas faces the most danger is from Billy Hargrove (Dacre Montgomery), the mullet-sporting new kid with a chip on his shoulder and a heavy metal soundtrack. From the moment Billy rides up in his bitchin’ Camaro and primps in the mirror, we can see he’s going to be trouble. High school girls view him as the kind of trouble they want; bystanders ogle the tight cut of his jeans across his butt.

They choose not to see another side of Billy, the one who verbally abuses his stepsister Max (Sadie Sink) and aggressively challenges Hawkins High’s social king Steve Harrington (Joe Keery). Steve is able to stand up for himself. The much smaller Lucas poses no physical threat to Billy.

Billy targets Lucas nevertheless after he sees him hanging out with Max. First he sees them arguing walking out of school together. Billy glares at Lucas from a distance, then interrogates Max when she gets to his car. Why was he talking to you? he asks. Why are you so upset? Did he cause any trouble.

Max explains that Lucas is just a friend, but that doesn’t end the discussion with Billy. He grabs Max by the arm roughly, scaring her.  “This is serious shit, OK?” he barks. “I’m older than you. And something you learn is that there’s certain type of people in this world that you stay away from. And that kid, Max. That kid is one of them. You stay away from him, you hear me?”

There’s certain type of people in this world that you stay away from. That kid is one of them.

From there Lucas and Max become embroiled in a cat-and-mouse game of avoidance with Billy until the inevitable happens, and Billy discovers them hanging out together. He grabs the much smaller Lucas and slams him against a wall, declaring that he’s going to break him.

A few things are at play in this storyline which allow the viewer to explain away aspects of Billy’s behavior if they choose to do so. One, Billy is clearly an ‘80s stereotype, some afterbirth resulting from an experiment to merge Jim Morrison with Dee Snider.

He’s a metal head looking for something to prove, and Lucas just happens to be a target because Lucas happens to be a love interest for Max. It doesn’t matter what color his skin is, this argument goes; Billy would have picked on any of Max’s potential boyfriends. After all, not once does he utter any specific epithets to describe Lucas or specifically give voice to the societal-bred stereotypical fear some white men harbor with regard to black men. He’s just, you know, a certain type of person.

“Stranger Things” creators Matt and Ross Duffer also maintain the image of Hawkins as a Spielbergian idyll, a nice town where nothing ever happens, by having racism come to town with Billy. Plus, Billy gets to have a good excuse for his explosive rage. In a later episode his father comes home and punishes him for failing to keep an eye on Max by punching him in the face and calling him a faggot. Targeting a gay kid might not be as simple as honing in on a black kid that literally shows up on his doorstep.

A recent Mic article paints Billy as a Trumpian villain, “a white high schooler who embodies the white rage and disaffection that largely characterized Trump’s rise.” But that only explains part of why he’s so disturbing and why his bullying of Lucas sends an incomplete message.

For Billy and Lucas also personify the deceptive illusion of the "Morning in America" myth Ronald Reagan peddled about the heartland in the 1980s. We like to remember it as the heyday of MTV, marketed with a progressive “We Are the World,” “United Colors of Benetton” picture of society. We can choose to forget that MTV did not feature black artists for a long time until publicly pressured to do so, and that low-income people of color were demonized as welfare queens and made the targets of paramilitary-style policing by law enforcement in major American cities such as Los Angeles.

Viewers can choose, as many declared to do for so many years, to not see color.

The Duffer Brothers are right to refrain from inserting political polemics into their show, of course. “Stranger Things 2” is a supernatural fiction, and they have an obligation to maintain that tone. And while they should be commended for incorporating flaws in the suburban cul-de-sac fantasy that fueled the first season, it would have shown more bravery for them to be more specific about the ordinary evil and danger posed by people like Billy.

In a war council before the climactic final battle in “Stranger Things 2,” a character likens the shadow monster and its minions to the Nazis in World War II.  Its evil spreads with an insidious virulence and is linked to a single force, a hive mind. This informs the group solidifying them as the party allied with lawful good against chaotic evil. The story makes its otherworldly malevolence real enough to name it – they dub it the “Mind Flayer.”

The sinister peril Billy visits on Lucas resembles one we’re contending with in the real world, and receives no name and is left open to interpretation. True life remains stranger than fiction and infinitely more dangerous than Hawkins, Indiana. But maybe knowing this allows us to breathe a sigh of relief for Lucas. If the Duffers aren’t comfortable specifically addressing the dangers he’d face in the real world, maybe they’ll keep him safe in the town’s romantic snow globe.