Is Trump trapped? He's hemmed in by bad advice, with no way out

He'd love to fire Bob Mueller (and Jeff Sessions) but knows he can't. Outlandish Hillary theories won't save him 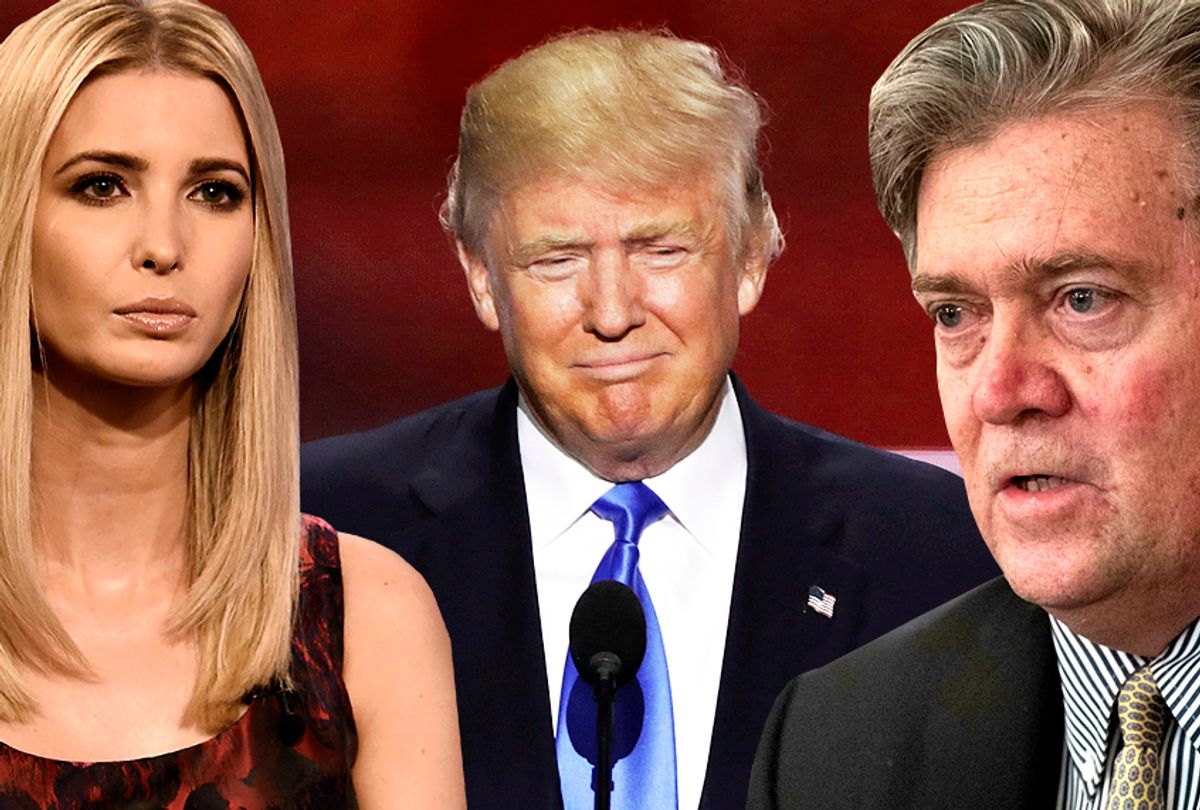 According to The New York Times, the president is cool, calm and collected in the wake of special counsel Robert Mueller's indictments of three of his close associates this week. He called up a reporter to say “I’m actually not angry at anybody. I’m not under investigation, as you know. . . . Even if you look at that, there’s not even a mention of Trump in there. . . . It has nothing to do with us.” He also said, “I just got fantastic poll numbers" and that he's "really enjoying" the job. Sure he is.

He didn't tell the Times reporter what poll numbers he was looking at, but whatever they were, they weren't anyone else's definition of fantastic. His best job approval numbers at the moment are in the low 40s, and most have him languishing in the 30s. Gallup's daily tracking poll hit a new low this week: 33 percent. Trump's longtime friend and adviser, Sam Nunberg, told Vanity Fair's Gabriel Sherman, "You can't go any lower. He's fucked."

Indeed, it may have been that article, as well as a few others, describing Trump as intensely frustrated and venting in private to friends that made him call up the Times reporter and at least pretend to be unconcerned.  Sherman quotes one Trump friend anonymously saying, “He thinks it’s unfair criticism. Clinton hasn’t gotten anything like this. And what about Tony Podesta? Trump is like, When is that going to end?” That certainly does sound like him. Infantile petulance, attempts to cast blame and whining about the unfairness of others are his trademarks.

The president is also borderline-delusional when he insists that he isn't under investigation. The Washington Post reported last June that Mueller is investigating Trump for obstruction of justice for his attempts to shut down the Michael Flynn investigation and for the firing of former FBI director James Comey, among other things. Ironically, one of the main reasons Trump fired Comey was the fact that the latter refused to announce publicly that the president was not under investigation. It backfired on him spectacularly.

As for there being no mention of Trump in the indictments, that's not exactly true either. He didn't mention that foreign policy adviser George Papadopoulos pleaded guilty to lying to the FBI about meeting with Russian emissaries, who told him they had thousands of hacked Hillary Clinton emails long before anyone else knew about it, and who apparently wanted to set up a meeting with Trump during the campaign.

We already know that Trump blames Attorney General Jeff Sessions for recusing himself from the Russia investigation and therefore somehow failing to protect him from the Mueller investigation. Sherman reports that Trump has also turned on Jared Kushner, his son-in-law and White House adviser, and has vented about Kushner to his pal Steve Bannon, who can be counted upon to twist the knife into his old nemesis. Trump's friend Nunberg is quoted saying, “Jared is the worst political adviser in the White House in modern history. I’m only saying publicly what everyone says behind the scenes at Fox News, in conservative media, and the Senate and Congress.”

I'm guessing that Thanksgiving at Mar-a-Lago is going to be just a little tense this year.

According to Sherman, Bannon and Roger Stone are both pushing Trump to take the fight to Mueller, which obviously appeals to Trump's own instincts. Even Bannon understands that firing Mueller at this point would be a political disaster, however. He has apparently suggested that Trump should hire some tougher lawyers to work above Ty Cobb in the White House and should persuade Congress to defund Mueller's investigation (which isn't going to happen.)

Stone, on the other hand, is convinced that flogging the ludicrous notion that Hillary Clinton colluded with the Russians to sell them uranium seven years ago is a "bank shot" that will push Mueller aside without having to fire him. In Stone's version of the universe, Mueller would  supposedly have to be informed that he and everyone else in the Justice Department and FBI are under investigation. Or something. It's not quite clear.

The chances of Sessions naming a different special counsel to investigate Clinton -- one of the right's cherished dreams -- may have diminished this week with the news that Papadopoulos, who has pleaded guilty to lying about his contacts with Russians, says he mentioned them at a meeting of the Trump campaign's "national security and foreign policy advisory committee" in 2016. Since Sessions was the chairman of that committee, this would represent yet another discussion of Russian interest in the Trump presidential campaign that the attorney general neglected to mention during his confirmation hearing. Maybe Sessions needs to up his dose of Ginkgo Biloba, because his memory seems to be failing. At this point, Sessions has enough personal legal exposure that he will likely be careful about slandering Robert Mueller.

All this is reportedly leading to people within the White House beginning to consider impeachment as a real possibility. Sherman claims that some high-level advisers now leave the room when Russia-related topics come up, to spare themselves future appearances before a grand jury. Bannon is said to be worried that "establishment Republicans" are just waiting for an opportunity to impeach Trump, which raises the question of why Bannon is going out of his way to turn them into his sworn enemies. Maybe Jared Kushner isn't the worst political strategist in Trump's orbit after all.

So far, Trump is following his lawyers' advice as best he can, which means tweeting out his angry thoughts as he watches Sean Hannity and "Fox & Friends," but then calling up The New York Times to proclaim how calm he is about the whole thing. Who knows how long he'll be able to keep it together?

The president is soon leaving town for a couple of weeks for his big Asia trip, which reportedly has his aides beside themselves, since they know that his unpredictable and ill-mannered behavior could easily cause an international incident in a region where protocol is extremely important.

“You never know what he’ll say,” an administration official said, adding that the grueling schedule could heighten the risk of mistakes. An outside adviser to the administration concurred: “The potential for error is huge.”

That could be said about any occasion when the president opens his mouth. But with the Korean crisis at a boiling point, an unforced error in Asia could be catastrophic. Let's hope Trump's advisers can keep him away from Fox for most of the trip. Maybe it will calm him down a little bit to focus on his job as supposed leader of the free world for a few days, instead of obsessing over what people say about him on TV.