Gottfried on "Gilbert," the documentary that may make you hate him less

Director Neil Berkeley points the camera at Gottfried to present a side of the man you might even like, a little 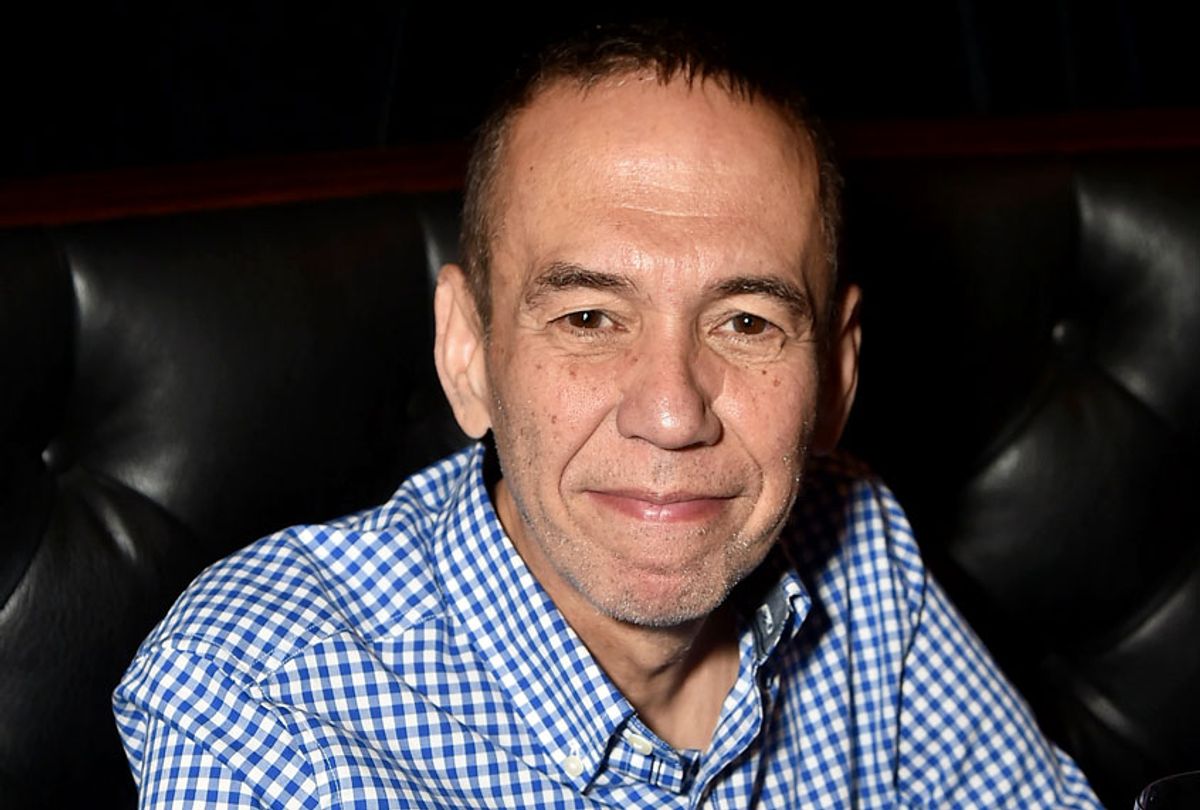 “Gilbert” director Neil Berkeley’s fabulous documentary about comedian Gilbert Gottfried recasts the “obnoxious” performer as a family man with a wife and two kids. He still tells jokes — many of them as funny as they are tasteless — but viewers get a glimpse into Gilbert’s private life, his childhood, his fears and obsessions as well as, well, his cuddly side. Fans of the comic may develop a new understanding of Gottfried, and anyone who thinks a little Gilbert goes a long way will have a new appreciation for him — if they bother to see this film.

Gilbert, however, is the first to admit he does not want folks to see his documentary. This is not because he doesn't always come across in the best light. That said, he is revealed as being cheap; hoarding huge quantities of hotel toiletries. The most endearing thing he says to his wife, Dara, is “Fuck you.” And his sisters reveal some things that might be considered too personal.

But Gottfried operates largely without contempt. He actually comes across at times as rather warm and fuzzy. A scene of him talking to parents of sick children at a St. Jude's fundraiser is both touching and amusing.

Don’t be fooled though. Gilbert has never been one to shy away from the inappropriate. Throughout “Gilbert,” the comedian makes colonoscopy jokes, Nazi jokes, 9/11 jokes, and in a famous gaffe, he tweeted insensitively about the Japanese tsunami. But audiences will be gasping and laughing as he reveals how he developed his sense of humor and earned the respect of his comic colleagues.

The comedian sat down to crack wise with Salon and talk about “Gilbert.”

Note: This Q&A was edited down from a video interview done at Salon in April.

Gilbert, you are a hoarder and you love dental floss, so I brought you some. It’s slightly used.

Thank you. I'll put it with my mountain of dental flosses.

You're very conscientious about cleaning your mouth. Is it because it’s so dirty?

Well no, I mean number one, it's just to get something for free. If someone's handing out Maxi pads on the street, I'll take them because it's free and I want it.

I think all the above. It's like sometimes it shocks you into being funny. For most of my career, I would work clean. I would go out of my way to work clean, because it used to always worry me when I watch a comedian on television and let’s say the punchline was, “I wore a hat.” You go, what's so funny about that? Then you realize the producers of that show saw him at a club where he goes, “I wore a fucking hat.” Then, everybody started laughing and then they said, “Oh it’s a great joke, it just need that one word there.” That word is the joke.

That’s something that's very essential to your comedy: the words and the language. It's not just the cadence and the rhythm, it's more what the words mean — the order that they are presented. How careful are you in terms of choosing how to tell a joke? You tell the same joke several times in “Gilbert,” and yet each time it's a little different because of the delivery. Can you talk about that?

Yeah. I don't know, with me it's more instinctive or something you learn over the years. Because I’m never really in my mind going, “Oh, well this word should go here or that word.” Maybe sometimes it just happens by itself after I told a joke a few thousand times. I'll go, “Oh, maybe, ‘if’ instead of, ‘the.’”

What is the most embarrassing moment that you didn't want to reveal in the film?

For me, every single moment of it. The film's been getting great reviews, which I was never expecting.

I keep reading that the star is the worst thing about it. It would be great if it wasn't for him.

I definitely respect their opinion on that one. Because to me, it’s like what hell must be like. I feel like hell is you sit in a chair and they just show you a movie where you watch your whole life.

I sat in a chair and watched “Gilbert” and it didn't seem like hell. It was actually kind of funny. You have this sensitive side to you and you're being recast as a family man. What was the impetus to say, okay now I want a documentary of my life, because I'm ready for hell.

Never. Never agreed to it, never said okay. I'm one of those people who could be pushed into anything I think. . . . The filmmaker Neil Berkeley said, “I want to do a documentary on Gilbert Gottfried.” I thought he should set his standards a little higher.

What made you trust him?

I never, never. I wake up every morning . . . after a while he just started showing up with his camera. I'd wake up and I'd go, “Oh God, is he here again?”

You're always in your bathrobe, which I think is great. I bet it was a free bathrobe.

Absolutely. Yes, I swiped it from a hotel that didn't have my credit card number.

Yeah, yeah. Of course I think they say there are . . . acceptance and denial, anger. It was produced by Elizabeth Kübler-Ross.

What did you want people to get out of it? You want them to like you?

Well it's too late now. Why ruin a good thing.

Because people sometimes cringe at the mention of your name or your voice . . . it's like, you know maybe the film subject matter will change that and I think that sort of . . .

Yeah, they'll hate me less. That's all I hope for in my career, is that they hate me less! That's all I'm asking for. Just hate me less. In fact on posters for anything or for shows I'm doing, the big blurb is, “Well, it’s not the worst thing I've ever watched.”

I'm wondering if you feel a pressure to perform or be funny? What is expected of you? I mean, you are seen speaking at the St. Jude's fundraiser and you could have just poured your heart out, but instead you just crack wise. Can you talk about that?

Well that's what you . . . one number, that's what you've been brought there . . . to entertain them. That scene in particular to watch it, I've been in situations like that before, but you see there are people there like one guy in particular making a speech about his daughter with cancer, and there are other people who are dealing with these issues, and so you go up there -- and I feel like comedy won't destroy tragedy, but if you make a person in that situation laugh for a second, for that second tragedy loosens its grip on them for a second.

Do you bring your family into the film as a way of humanizing you?

Well that was never my idea to make me human. That would be a little too much to ask for. To make me reptile would be close enough. Yeah, no, that was the filmmaker, and the big car chase was also his idea.

I liked the musical number.

Yeah. Wearing the Hawaiian skirt made me a little uncomfortable.

Well, the grass itches. You have tremendous respect from other comedians. Why do you think that is? When did that moment happen that you felt accepted by them?

I think the first time I noticed it was at the clubs, that when I would be on, the comics would sit in the back and watch me. Sometimes the comics would be the only ones laughing. I remember in particular, like Seinfeld back then, Jerry Seinfeld was . . .

Oh, thank you. I didn't know who that was.

Yeah, yeah, I know I was saying Jerry Seinfeld, I thought I would say President Lincoln, Abe Lincoln, yeah. Jesus Christ, he was the guy on the cross. Yeah, son of God, yeah.

Heard of him. I think we met once at a party.

The light bulb, it's that thing that lights up your room and yeah. Water, fish swim in it, people drink it. Seinfeld, Jerry, he has his own show . . .

But you have a Podcast.

Yes, I do have a Podcast.

Because you've got a great face for radio.

I wouldn't trade places with Seinfeld to have a show that would support his great, great grandkids so they will never have to work ever again. Jerry Seinfeld . . .

Yes, and sometimes Meryl Streep would stop by and tell a couple of jokes. Kirk Douglas was a really funny guy at the clubs. Moses would come into the club and first he'd take his sandals off to kick the sand out of it. Charles Manson, when he wasn't killing people, he would just come into the clubs and the first thing Charles Manson would say to me is, “Is Seinfeld here?” I'd go, “Seinfeld?” He'd go, “Jerry Seinfeld.” I'd go, “Oh Charlie you're such a nut.” Then, he'd go, “Dahmer is going to be here.” I'd go, “Dahmer?” “Jeffery Dahmer.” Yeah, oh okay, I know him. Yeah he's good.

You got acceptance from other comedians.

Yes, so that's basically the whole story. God came in, yeah so creator of the universe, God.

You've made me laugh. What do your wife and kids do to make you laugh?

Oh, let’s see, my son who's very little he’s in Barnum and Bailey, he’s one of the midgets that runs around. This is absolutely true; one time I was in a restaurant and a midget came up to me and absolutely without joking said, “I'm your biggest fan.” I thought, “Oh no! Then I'm fucked. It's time to think about a different line of work.”