In a rare instance of positive environmental news, NASA observed the smallest ozone hole in decades 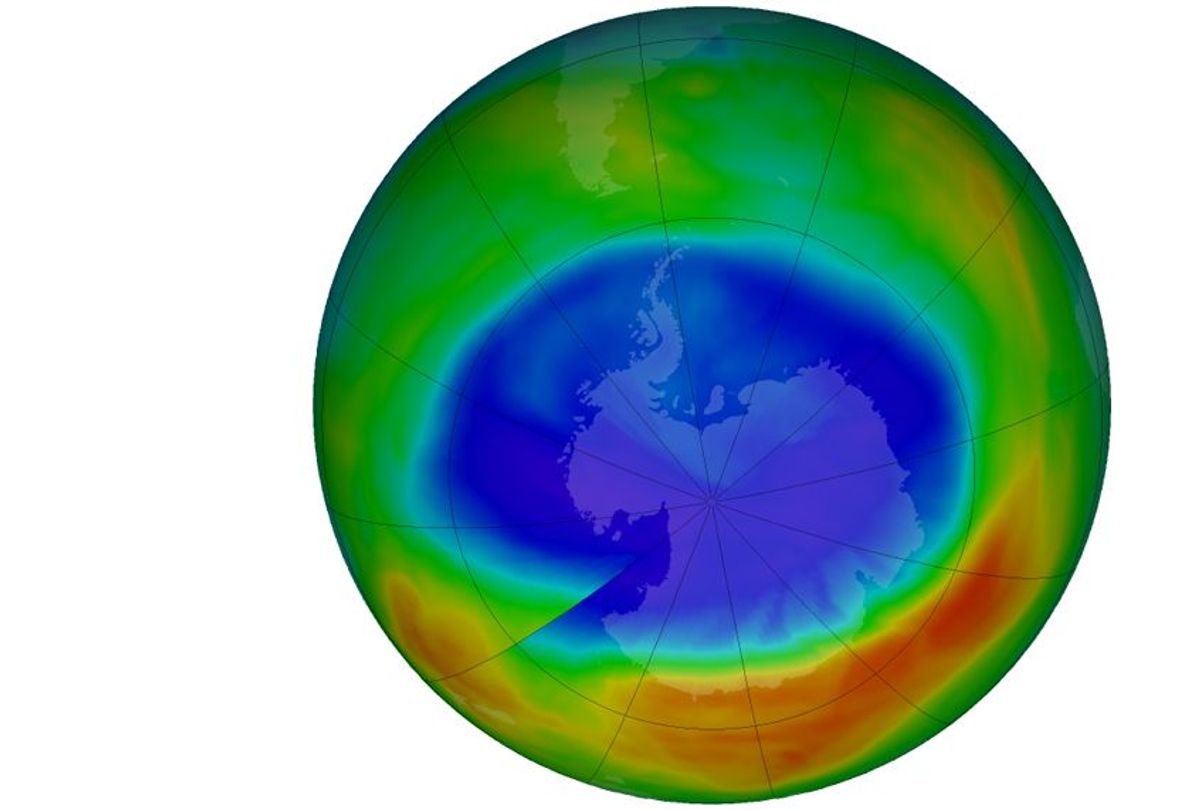 The massive hole in the Earth's protective ozone layer has shrunk to its smallest size since 1988, highlighting a rare piece of good news regarding the environment, and the further need for international cooperative agreements to combat the global threat climate change presents.

The ozone hole, which was largely caused by the release of synthetic industrial aerosols into the atmosphere, reached its annual peak on September 11, 2017, when it measured 7.6 million square miles, but then decreased for the rest of the month and throughout the month of October, according to a NASA press release.

"The Antarctic ozone hole was exceptionally weak this year," said Paul A. Newman, chief scientist for Earth Sciences at NASA's Goddard Space Flight Center. "This is what we would expect to see given the weather conditions in the Antarctic stratosphere."

One scientific reason behind the historically small ozone hole is that it was "strongly influenced by an unstable and warmer Antarctic vortex – the stratospheric low pressure system that rotates clockwise in the atmosphere above Antarctica."

NASA elaborated in a release:

This helped minimize polar stratospheric cloud formation in the lower stratosphere. The formation and persistence of these clouds are important first steps leading to the chlorine- and bromine-catalyzed reactions that destroy ozone, scientists said. These Antarctic conditions resemble those found in the Arctic, where ozone depletion is much less severe.

"The ozone hole over Antarctica is expected to gradually become less severe as chlorofluorocarbons—chlorine-containing synthetic compounds once frequently used as refrigerants – continue to decline. Scientists expect the Antarctic ozone hole to recover back to 1980 levels around 2070," the press release said.

If the Earth's ozone layer were to completely dissipate, more ultraviolet light would get through to the surface, increasing incidence of cancer and cataracts in humans and further warming the planet. A NASA simulation showed that, without an ozone layer, one would get sunburned after five minutes of standing outside in Washington, D.C. Likewise, skin cancer rates would rise drastically, possibly killing plants as well.

Positive news about the environment is rare these days. Yet the good news about the shrinking ozone hole exemplifies the importance of international cooperation in the vein of the successful Montreal Protocol. President Donald Trump has announced he would pull the United States from the Paris climate agreement, which would make the U.S. and Syria the only two nations who refuse to be signatories. Such international agreements are pivotal to assuring that climate change is dealt with.

Ironically, late on Friday afternoon, the Trump administration signed off on an extensive scientific report on climate change from 13 federal agencies. The report — which states that humans are the dominant cause behind global temperature rise — is not only a stark contrast to the Trump administration and the Republican party's stance on climate change, it proves their views to be scientifically inaccurate.