Why America rejects surrealism and “The Killing of a Sacred Deer”

Director Lanthimos' latest film joins “Get Out,” “Beatriz at Dinner” and “Mother!” in challenging the audience 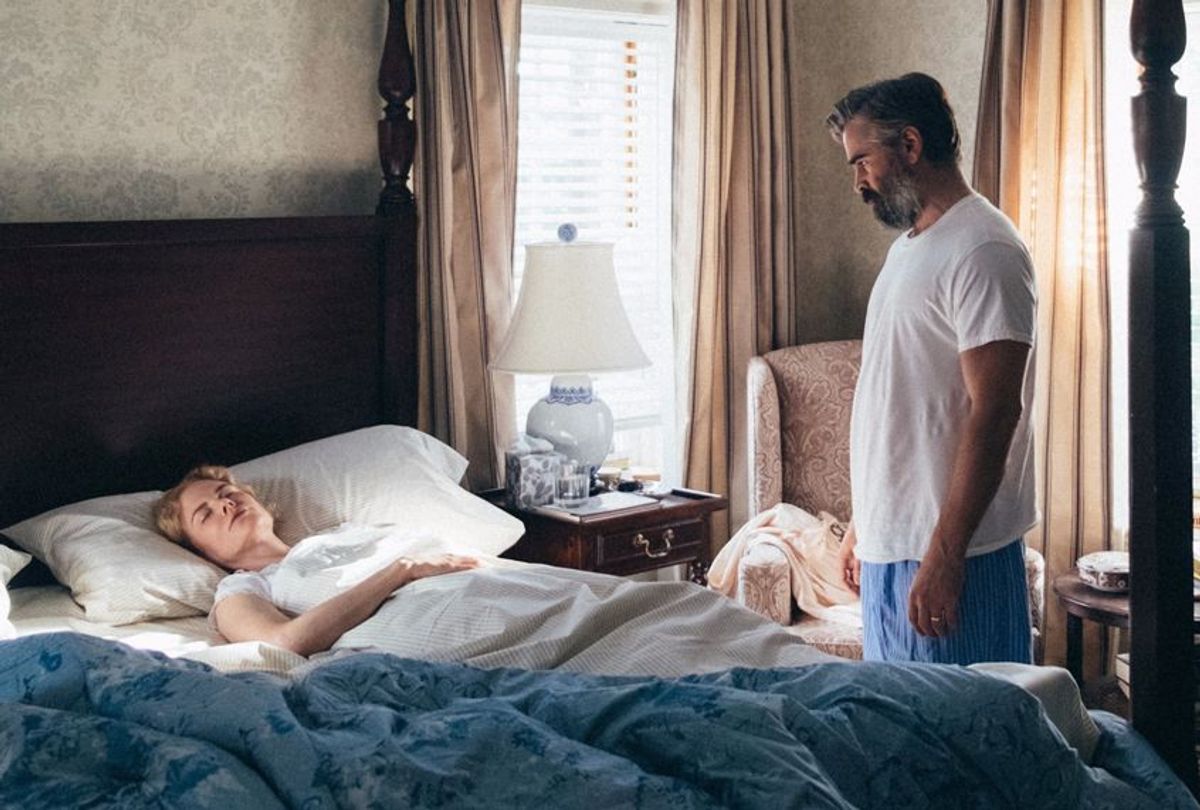 The Greek filmmaker Yorgos Lanthimos’s newest film, “The Killing of a Sacred Deer” (out Oct. 27), is about a man confronted with a nightmarish (and mythic) choice: kill his son, his daughter or his wife, or watch them all die slow horrific deaths.

But even before the nightmare unfolds, the film resembles a dream. In one of the first shots, said man, a surgeon named Steven Murphy (Colin Farrell), walks with his anaesthetist (Bill Camp) down a long, cream-colored hall in the hospital where they work; the camera captures the men head-on and moves with them, making it appear as though the hallway is infinite. And, as has become a hallmark of Lanthimos’s films (such as 2009’s “Dogtooth” and 2015’s “The Lobster”), the characters speak in a dry, uninflected rhythm; they say matter-of-factly what most people leave unsaid. “Our daughter started menstruating last week,” Murphy casually tells a colleague at a formal banquet, for instance.

While the deadpan tone of “The Killing of a Sacred Deer” is distinctly Lanthimos’s, the surreal sensation the film produces has been a prominent feature in the year’s cinema. “Get Out,” “Beatriz at Dinner” and “Mother!” have been among the other films released this year in which reality has been twisted and upended, in which viewers have been made to question, “Is what I’m watching really happening?”

These films come in surrealism’s centennial. The concept was coined in May of 1917, when the French playwright, critic and impresario Guillaume Apollinaire wrote in the program notes of Serge Diaghilev’s avant-garde play, “Parade,” that this new alliance of all the arts had “given rise, in “Parade,” to a kind of surrealism.”

Surrealism became a movement in the following years, born in part out of Dada, the satirical art of nonsense. Dada, and then surrealism, was a response to the vast death and destruction caused by World War I. “For many intellectuals, World War I produced a collapse of confidence in the rhetoric — if not the principles — of the culture of rationality that had prevailed in Europe since the Enlightenment,” Leah Dickerman, a curator for the National Gallery, once wrote in the Gallery’s catalog.

Dada was, in the words of the French art critic Gabrielle Buffet-Picabia (who was also the wife of the Surrealist artist, Francis Picabia), an effort “to replace the logical nonsense of the men of today with an illogical nonsense.” The aim of surrealism was similar. Surrealists invented techniques like automatic drawing and games like Exquisite Corpse to unleash the subconscious and allow randomness to reign.

In 1924, Andre Breton created the movement’s first manifesto, titled “Surrealist Manifesto.” He described surrealism as “pure psychic automatism, by which one proposes to express, either verbally, in writing, or by any other manner, the real functioning of thought. Dictation of thought in the absence of all control exercised by reason, outside of all aesthetic and moral preoccupation.”

The movement splintered and then dissolved in the intervening years. Today surrealism is primarily an influence. There is no real movement, only the methods and the recreation of surrealism’s effects.

Most of the contemporary films that we think of as being surreal are not surrealistic in the way Breton conceived the movement. Yorgos Lanthimos, for instance, did not forfeit control and employ automatism when making “The Killing of a Sacred Deer.”

Quite the contrary. In an interview last month, Lanthimos described his process to me as being guided by logic. His films often originate with a strange rule or an absurd scenario that he or his frequent co-writer Efthymis Filippou come up with and then blossom out rationally. “If you have the initial idea that seems interesting to you then you basically start solving problems with logic,” he said. “And where do you go from there? It's always a logical step. And because you've started with something maybe kind of absurd and surreal, the logic then continues that way.”

Filmmakers still portray the subconscious in film and create worlds where the boundaries between real and imaginary, high and low, life and death are erased. But with the exception of David Lynch, most contemporary filmmakers who infuse their work with the surreal do so, like Lanthimos, in a way that is considered and rational.

A century after the birth of surrealism, the nonsense of the world leadership is no longer even veiled in logic. The American president is a reality star whose dialect often mirrors Dada. The country’s governing body rejects science. Last year, British voters neglected warnings of sure economic collapse and elected to leave the EU. And with the rise of North Korea’s nuclear capabilities, the specter of nuclear war — an illogical proposition if there ever was one — hangs over much of the world.

In this landscape of illogical nonsense, the surreal has taken on a progressive logic. In “Get Out,” the eerily docile behavior of black people in a wealthy white suburb is the result of white people capturing, brainwashing and enslaving them. In “Beatriz at Dinner,” we watch Beatriz (Salma Hayek), an environmentally-conscious Mexican masseuse, fantasize about violently killing Doug (John Lithgow), a wealthy Trump-like conservative; instead, she walks into the ocean at the side of a highway and disappears. And Darren Aronofsky has said that “Mother!”, which finds a horde of guests visiting and proceeding to destroy Mother’s (Jennifer Lawrence) mysterious and isolated home, was intended to be an environmental allegory about humanity’s destruction of Earth.

These films reminded me of a conversation I had not long after the election with Daniel Kwan, the co-creator of “Swiss Army Man,” the movie in which Daniel Radcliffe very surreally plays a farting corpse. Kwan told me that the election affected what he wants to make going forward. “Our stuff is known to be weird and disruptive and kind of crazy, but that stuff doesn't really make sense to me anymore in the context of a post-Trump world,” he said. “I think a lot of our world was created in order to shake the boat and disrupt an industry that felt in some ways stagnant. And I think the world doesn't need that right now. Trump has already shaken that boat. I think right now what the world needs is a lot more healing.”

If Kwan is right and healing through art is what the world needs, “The Killing of a Sacred Deer” best be avoided. Lanthimos doesn’t let Steven Murphy out of his nightmare by waking up. The spell that is cast on his family cannot be broken. They can’t be cured through sound medical treatment, through money or by beating up the boy (played by Barry Keoghan) who cast the spell. Though this world is slightly detached from how we conceive of reality, there are rules all the same. I found the enforcement of those rules, in particular characters contending with the consequences of revenge, to be excruciating to behold in a way that was also satisfying. It felt real.