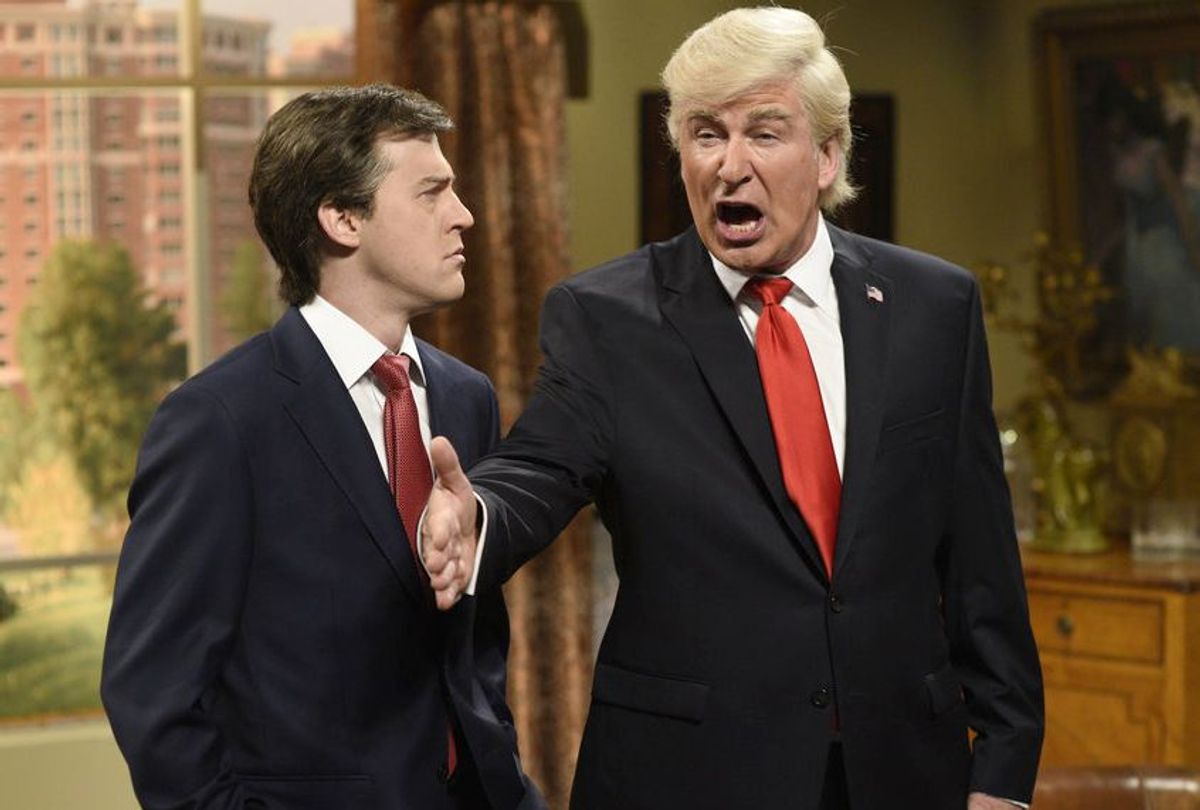 Throughout the 2016 presidential election, comedy was one of the key ways that we dealt with the absurdity of the Donald Trump campaign. Trump was especially easy to mock since he was already such a joke. In one scathing example, Stephen Colbert emerged from his break between shows to offer us a parody of Trump’s campaign announcement. And then, on his first night as host of “The Late Show” on Sept. 8, 2015, Colbert likened making jokes about Trump to binging on Oreos. He knew it was bad for him, but he couldn’t resist.

While there was plenty of Trump mockery during the campaign, it would be fair to say that Alec Baldwin’s impersonations of Trump on “Saturday Night Live” were likely the most well-known. Rather than make jokes about Trump, Baldwin embodied his hubris, stupidity and narcissism. Blustering and absurd, Baldwin’s Trump was only a slight exaggeration of what we had already witnessed.

The art of the "SNL" impersonations, though, was the brilliant way that Baldwin managed to channel the fact that Trump himself appears to be performing all the time. He already seems like a fraud and a phony. As I put it in a post-inauguration column for Salon about Baldwin’s impersonations, “it’s hard to mock a mockery” -- but Baldwin perfected it. He managed to do an amazing job of playing the fool while also exposing Trump as a farce.

And the fact that the impersonations bothered Trump, sending him into Twitter meltdowns, only served to make them even more satisfying and publicly significant.

So if Baldwin’s impersonations of Trump were smart and fun, then it would seem to make sense to take that comedic version of Trump and expand on it.

This is exactly what has happened with the new parody memoir penned by Baldwin and Kurt Andersen and released last Tuesday. “You Can’t Spell America Without ME: The Really Tremendous Inside Story of My Fantastic First Year as President Donald J. Trump” covers Trump’s first days as president.

For those of us who loved the Baldwin impersonations the new book was welcomed with anticipation, but unfortunately it misses the mark.

Baldwin describes the idea for the memoir as an accident, and that may well explain some of its flaws. Apparently he was at a sales brunch for the launch of his own memoir, “Nevertheless,” when folks asked what his next project was going to be. “I’m going to do a Trump memoir,” Baldwin blurted out, leading the room to erupt in applause. Baldwin leaned over to his literary agent and said, “I guess we should get on that right away!”

The idea was to go deeper into the Trump persona created by Baldwin. To do that, Baldwin contacted Andersen to write the book. Andersen seemed like a perfect partner for the project since he had recently released “Fantasyland: How America Went Haywire — a 500-Year History.” Andersen also famously co-founded Spy magazine, which from the mid-1980s through the early ’90s made a habit of skewering Trump.

“You Can’t Spell America Without ME” is fun and it definitely has some interesting ideas about what a self-reflective Trump might look like. It benefits from Andersen’s sharp wit and his decades of experience mocking Trump, dating back to his Spy magazine days, when they regularly referred to Trump as a “short-fingered vulgarian.”

The best parts of the book are when the parody cuts to the bone and Trump’s rambling, nonsensical gibberish is revealed as a potent mix of narcissism, stupidity and malice.

One especially disturbing, yet funny, passage has the parody voice of Trump writing, “I am a strong believer in sitting down personally with the people dying to work for me — eye to eye, face-to-face, kick the tires, give them the smell test. And the smell test part I mean literally." He then goes on to explain that winners have an aroma that is “kind of peppermint plus leather plus electrical fire or butane, but nicer, more like air conditioning.” The parody takes the disgusting and offensive and stupid image we have of Trump and expands on it — crossing a line we likely hadn’t ever imagined.

But in the end the book falls short, and that is because it is a parody that lacks irony, a key ingredient in satire. Satire is a specific form of comedy that is meant to call on its audience to think critically, to assess preconceptions, and to champion reason over folly. But rather than offer readers a satirical edge in the same way Colbert did with his own parody book based on his conservative pundit persona, “I Am America (And So Can You),” Baldwin and Andersen just take what we already know about Trump and make it worse.

Take this quote, for example: “I have the best words, beautiful words, as everybody has been talking and talking about for a long time. Also? The best sentences and, what do you call them, paragraphs.”

It’s funny. But it isn’t funny because it is ironic or satirical; it is funny because it is pretty close to an exact thing Trump would say. Irony requires a gap between the ironic comment and reality. Parody, meanwhile, can just be an exaggeration -- and that is what this book is. It is Trump as we know him, only Trumpier. And, while the book does imagine a future that seems unlikely, much of it reads as possible.

Some of the critical reviews of the book have claimed that the problem is its connection to the Baldwin impersonations. Jason Zinoman even speculated for Slate that Baldwin’s own ego merges with that of Trump’s and hurts the comedy.

But actually I’d say the problem is the reverse. The humor in the book isn’t as effective as Baldwin’s impersonations because it lacks the physical comedy of Baldwin doing Trump. When Baldwin impersonates Trump, just like when Tina Fey did Sarah Palin, the lines spoken are only slight exaggerations, but the satire comes from the irony of those things being parroted by a comedian.

Baldwin explained that the goal of the book was “channeling and amplifying the real Trump.” But an amplified Trump doesn’t offer the ironic distance needed to create a gap between comedy and reality. And it is that gap that fosters critical thinking and encourages the public to question the Trump-era status quo.

At a time when our nation risks falling into a dumbed-down stupor, we need the sharp wit of sarcasm to help maintain our cognitive health. But this book doesn’t offer an intellectual spark for our addled brains. Instead, it comes too close to numbing our minds even more as it gives us an inside look into Trump’s own arrogant, narcissistic, Swiss-cheese brain.

While Baldwin points out that most of the writing was Andersen’s, it is the photos of Baldwin as Trump that may be the weakest part of the book. That, of course, is the weird part. I’ve said that Baldwin impersonating Trump is an effective form of political comedy. But the photos of him as Trump in the book don’t work that way — they are just simple examples of making fun of a ridiculous-looking human.

In one especially low example, Baldwin appears as Trump sitting on the toilet. Revealing him in a supposedly vulnerable position does nothing productive comedy-wise and may even serve to distract folks from the very real ways that the Trump presidency is a threat to our democracy. The Trump in the book is plenty dangerous, but he is so absurd and so stupid and so paranoid that the Trump in the book loses his demonic reality.

Andersen is right that a book like this still serves to help those of us who are critical of Trump know “that there are other people tripping out.” And he is right that the book is not just pure mockery of Trump as an orange-faced moron, but the inside view into Trump’s thoughts that the parody memoir offers isn’t really insightful or critically powerful.

The book's flaws are a good reminder that all Trump comedy is not equal. Some of that comedy, like Hasan Minhaj’s brilliant monologue at the White House Correspondents’ Dinner, is exceptionally smart. There is a huge difference, for instance, between silly stunts like Jimmy Fallon messing with Trump’s hair and John Oliver zinging Trump with sharp satire and calling on us to “Make Donald Drumpf Again.” “You Can’t Spell America Without ME” falls somewhere in the middle of that spectrum. It’s not distracting fluff like Fallon, but it isn’t the productive satirical comedy of Oliver either.

Trump recently tweeted that he thought it was unfair that comedians are always going after him.

While Trump clearly has no clue what equal time means, he does have a point. Since the election, Trump mockery has only gone on the rise, making him the most mocked president of all time.

The important thing to remember is that we can only resist Trump if we refuse to be like him. That means that, even though all Trump comedy triggers the butt of the joke, we shouldn't forget that not all of it helps us deal with him.