Andy Weir's "Artemis": A sci-fi crowd pleaser made for the big screen

The author of "The Martian" has done it again, with a science-forward thriller set on a lunar colony 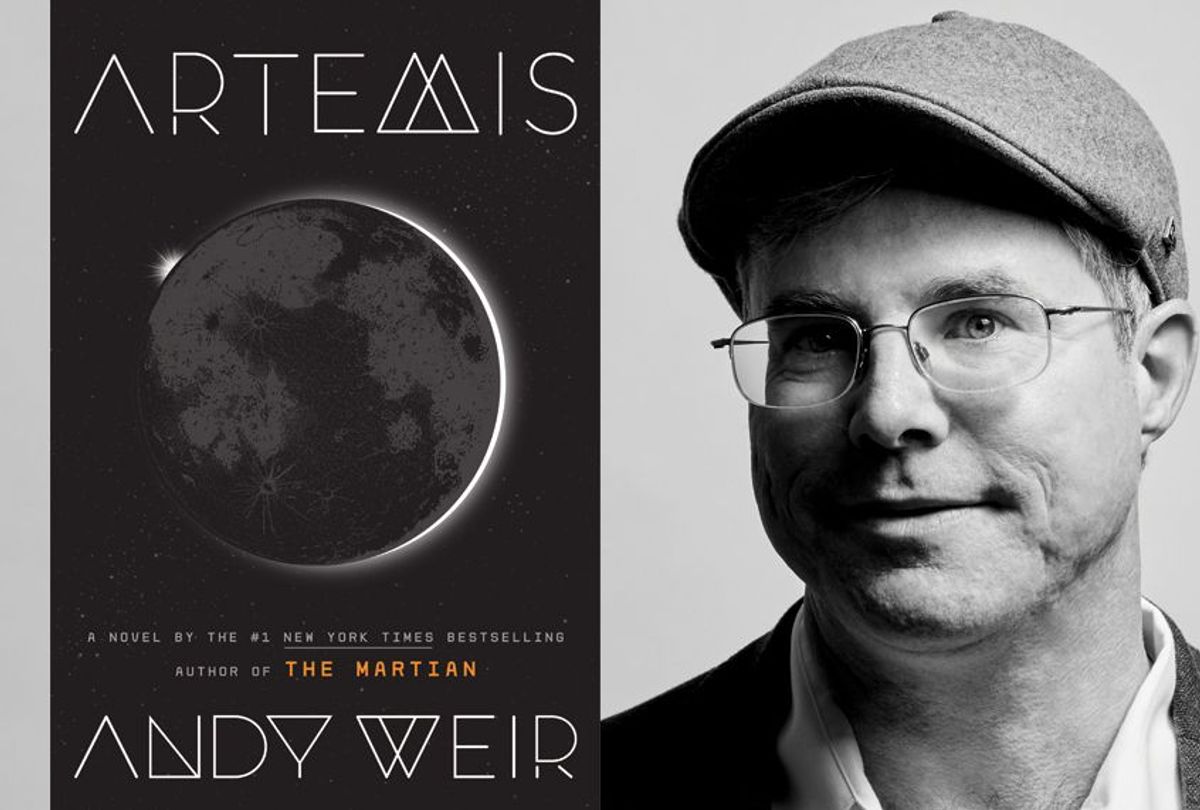 Hell yes, "Artemis" should be made into a movie.

It's not like I'm going out on a limb by saying that — Fox and New Regency have already acquired the movie rights to the novel (out Tuesday from Crown), and it was smart of them to do so. Not since the days of Michael Crichton has a novel so clearly been waiting to be adapted to the big screen.

"Artemis" was penned by Andy Weir, the same man who authored "The Martian," the 2011 novel which later became a critically acclaimed film, garnering seven Academy Award nominations, including a Best Actor nod for star Matt Damon, and is director Ridley Scott's highest-grossing film to date. The stories for both novels are on the cutting edge of sober science fiction — taking seemingly fantastical premises, like a man stranded on Mars or a small city on the moon, and grounding them by ensuring as much scientific plausibility as possible.

"Artemis" tells the story of Jazz Bashara, a young woman whose family immigrated to the lunar colony of Artemis from Saudi Arabia when she was a little girl. Although Bashara has dreams of making good money at a legitimate job, the story opens with her scraping out a meager living as a smuggler and hustler. Even worse, she has been estranged from her father and one of her closest friends, leading to an existential loneliness that she masks with dry, cynical wit.

After familiarizing readers with the ins and outs of life on the moon — class structures continue to remain quite rigid in Weir's version of the futuristic colony, although race relations have somewhat improved — the story kicks into gear when an entrepreneur offers Bashara an opportunity to become a millionaire with a single act of corporate sabotage. Things go amiss, uncovering a plot that Bashara soon learns threatens not only her life, but the well-being of every person who lives in the colony.

A realistic portrayal of science was one of the main appeals of "The Martian," and Weir smartly makes it a main selling point of "Artemis," too. Instead of fanciful space rays and transporter beams, "Artemis" offers a realistic look at the nitty-gritty of how real-world humanity would adapt to having to live in a colony on the moon. Everything from the growing political clout of multinational corporations to the cramped living quarters — issues reminiscent of current problems here on Earth — are covered. Weir's little touches are quite enjoyable, too —  how coffee and scotch would taste awful on the moon, how one devout Muslim finds a clever way to make sure that he is always praying toward Mecca.

Weir makes sure the crime caper is ultimately connected to the ways in which technologies used here on Earth could be rendered even more sophisticated if we had a lunar colony. "Artemis" is a solid corporate thriller grafted on to the moon. But while I soaked up every word of Weir's world-building, the action scenes are mostly predictable. His excellent employment of technical details often outshines the plot.

Overall, the book is reminiscent of Isaac Asimov's "Fantastic Voyage." Just like that story is at its strongest when it's exploring the human body as a setting for a marvelous adventure, "Artemis" is at its best when it has our main characters traversing the lunar surface or offering deep-dish analysis of the technology that would make living on the moon into a sustainable proposition. After all, it isn't every day that you read about the practical inconveniences of moon dust or the economics of manufacturing air in a lunar environment.

Jazz Bashara makes for an intriguing protagonist, and the fact that she is a smart, bold and funny woman from Saudi Arabia redounds to the book's favor. A strong and intelligent woman of Middle Eastern descent serving as protagonist for what looks poised to become a big-budget studio film will be welcomed by audiences hungry for diverse blockbuster heroes. Overall, "Artemis" is a smart and sharp novel, and Fox would be crazy not to put its full weight behind a big-screen adaptation. In a year when we've just seen our fifth "Transformers" movie, I am desperate to see that happen.

Tune into SalonTV's live interview with Andy Weir on Wednesday, November 15 at 11 a.m. ET / 8 a.m. PT, streaming live on Salon.com and on Facebook.