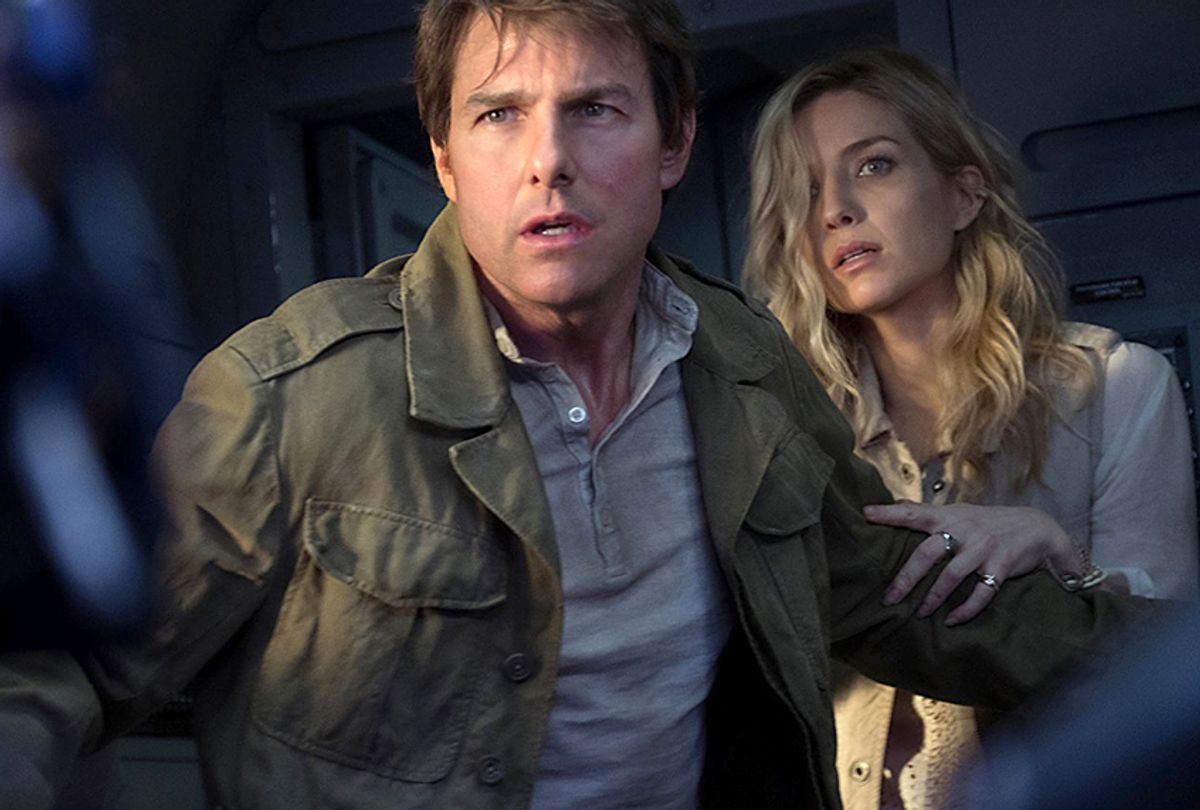 Tom Cruise and Annabelle Wallis in "The Mummy" (Universal Pictures)
--

Last week The Hollywood Reporter revealed that Universal's so-called "Dark Universe" — a planned cinematic universe containing classic Universal monsters like the Mummy, the Bride of Frankenstein, the Invisible Man, the Wolf Man, the Creature from the Black Lagoon and others — had been effectively cancelled. No official corporate obituary has been issued yet, of course, but with the producers cleared out and all impending projects in stasis, it's fair to assume that the planned universe has been abandoned.

Where did they go wrong? There are actually so many ways, that it's easier to straight-up list them.

As I noted in my review of "The Mummy," the biggest problem with this film is that it felt like it was made by a committee. Instead of trying to tell a good story of its own — whether atmospheric and scary like the 1932 movie or action-packed and campy like the 1999 remake — this version spent more time trying to set up future Dark Universe films than being a memorable or even simply enjoyable flick of its own. When you look at movies that successfully launched modern cinematic universes — "Iron Man" in 2008, "Star Wars: The Force Awakens" in 2015 and so on — they were fun, well-crafted movies on their own that subtly planted the seeds for sequels and spin-offs. Even though the studios were planning future movies while creating the original films, they still clearly took the time and energy to attach strong storytellers (Jon Favreau, J. J. Abrams) to those projects so that they would stand on their own terms. By contrast, "The Mummy" threw everything trendy it could think of at the screen in the hope that as much of it as possible would stick. Because it had tried to stuff in so many different genre identities, it wound up lacking any distinctive mark.

2. There was no indication that anyone was clamoring for a Universal Monsters universe.

Once again, the success of the Marvel and Star Wars universes come to mind. While Iron Man and Thor may not have been particularly popular characters among casual moviegoers prior to their films, the massive successes of the "X-Men" and "Spider-Man" films had clearly established that audiences had an appetite for superhero fare. While trying to create new fanbases for more obscure characters was a risk, it was at least grounded in recent box office trends. Similarly, even though the "Star Wars" prequels wound up being maligned by fans as vastly inferior to the original trilogy, they still made bank at the box office, indicating that fans still wanted to see new installments in that universe. By contrast, the last Universal monsters property that had done well was the original "Mummy" trilogy, and even that had done little to drum up enthusiasm for more Universal monster films.

3. They don't understand what audiences want in horror movies.

Yes, I'm not entirely sure "The Mummy" even wanted to be a horror film (which was part of the problem), but let's assume for a moment that the Dark Universe actually wanted to deal with the darkest of all popular genres. There is a template that they could have followed — "The Conjuring," which between its wildly successful sequel and "Annabelle" spin-off series is well on its way to launching a cinematic universe of its own.

What did "The Conjuring" do right, at least from a box office perspective? (I'll refer you to a review by my colleague Andrew O'Hehir for a discussion on the film's artistic merits.) For one thing, it was helmed by a man with a proven track record of success (James Wan of "Saw" and "Insidious"). It also dealt with a sub-genre that had already been proved popular (ghost films like "Paranormal Activity" and, again, "Insidious"). Finally, and most importantly, the producers took the time to see if there was a high audience demand for more movies in this universe before actually trying to make said universe.

As I noted in my review for "Thor: Ragnarok," 2017 has been something of a redemptive year for American moviegoers. While it's too soon to say whether this is a fluke or something more lasting, it's clear that the public has grown adept at sensing when a film is more of a product than a work of art. This isn't to say that every Hollywood movie isn't first and foremost a business venture (thinking otherwise would be flat-out naive), but there is an important distinction between the ones that were still fueled by a vision and those which are artificial right down to their core.

"The Mummy" fell into the latter category and audiences, to their credit, picked up on that. If the movie had only been made with the passion of an "Iron Man" or "Star Wars: The Force Awakens," I wouldn't need to write an article about a failed universe but could instead celebrate the launch of an exciting new world of gods and monsters.