Worshiping the intelligence community is not "resistance"

Trump's comments in Asia are an abomination, but let's not give the CIA and NSA a pass on their actual record 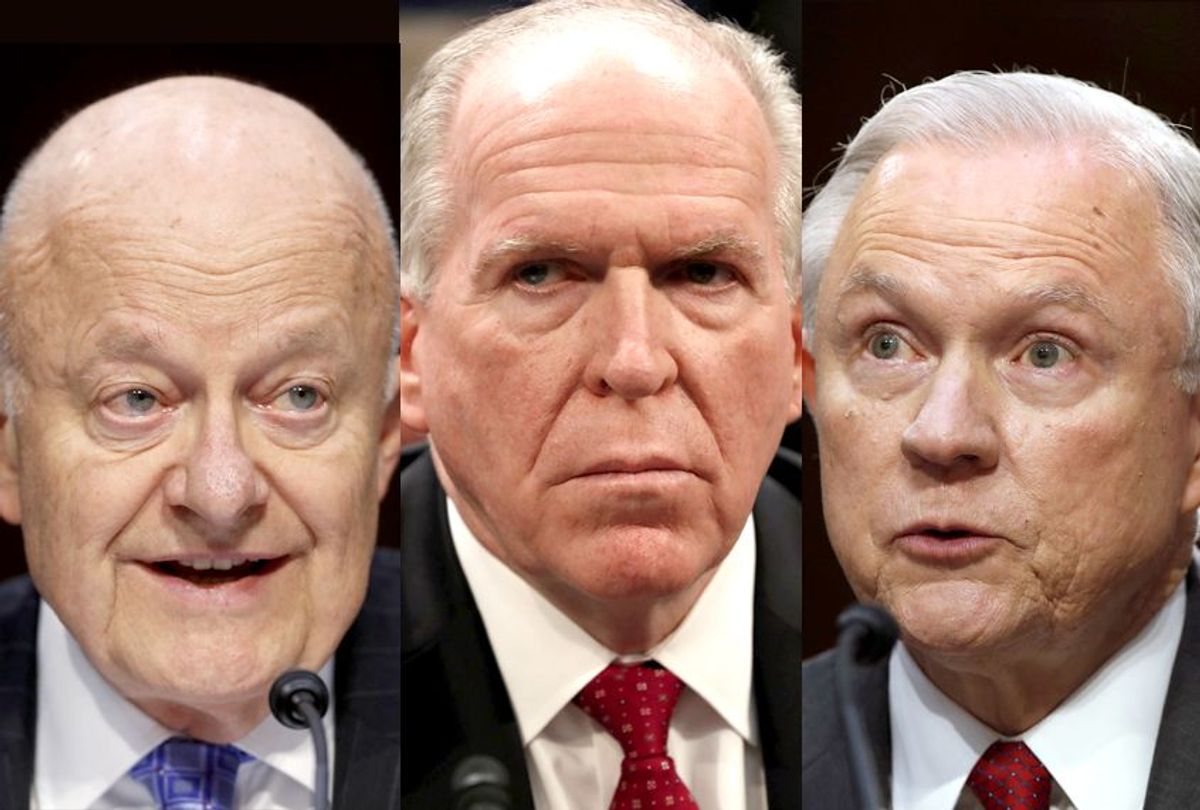 President Trump has received plenty of criticism for his embrace of strongmen during his first foreign trip to Asia, and rightly so. He’s cozied up to China’s Xi Jinping, laughed when Philippine President Rodrigo Duterte referred to the media as “spies” and called North Korea’s Kim Jong-un “short and fat” on Twitter, while simultaneously bemoaning that the two aren’t friends. It’s been a surreal and disturbing display of the type of power this president respects.

Nothing has sparked more outrage at home, however, than Trump’s remarks about the U.S. intelligence community. Before half walking back the proposition that he believes Vladimir Putin when the Russian leader says he had nothing to do with 2016 election meddling, Trump referred to former CIA Director John Brennan, former Director of National Intelligence James Clapper and former FBI Director James Comey as “political hacks.”

The entire episode emphasized yet again that Trump refuses to acknowledge the intelligence community’s assessment that the Russian government interfered in the 2016 presidential election on his behalf. Agreeing with that conclusion would throw Trump’s victory, and therefore the legitimacy of his position, into question. It would also bring added attention to the investigation into possible collusion between the Trump campaign and the Russian government, which the president has consistently aimed to discredit as politically motivated, and may well have tried to obstruct.

Trump’s interests are clear enough, but in response, Democrats and the media have gone too far in holding the intelligence community up as a beacon of honesty worthy of our unquestioned loyalty. Appearing on CNN’s State of the Union on Sunday, John Brennan said that “to impugn the character of somebody like Jim Clapper — on Veterans Day — who has dedicated so much of his life to this country, I just find that outrageous, and it’s something I think that Mr. Trump should be ashamed of.” The statement was widely shared on Twitter and repeated in broadcasts.

Let's remember: Clapper lied under oath when testifying before Congress about NSA surveillance. Brennan was not only dubbed Obama’s “drone czar,” overseeing extrajudicial killings of American citizens in Yemen and denying civilian casualties in Pakistan, he also defended the Bush administration policies of torture and extraordinary rendition, and oversaw the CIA when it spied on the Senate Intelligence Committee.

Skepticism towards the intelligence community is not only allowed, but well deserved. We should be able to express outrage at the president for undermining his own government while on a foreign trip -- and siding with a foreign leader and former KGB spy over the people who work for him -- without lapsing into amnesia about the CIA and NSA’s sins because that seems convenient to this political moment. We can respect and honor men and women who work in the interest of America’s national security without freeing their leaders from the standards of integrity they are expected to uphold.

In the same way that Barack Obama’s presidency shone a light on the tribal hypocrisy of liberals who refused to criticize his troubling civil liberties record, Trump has exposed a Democratic willingness to embrace the same people we castigated just a few years ago, as long as that comes wrapped in the flag of “resistance.”