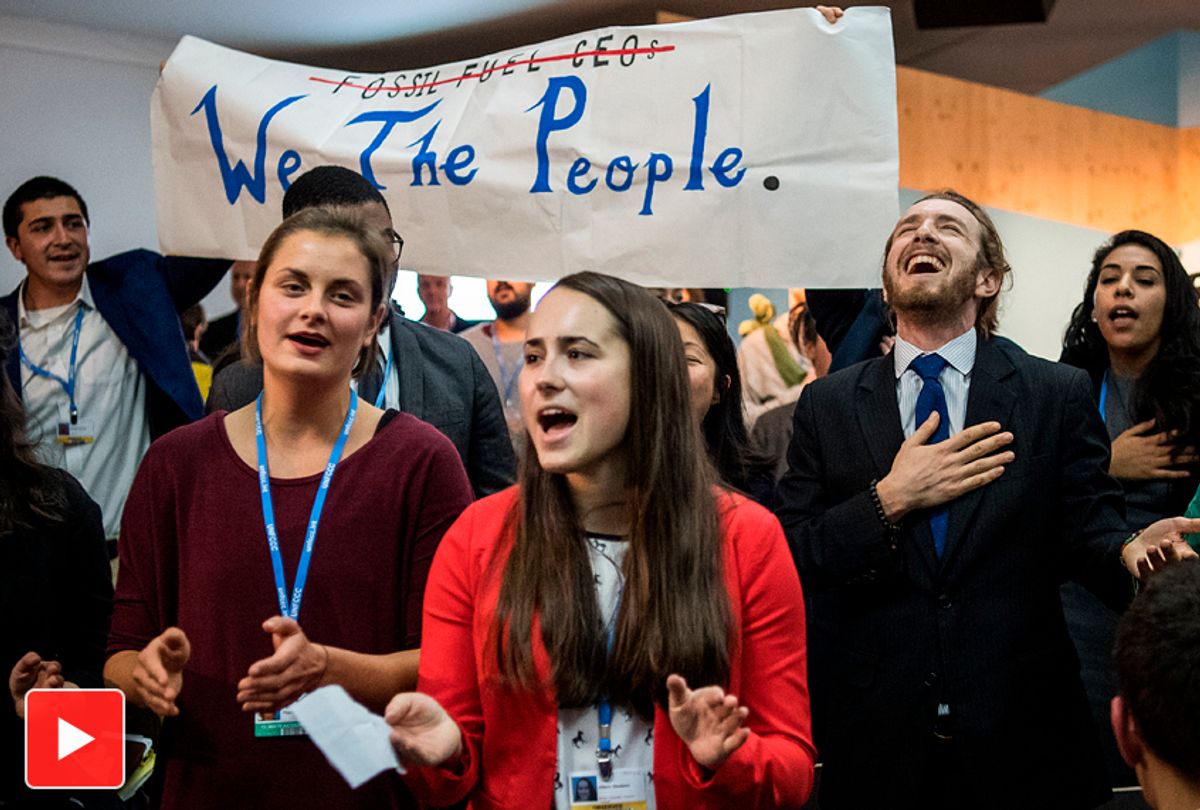 Fossil fuel industry executives got a cold reception at the UN Climate Change Conference in Bonn, Germany. Activists disrupted a panel about the role of “cleaner and more efficient” fossil fuels and nuclear power in “climate mitigation” by chanting, singing songs and then staging a walk-out that left the room mostly empty.

The panel was the only official event organized by the Trump administration for the two-week long conference that includes representatives from nearly 200 countries. The discussion was led by George D. Banks, the special adviser to President Trump on international energy issues, who argued that fossil fuels are here to stay and that the panel was, “controversial only if we chose to bury our heads in the sand.” Other participants included executives from Peabody Energy, a coal company, Tellurian, a liquified natural gas exporter and NuScale Power, a nuclear engineering firm.

The activists sang to the tune of the song “God Bless the USA," but refashioned the lyrics to say:

So you claim to be an American, but we see right through your greed.
It’s killing all across the world for that coal money.
And we proudly stand up until you keep it in the ground.
Let the people of the world unite, and we are here to stay.

There are multiple delegations representing the United States at this year’s summit in unofficial capacities, serving as a rebuke to the Trump administration. A coalition of U.S. lawmakers, faith leaders and universities are in attendance, as well as environmental advocates calling themselves “The U.S. People’s Delegation,” made up of organizations like 350.org, SustainUS and Native American activists.

President Trump’s decision to withdraw from the Paris Accord sparked global condemnation, but nations in attendance at this year’s conference have pledged to push ahead, despite the United States’ absence. Syria announced at this year's conference that it will sign on, leaving America the only country out of 194 to opt-out of the agreement. The treaty aims to keep temperatures from rising more than two degrees Celsius, the bare minimum to avoid catastrophe, according to climate scientists.

Activists have staged multiple actions at the #COP23 conference, including disrupting a speech by California Governor Jerry Brown due to his refusal to ban fracking in his state. Brown has been a vocal critic of the Trump administration on climate policy and has made multiple international stops pledging his commitment to curbing emissions in the face of lacking leadership from the White House. His spat with protesters shows the divisions that exist within environmental circles on how far to go in addressing the problem.