Talk about a war on Christmas 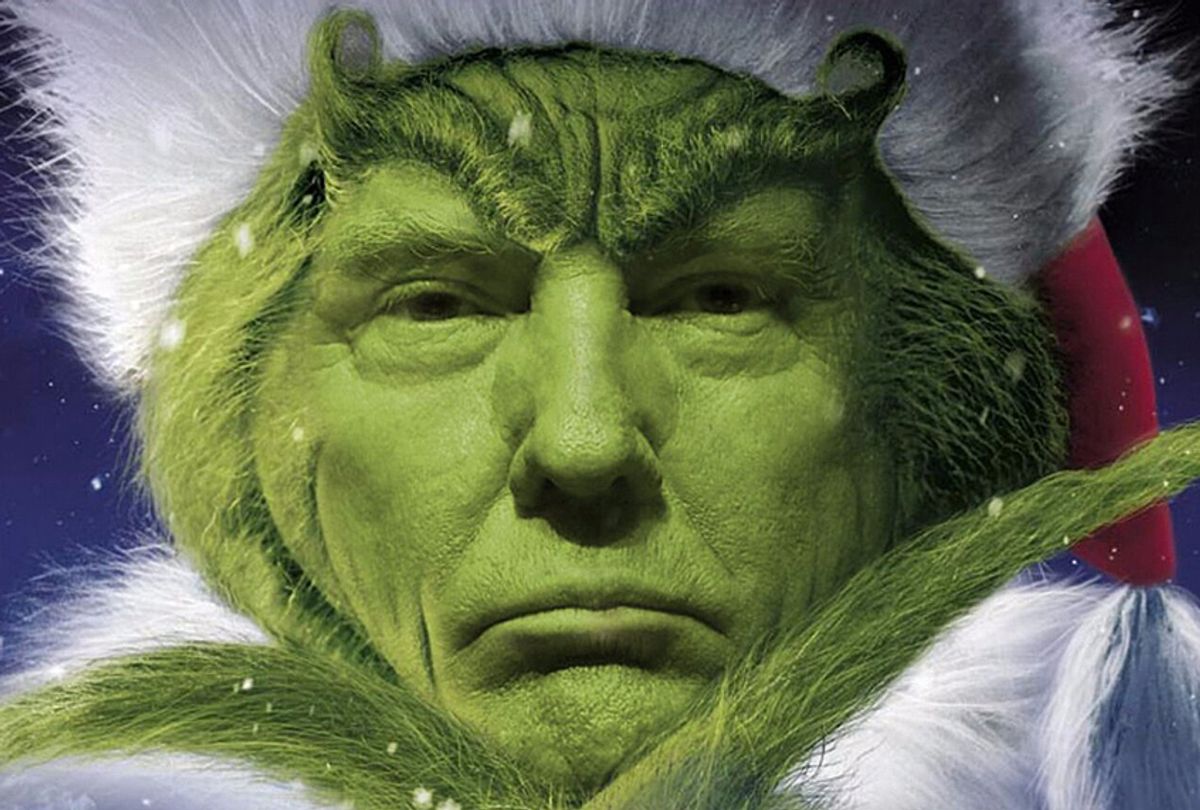 Joe Scarborough, noted sweater wearer, former Trump stan, and the unctuous host of "Morning Joe," has announced that he will be releasing a three-song Christmas EP centered around the current president of the the United States, thus rendering lumps of coal only the second-worst thing you can put in a stocking this season.

Titled "A Very Drumpf Christmas" in reference to the traditional, old-country name of the Trump family, it is described by Business Insider as "complete with sleigh-bell jingles, lyrics about reindeer, and a track titled 'The Drumpf,' a jazzy, ballad-tempo cut seemingly indebted to 'You're a Mean One, Mr. Grinch.'" Other songs include "Christmastime" (get it?) and "This Christmas It’s You & Me." The EP's cover art is an image of the president rendered as the character The Grinch as portrayed by Jim Carey in 2000's "Dr. Seuss' How the Grinch Stole Christmas" because of course it is.

The short-form release seems to be part of Scarborough's promise (threat?) to offer an EP of original songs every month. In recent years, the former Republican congressman has worked hard to become a prolific singer-songwriter, though no one seems to have asked him to do so. In June of this year, he released his first album, "Mystified," containing a selection of what he claims are over 400 tracks he's written.

Somewhat to the host's credit, Variety's Chris Willman wrote at the time, "while 'Mystified' may surprise some comers by how low it rates on the vanity-project embarrassment scale, it reveals Scarborough as a highly aware mimic without any particular identity of his own." Willman added, "At times, it sounds like Scarborough wants to be the GOP Lou Reed, peppering the lyrics of 'Girl Like That' with Manhattan-specific lines about femmes fatale who 'spent the summer chasing hedge fund boys, doing nails at Avenue,' or the one who 'gave me what I needed in a pickup truck, then she locked me in the Boom Boom Room.'"

Such assessments of a certain basic competency suggest a departure from Scarborough's much-reviled 2012 antiwar 9/11 tribute single, "Reason to Believe," which you can listen to here, though it's probably better if you didn't.

"A Very Drumpf Christmas" lands this Friday, if should you be interested in ruining your holiday or gifting it to your least favorite family member. There is as of yet no notice on what, if any, music the now-former Republican will release either in December or in the coming new year, so we have that to look forward to.