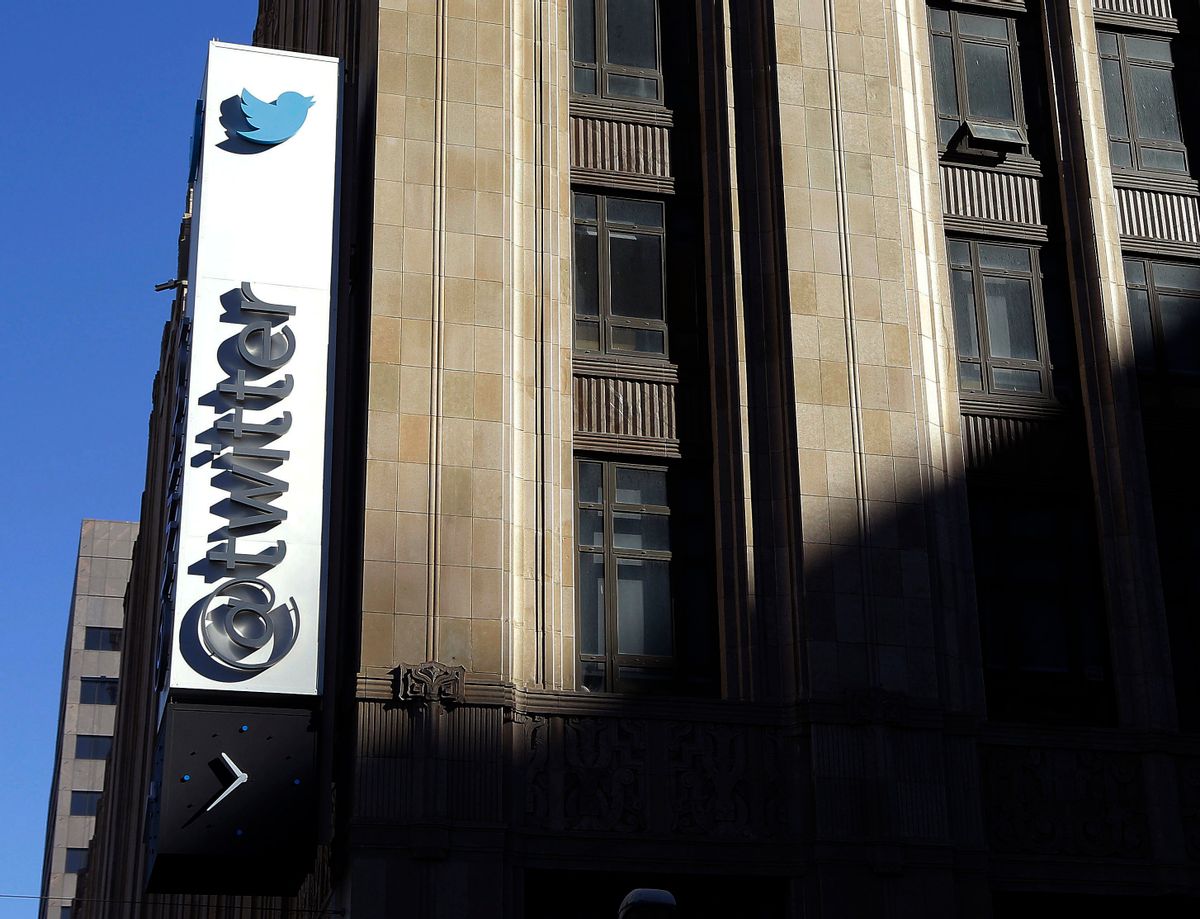 FILE - This Nov. 4, 2013, file photo shows the sign outside of Twitter headquarters in San Francisco. Twitter announced Wednesday, March 1, 2017, it is adding more new tools to curb abuse, part of an ongoing effort to protect its users from hate and harassment. It the second time in three weeks the company has released new features aimed at rooting out abusive content, signaling that it’s getting more serious about the issue after being criticized for not doing enough in the decade since its founding. (AP Photo/Jeff Chiu, File) (AP)
--

After backlash over a corporate decision to bestow higher-ups of the "alt-right" and white nationalist movement with "verified" status on Twitter — granting them certain privileges off-limits to casual users — Twitter brass suddenly changed their tune. The social media company abruptly and unceremoniously removed the verification signifier for these accounts and announced that they had changed their standards for verification.

“Verification has long been perceived as an endorsement. We gave verified accounts visual prominence on the service which deepened this perception,” the company wrote. “We should have addressed this earlier but did not prioritize the work as we should have.”

Twitter's new rules regarding verified accounts include not using misleading names or faking identity, and not promoting hate speech against race, ethnicity, gender, religion, sexuality or supporting organizations that could promote violence against others.

Before these new standards were enforced, Twitter gave verified status to "alt-right" celebrities like Richard Spencer, who self-identifies both as "alt-right" and as a "white identitarian"; Jason Kessler, who organized the Charlottesville Unite the Right rally that erupted in violence; right-wing media figure Laura Loomer; and "alt-right" darling Anthime Gionet, better known by his handle "Baked Alaska," who was suspended completely from Twitter for multiple infractions, including tweeting out a notorious white supremacist slogan.

Twitter has been a crucial organizing tool for many far-right and "alt-right" figures — including, arguably, the president himself, who has been vocal about the free publicity he gets from Twitter. Predictably, those on the far-right and "alt-right" whose Twitter accounts have been affected have been up in arms over the corporate policy change; some on the right are now claiming that Twitter's policy change undermines free speech — although as a private business, Twitter does not have free speech obligations under the First Amendment. This did not stop people like Spencer, Kessler and Loomer from reacting to the new rules in aggrieved tones.

And so it begins. Twitter is quick to call me and others Nazis, but they are literally trying to eradicate my presence. Just like Hitler.

And then she leaned into it.

Her coevals were similarly upset.

After November 15, if you're on the right and still have a blue check mark, it means you're...

Twitter claims to be taking away my verification to minimize racial hatred. Read the comments in this thread where people are telling me to peel off my skin because I'm white. Whites need ethnic consciousness! twitter.com/TheMa...