Al Franken must go: It's the right way to help women and protect Democrats

Republicans are eager to claim liberal hypocrisy and a double standard. To defeat them, Franken needs to quit 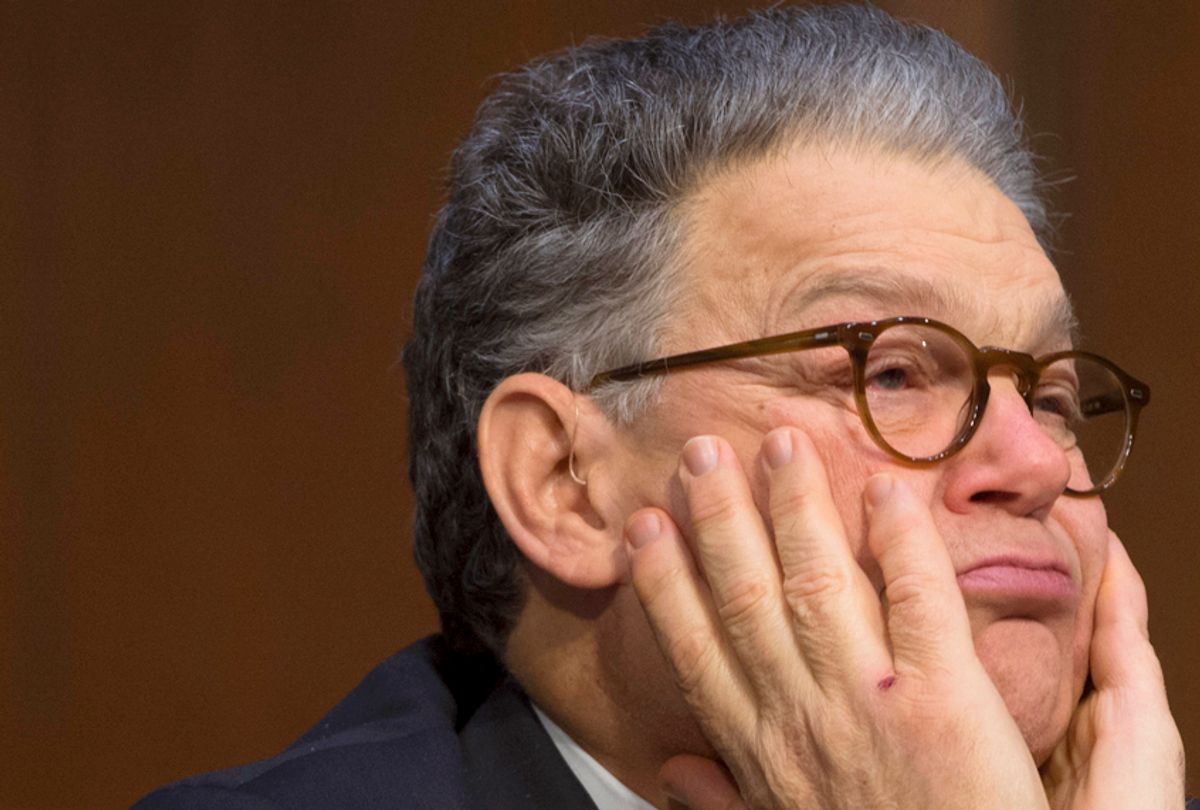 Before the allegations became public, notorious dirty trickster Roger Stone sent out a tweet saying, "Franken next in long list of Democrats to be accused of 'grabby' behavior." Franken's accuser, a radio host named Leeann Tweeden, is a conservative who been a frequent guest commentator on Sean Hannity's Fox News show. Tweeden hit the interview circuit in a polished manner that felt more like a promotional tour for a book or a movie, rather than the raw and amateurish interviews you usually get with women bringing forward these kinds of accusations.

If there weren't photographic evidence to back Tweeden's claims, it would be easy to dismiss this whole thing as a stunt designed to distract the media from allegations against Moore and to give cover to Republicans who want to continue supporting him. Now any Republican who is asked about Moore can simply deflect the question by invoking Franken and suggesting that both sides do it. Donald  Trump, in particular, is a fan of this what-about-ism technique, which is also favored by Vladimir Putin. Unfortunately, it's extremely effective.

This is one of those rare situations where two apparently contradictory things could be true. This may well be a Stone-style political stunt and Tweeden may be telling the truth about Al Franken's sleazy behavior. That's why I haven't wavered in my belief that the right move, both morally and politically, is for Franken to resign his Senate seat immediately and for Minnesota Gov. Mark Dayton to replace him with one of the many fine progressive politicians from his state, such as Rep. Keith Ellison or state Attorney General Lori Swanson.

That sense that the campaign against Franken is an orchestrated dirty trick is clearly fueling a lot of reluctance on the left to cut Franken loose. Feminist writers I usually agree with, such as Kate Harding and Joan Walsh (the former editor of Salon), have argued that, on this allegation alone, Franken should not be forced to quit the Senate. I am usually one to argue that Democrats should dig in their heels in when Republicans pull these kinds of stunts. In the past, caving to Republican demands to defund ACORN or fire Shirley Sherrod turned out to be huge political and ethical errors, when it was later revealed that the supposed scandal that led to these decisions were faked by conservative media operators.

But Franken has basically admitted the photo of him "jokingly" groping Tweeden while she was asleep on an airplane is real. In that light, his best move is to take one for the team and resign. Finding gainful employment, somewhere in the crossover zone between politics and entertainment, should not be a problem.

If this is a political stunt, then the people behind it surely want Franken to stay. Tweeden made a big public show of forgiving Franken and asking him to remain in the Senate. That could be sincere, or it could be that Tweeden and her friends in conservative media believe that Republicans will reap maximum benefit from Franken staying put.

If so, it's hard to deny that they're being crafty. Every day Franken remains in the Senate as a visible symbol of liberal hypocrisy, Republicans get a free pass to grope, harass and abuse women. Any effort by journalists or Democrats to hold them accountable will be met with, "What about him?" Even misogynist legislation, which Republicans love more than dogs love their owners, will prosper under the Al Franken shield. If Sen. Kristen Gillibrand tries to pass more anti-rape legislation, too bad! Why? Al Franken!

Republicans have been desperately hoping for a Democrat they could point to who has engaged in non-consensual sexual conduct. They've been dining out on Bill Clinton for two decades now, even though his actual transgression — not the ones from the fever swamps of right-wing conspiracy theories, but the one for which there is credible evidence — was a consensual affair with an adult woman who, to this day, refuses to play along with right-wing nonsense. It's thin gruel indeed, but the Franken matter offers them something with a little meat.

The grim fact of the matter is conservatives can't defend their own values, especially around gender, on the merits. So they're forced to rely on allegations of liberal hypocrisy as their main rhetorical weapon. That's why, as Justin Peters recently pointed out on Trumpcast, a large proportion of Fox News programming is based on stories of liberals supposedly failing to live up to their own values. The narrative can be summed up as, "Sure, equality and fairness and justice sound nice and all, but no one can actually live that way."

If Franken apologizes for his misdeeds and resigns from the Senate, on the other hand, that sends a message that liberals actually do live up to those values — and that other people can, as well. The most immediate effect would be to redirect attention back to Roy Moore's long and troubling record of sexual misbehavior. The long-term political benefits would be considerable, in that liberals would maintain the moral authority to denounce every Republican, including Trump, who is accused doing something similar.

There's a moral component to this, as well. If Al Franken is largely shielded from consequences, because he's a beloved Democrat who supports a wide range of progressive causes, that sends a message to future victims of sexual harassment that coming forward is not worth it. Preserving Franken's seat in the Senate -- since his replacement, in this context, will clearly be another Democrat -- isn't worth the long-term harm this could do to women.

As I wrote on Thursday, the only realistic way to reduce the incidence of sexual harassment is for harassers to face consequences. Ideally, they would face those consequences in public view, to send a signal to other would-be harassers that the risk of losing their jobs might not be worth the momentary pleasure of dominating and humiliating another person. There's an opportunity here for Al Franken to do something substantive to make amends and protect women. He should resign from the Senate.