Ben Affleck tells Colbert he wants to be "part of the solution" to harassment, and that's a problem

The "Justice League" star talks a good talk, noticeably leaving out any mention of his brother 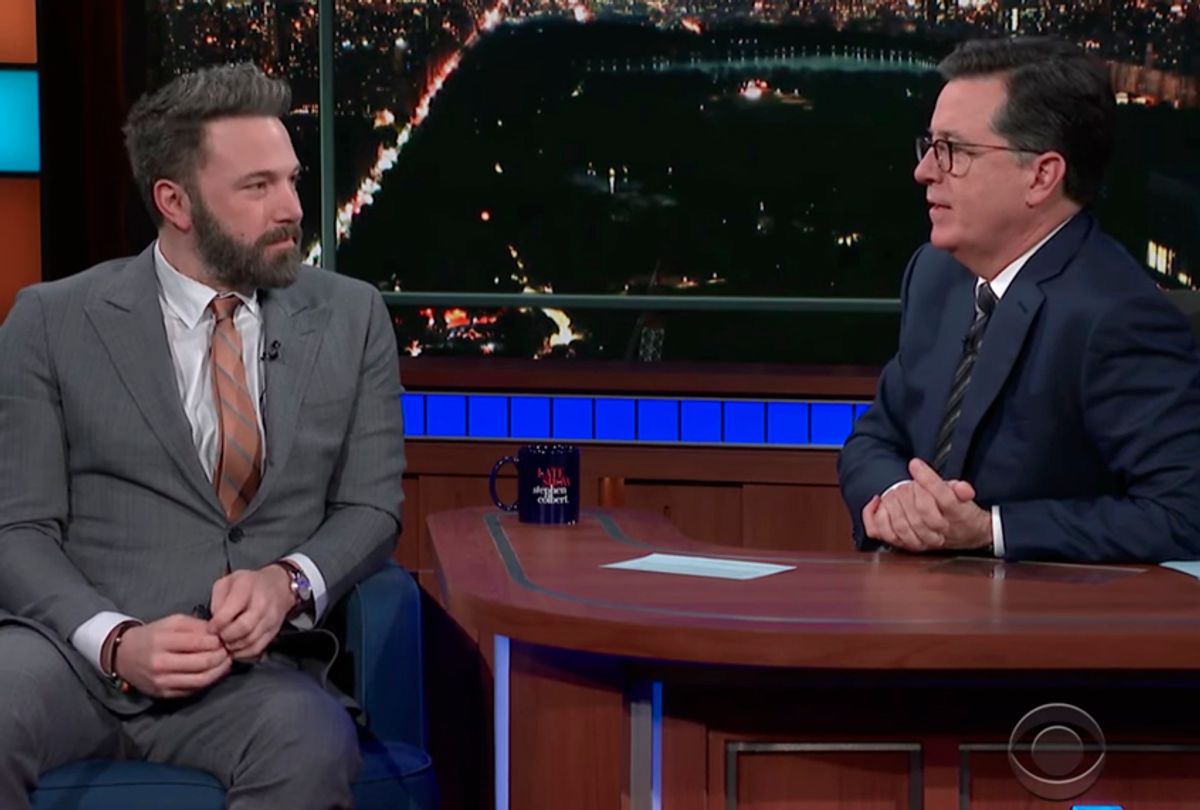 Promoting the premiere of "Justice League," star Ben Affleck joined "The Late Show with Stephen Colbert," Thursday night. predictably, the conversation turned to the onslaught of sexual harassment allegations against so many of Hollywood's power players, including Affleck himself.

Affleck was accused himself by former "One Tree Hill" star Hilarie Burton, who said he groped her in 2003 when she was a host of "TRL." He apologized on Twitter. On top of this, two other women have alleged he groped them during off-camera incidents and video of him being notably misogynistic to a Brazilian journalist has resurfaced.

While Colbert brought up the TRL encounter, he did not follow up about any of the other women that have accused Affleck nor the very serious accusations against his brother, Casey Affleck.

"It’s just a tricky thing to try to handle," Affleck told Colbert. "The most important thing to do is to support the voices coming forward, believe them and to create a business where more women are empowered and in place so less of this happens, and so there is a way of reporting this stuff that people can feel safe doing."

"I thought I had a sense of the scope of the problem and I thought I understood it and the truth is, I really didn’t," Affleck said. "I didn’t understand what it’s like to be groped, to be harassed, to be interrupted, talked over, paid less, pushed around, belittled — all the things that women deal with that for me, as a man, I had the privilege of not having to deal with."

Now disgraced producer Harvey Weinstein — himself central to the current wave of allegations that has made its way from Los Angeles to Capitol Hill — was instrumental in Affleck's career. The actor has stumbled in the past to distance himself from Weinstein, but Affleck seemed more sure of his stance this time around on and said he was donating his residuals from all the Miramax films he's participated in to sexual assault organizations.

This is all well and good, but through some of his comments, Affleck seems to try to paint himself as the reluctant leader of a new movement of male awareness and responsibility, something that deflects his own offenses.

"Part of this, for me, has been listening to people I really care about and love as they tell me stories of stuff that’s happened to them," Affleck said. "This is men and women — and recognizing that this is a real thing." He added, "I’m not a spokesperson, I’m not a superhero, I can’t change it by myself. I can just be accountable for myself and for my actions."

Affleck denies he's a "superhero" as if someone out there believed he that was. Dear men, no one thinks you're a noble superhuman for condemning the sexual misconduct of others or apologizing for your own. That's the bare minimum that being a person demands.

Yes, Affleck's comments are generally more thoughtful than many of this previous statements on the matter. Yet, he also seems to clothe himself in the language of listening and wokeness to an extent and, perhaps, may even be (accidentally) trying to take the reigns of at least the male side of the reaction to systemic misogyny.

To show just how off he may be, Affleck downplayed the allegation against him.

“What I was accused of by a woman was touching her breast while I gave her a hug. I don’t remember it but I absolutely apologize for it,” Affleck said. “I certainly don’t think she’s lying or making it up. It’s just the kind of thing we have to — as men, I think, as we become more aware of this — be really, really mindful of our behavior and hold ourselves accountable. And say, ‘If I was ever part of the problem, I want to change and be part of the solution.’ ”

There's good in there, but no one is asking Affleck to be part of the solution. Indeed, given his history, that may be a bad idea. Rather, people are just asking him to own up and, yes, stop abusing women. That's enough, thanks.

Really, the problem wasn't that Affleck was unaware of the broader problem of harassment or that he wasn't listening to women. Those aren't requirements for not mistreating women. Being a halfway okay human being is.

Also, one can't help but wonder, what about your brother, Ben?